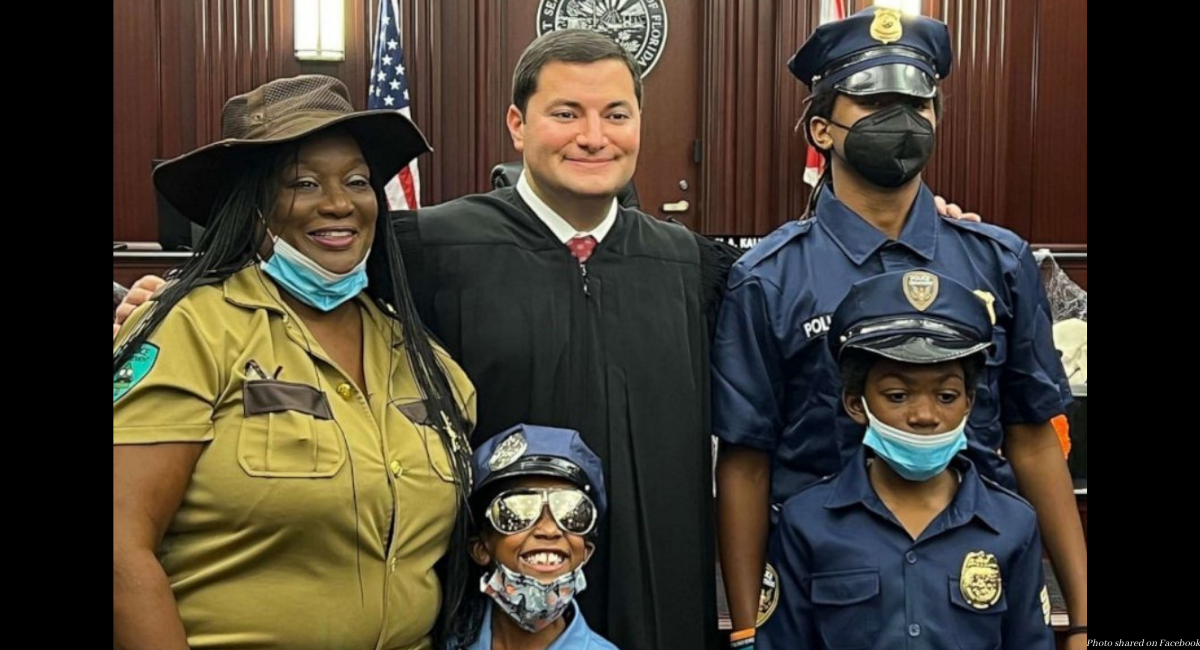 Since 1995, November has officially been National Adoption Month, and one adoption ceremony held in Jacksonville, Florida, made national headlines for its not-so-spooky Halloween theme. On Friday, October 29, 15 children were adopted by 11 families in a special Halloween ceremony complete with costumes and festive decor.

Eight-year-old Shyla Sheppard was one of the children adopted that day. She spent two years in foster care, and began attending day care at the start of her time with her foster family. Angie Sheppard, the day care owner and mom to five other kids, is now Shyla’s mom. Shyla, who wore a police officer costume, was named honorary bailiff for the day, and got to bang the gavel at the end of each adoption. “She had me in tears,” Sheppard told Good Morning America.

After attending Sheppard’s day care, Shyla asked Angie to be her mom, and after two years, when Shyla was available to be adopted, it became official. “When she came to day care again, I said, ‘Do you still want me to be your mom?,’ and she said, ‘Yes,’ and we started the process,” Sheppard said. “To know that she’s in a forever home now, I’m so happy and satisfied.”

Sheppard said she never expected to one day adopt a child, but she’s grateful she did, and has advice for other parents considering adoption or fostering. “She is the life of the house now. Everybody just fell head over heels in love with her,” she said. “Don’t be afraid. Take the leap.”

Jenn Petion, president and CEO of Family Support Services of North Florida, told Good Morning America special holiday celebrations like this one — which they called “Home for Halloween” — can do a lot to help the newly-adopted children adjust to their new families. “The holidays can be a particular particularly challenging time as they remember the family that they didn’t have and the pain of of not being able to be in a safe and loving home,” Petion, who dressed like Elsa at the ceremony, said. “So to have a finalization event that’s tied to a holiday really starts to change those memories and allows them to symbolize the start of forever, the start of something new, and that they really can have that wonderful happy ending.”

Many of the kids dressed as superheroes, and Petion said it was an emotional event for everyone. “I don’t think there was a dry eye in the courtroom,” she said.”I always think of our foster kids as superheroes, because they really have been through some of the most unimaginable things in their young lives. They are always superheroes in disguise.”

Judge Michael Kalil, who presided over the ceremony, told Fox News that this is always a happy event to be a part of. It’s the first in-person ceremony since the COVID-19 pandemic started. “Having an opportunity to oversee adoptions throughout the year, and be part of an extraordinary moment for each of the new families coming together, has been a joy,” he said. “So many children look forward to this time of year specifically because of all the holiday events they can participate in. I hope we’ve been able to bring that same level of happiness to the 15 children and 11 families we’ve brought together at today’s Home for Halloween event.”

According to Family Support Services of North Florida, there are approximately 2,000 children entrusted to their care, with 250 of them waiting to be adopted, and 1,200 of them placed with foster families. Petion said the number of children they care for rose by about 200 during the pandemic, and there’s a greater need than ever for families to come forward and help.

“We need families of all different types from diverse backgrounds and different stages of life to meet the needs of diverse kids in our system,” she said. “Whether that is a temporary parents in foster parenting, or whether that’s a forever home through adoption, we need a wide variety of families to match the special needs and abilities of our kids.”