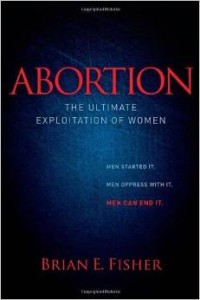 Abortion: The Ultimate Exploitation of Women reveals the dark, hidden underpinnings of the origination and propagation of the modern abortion movement. Written by Brian Fisher, Co-founder and President of Online for Life, a nonprofit pro-life organization, this behind-the-scenes look into the legalization of abortion-on-demand will give you keen insight into the root causes and damaging effects of abortion in our country. While painting a grim picture of the abortion holocaust and its causes, Fisher goes on to offer a practical yet compassionate strategy to completely eradicate abortion from our culture.

The original women’s rights movement was NOT behind the legalization of abortion. In fact, it was the author of the Equal Rights Amendment (ERA), feminist Alice Paul, who first referred to abortion as “the ultimate exploitation of women.”

Today, men oppress women both physically and emotionally through forced abortion. In fact, 64 percent of women in crisis pregnancies admit to feeling pressured by the baby’s father to terminate life.

A must-read for anyone interested in women’s rights, the sanctity of life, or ending abortion in America, Abortion: The Ultimate Exploitation of Women pulls back the dark veil that’s been disguising the abortion holocaust in our nation and exposes its hideous ties to racism, sexism, and eugenics. New York Times best-selling author and cultural warrior Eric Metaxas has this to say about Fisher’s book:

“This important book exposes two of the best-kept and dirtiest little secrets of our day: that selfish men often bully women into abortions and that countless women are profoundly hurt by this ‘choice’ in which they feel they had no real choice. The truth is finally getting out. It’s about time.”

The book was originally published in paperback last fall, but now Morgan James Publishing — one of the nation’s fastest-growing independent publishing houses — has announced that it will re-release the book in paperback. Copies will be sold through traditional book distributors in July. In preparation for the book’s July release date, Morgan James is now taking pre-orders for a paperback copy ofthis groundbreaking work. Readers can also purchase and download electronic versions via Amazon and Apple.