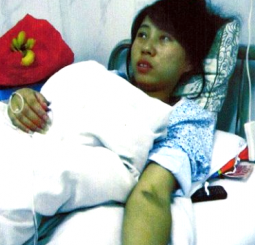 A shocking admission from one of the most secretive pro-abortion regimes in the world.

Several days ago, a horrific picture of an unconscious Chinese woman and her forcibly aborted unborn seven-month child lying next to her in a hospital bed began circulating on the internet.

Yesterday Chinese officials confirmed that the photo and story are “basically true” – a shocking admission from one of the most secretive pro-abortion regimes in the world.

An official at China’s “National Population and Family Planning Commission” has promised an investigation, but I wouldn’t hold my breath. Another Chinese official, the deputy chief of the local planning department, told the press that the woman (named Feng Jianmei) had agreed to have the abortion.

But a relative of Feng says she and her husband wished to keep the child, and news agencies are reporting that twenty agents of the Chinese family planning authority came and forcibly brought Feng to the hospital, where they performed the abortion on her against her will.

A report from the China-based human rights organization 64Tianwang indicates the woman, Feng Jianmei, was beaten and dragged into a vehicle by a group of family planning officials while her husband, Deng Jiyuan, was out working.

The officials asked for RMB 40,000 in fines from Feng Jianmei’s family and, when they did not receive the money, they forcibly aborted Feng at seven months, laying the body of her aborted baby next to her in the bed.

Forty thousand RMB is equal to about $5,000 – an extraordinary large sum for someone like Feng and her husband to pay. Some news outlets are claiming that Feng also couldn’t pay the fine because she is helping her mother pay for cancer treatment.

I think this story shows two important things: one, the silence surrounding China’s inhumane one-child policy is cracking, and more and more people are finding their voice to criticize and condemn what is happening. Second, we see once again the power of visual media – the photo which ignited protests around the globe is what forced China officials to admit what happened and made it harder for them to cover up the truth.

You can view the photo of Feng and her aborted child at this link (warning: graphic).

We will continue to monitor this story. There is some hope that Feng may be given an attorney to represent her against the Chinese government and the officials who beat her and forcibly aborted her child.

One thing that I wish would happen is that our own State Department would become more vocal and forceful in speaking out on behalf of the innocent women and children in China:

The US said Monday it has expressed opposition to China’s one-child policy after activists reported that a five-month-pregnant woman faces an imminent forced abortion in a separate case.

“We make no secret that the United States strongly oppose all aspects of China’s coercive birth limitation policies, including forced abortion and sterilisation, and we always raise these issues with the Chinese government,” State Department spokeswoman Victoria Nuland said. –AFP

Well, obviously, this issue needs to be raised again, and with more urgency. Because Feng and her child are not the only ones whose human rights are being violated every day by the Chinese government.

In a rare move, China has apologized to a woman who was forced to undergo an abortion at seven months of pregnancy and has suspended three family planning officials after gruesome photos of the mother and her dead unborn baby went viral on the Internet.