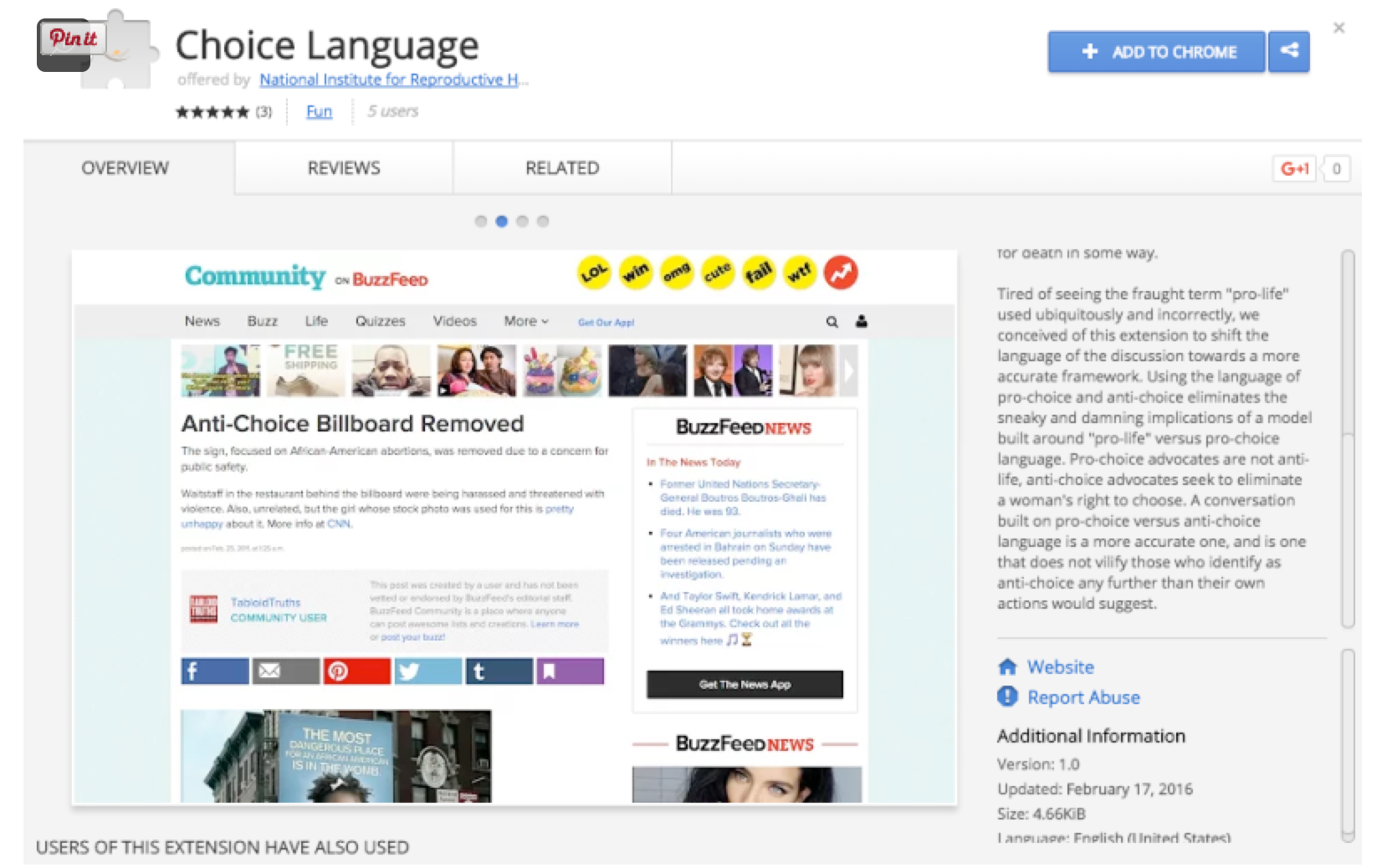 A new extension available for the web browser Google Chrome turns every use of  the term “pro-life” on websites and Google search pages to the term “anti-choice,” purporting to remove the inaccuracy of the term “pro-life.” Unfortunately, it does more than that–it actually changes the meaning of articles and alters text, misleading readers.

Tired of seeing the fraught term “pro-life” used ubiquitously and incorrectly, we conceived of this extension to shift the language of the discussion towards a more accurate framework. Using the language of pro-choice and anti-choice eliminates the sneaky and damning implications of a model built around “pro-life” versus pro-choice language. Pro-choice advocates are not anti-life, anti-choice advocates seek to eliminate a woman’s right to choose. A conversation built on pro-choice versus anti-choice language is a more accurate one, and is one that does not vilify those who identify as anti-choice any further than their own actions would suggest.

Below are samples of how the extension affects both web pages and search links: The link for the extension, Choice Language, on Google Chrome, explains it this way:

Those who stand against a woman’s right to decide what is best for her own body prop themselves up as righteous saviors using a problematic framework of rhetoric and religion. The term “pro-life” is inaccurate in this argument…as it serves to demonize individuals who are pro-choice by suggesting that in their support of a woman’s right to choose what is best for her own life, they also advocate for death in some way.

Pro-lifers don’t “demonize” abortion advocates simply by pointing out that abortion kills a living human being. NIR’s judgment against people who use the term “pro-life” as wishing to “demonize” those who are not indicates that it is actually the extension creators who are using language incorrectly. Changing language doesn’t change reality. And, in fact, “anti-abortion” would be a far more accurate term to use than “anti-choice,” which utilizes a euphemism for abortion – proving that even when insulting pro-lifers, abortion advocates still can’t seem to use the word “abortion.”

One reviewer chalked up this reluctance to fear:

Another suggested that euphemisms could be done away with entirely:

While making browser extensions that change anything is certainly a right–such as making a Facebook page into “pirate” language, for example–this idea goes too far, because it purports to know the thoughts and intentions of pro-lifers and it creates misleading text. Any true pro-lifer will explain that he or she is whole-life, mother and baby, “womb to the tomb,” as the saying goes. For NIR to decide to change language because they deem someone else’s use of it as “inaccurate” makes NIR into the language police. This isn’t a silly pirate language extension – this feels like a step into Orwell’s 1984. Some headlines and articles read “pro-life” for specific reasons. This extension changes not only connotation, but people’s direct quotations, with one reviewer remarking:

If the opposite extension were created, changing every use of “pro-choice” to “pro-abortion,” one has to wonder how Google would react.