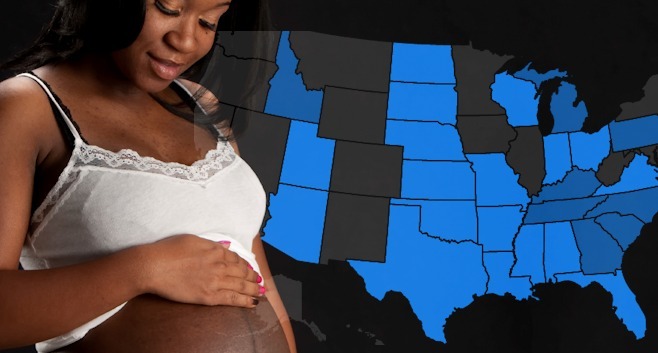 Pro-abortion research think-tank the Guttmacher Institute released a report  Monday on the state of abortion rights in the nation, and its takeaway is that hostility toward abortion is growing. That means that babies are being allowed to live. And the reason? Pro-life legislation. Guttmacher reports:

What this means for abortion in the United States, Guttmacher says, is that the “large number of recently-enacted abortion restrictions has dramatically reshaped the landscape for women seeking an abortion.” Indeed, Guttmacher’s own visual shows a remarkable change in the nation in just 14 years.

Guttmacher asserts that the entire South is hostile toward abortion, and adds that “much of the South, along with much of the Midwest, is extremely hostile to abortion rights.”

Despite the fact that people argue that we can’t legislate morality, Guttmacher says we can — and it doesn’t like it one bit. Blaming Republicans and conservatives in general, Guttmacher’s explanation for why 2014 included fewer abortion restrictions than the previous year:

The 26 abortion restrictions enacted in 2014 represent a significant decrease from the 70 that were enacted in 2013. Several factors likely contributed to this decline. First, legislatures in four states (Montana, Nevada, North Dakota and Texas) are not in session in even-numbered years, which are also election years; together, these four states enacted 15 restrictions in 2013. Second, election-year legislative sessions are typically several weeks shorter than sessions in non-election years. Finally, abortion increasingly competes for legislative time with other issues, including the minimum wage and the common core educational standards.

Some say that prayer is more important than politics; other say serving the people in need is most important. Prayer matters; serving practically through donations, volunteering, and even adopting matter. But stories like this show us that we must not discount the vitality of the political angle — not as an exception to these, but in addition. Pro-life politicians are the abortion industry’s worst fear, because electing pro-life legislators means changing laws and saving lives.

In many ways, the election (and re-election) of Barack Obama was the best thing that could have happened to the pro-life movement, and it has probably resulted in more lives being saved — despite his intentions. It caused a rallying cry to pro-lifers who were scared of his extreme abortion policies and views. People ran for office on pro-life platforms — and won — and pro-lifers all over the nation woke up and also cried out to others to see what they finally saw. Once that happened, it didn’t take long to see that climate change in regards to abortion — particularly at the state level.

If Guttmacher, who promotes abortion (and does legitimate statistical research), can see the power of the political climate in these restrictions, we should, too. The pro-abortion side continues to be threatened by pro-life legislators and leaders, and if there’s any takeaway for us, it’s that it’s working and we must not stop.

More than half the nation is either “hostile” or “extremely hostile” toward abortion. Turning that language around, we might say, “Over half the nation proactively fights for the lives of the unborn, and more babies are likely saved as a result.”