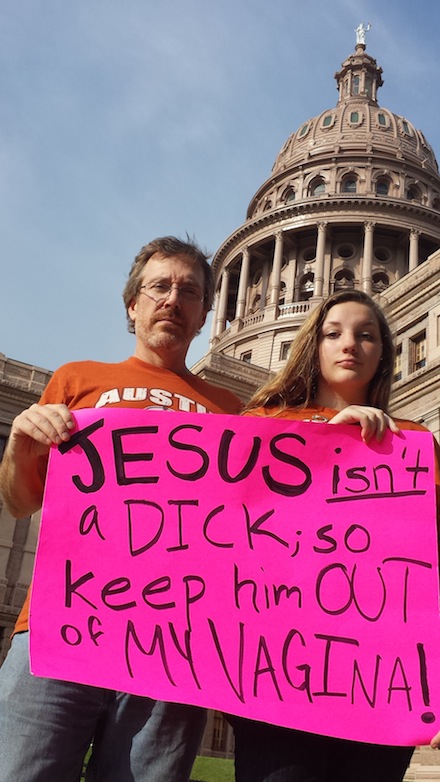 With her father by her side, Tuesday Cain proudly displays the sign she and a friend made for their protest against the 20 week abortion ban in Texas. A picture of her friend holding the sign went viral because it reads, “Jesus isn’t a dick; so keep him out of my vagina.” Her friend was the one in the photo seen ‘round the world, but Tuesday Cain wants everyone to know it was her idea.

In a guest post on xojane.com, Tuesday writes that she is passionate “about fighting for a woman’s right to choose and the separation of church and state in my home state of Texas.” While I can see that many pro-choicers think that being against abortion is all about religion, banning abortions after 20 weeks is more about the fact that 20 week old unborn children are unarguably human children. No one can hide behind the words embryo or zygote. Though they may call them fetuses, these children can feel pain, and can soon survive outside of the womb. They aren’t a part of a women’s body. They are their own unique human. And while I’m sure that God and Jesus agree with this, it’s the science behind it that makes impossible for the government to ignore that these children should not be aborted.

Tuesday also claims that an older man screamed at her and her friend saying that they should “become lesbians” because no man will ever want them. She says it isn’t very Christian and she’s right. But who says this man is a Christian. Not every pro-lifer is a going to be civil just like not every pro-abortionist is going to be civil. In fact, it was the pro-abortionist who were chanting “Hail Satan” in an attempt to drown out the sounds of pro-lifers singing Amazing Grace. It was the pro-abortionists who had bricks and tampons seized from them. Bricks and tampons as well as urine and feces which they planned to throw at pro-lifers.  According to reports, pro-lifers were escorted by police from the Capitol for their safety. There are people on both sides of the abortion debate who do horrible things in the name of their cause. And while I agree with Tuesday that it was wrong for this older man to call her ugly and scream at her, he is not a good representation of the pro-life movement.

Tuesday thinks that banning abortion after 20 weeks will put women’s lives at risk. But if an unborn child is viable, why would any abortionist need to kill her to save her mother? It’s a well-known fact that late term abortions involve inducing labor. Why not deliver a live baby?  Why not perform an emergency C-section? Doctors should be working to save both the mother and child, and mothers should be willing to put their lives on the line for their child.

Now that she has made sure to receive the credit for creating the sign, Tuesday plans on creating T-shirts to express her feelings. And while Tuesday says she knows a post-abortive woman who is now pro-life, it doesn’t change her stance. She says that this woman, likely with post-abortion syndrome, is one of the reasons she will continue to fight for abortion rights. And if witnessing someone’s pain and regret at killing her own children isn’t enough to instill a sense of wrong when it comes to abortion, perhaps an education will. Tuesday is fourteen and she wants to be a science teacher. It is my hope that in learning about science, Tuesday will soon see that even females in the womb deserve rights, no matter the religion of their parents.