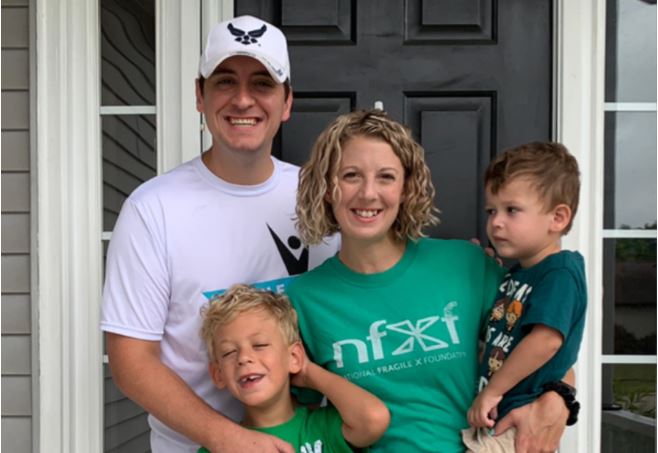 July 22nd was particularly significant for Lisa and Adam Fowler and their sons Logan and Ethan. It was National Fragile X Awareness Day, and both boys have Fragile X syndrome. Lisa posted on social media each day in July, sharing facts about the genetic syndrome and stories of their family’s experience with it. She also spoke with Live Action News, sharing her thoughts on abortion and IVF as ways to avoid having children with the condition.

On social media, Lisa educated her followers about some of the common traits of individuals with Fragile X, such as “a long and narrow face, large ears, a prominent jaw and forehead, unusually flexible fingers, flat feet, lazy eye, [and] high palate.” She also shared typical symptoms such as “sensory hypersensitivity processing difficulties, speech difficulties, shyness and anxiety, repetitive movement, perseveration and hyperactivity, inattention and impulsivity” as well as “aggression, hypotonia (low muscle tone), frequent otitis media (ear infections) and sleep disturbances.” In each post, she explained how the particular symptoms she described have or have not impacted her own family. Besides the challenges that children living with Fragile X experience, she also highlighted some of the particular strengths that come with the territory.

Lisa recalled that she had concerns early on that Logan, now seven years old, was not developing typically. She noted that as a baby, he seemed physically “floppy.” She would later learn that hypotonia or poor muscle tone is characteristic of Fragile X. Though well-meaning people told her to just give him time, Lisa explained, “We were fortunate to have an excellent pediatrician who advocated for him to get tested.” After an MRI around 12 months-old came back unremarkable, a neurologist recommended genetic testing. When Logan was right around 18-months-old, they received a phone call telling them that he had Fragile X. Lisa and Adam met with a genetic counselor just a week later.

“The first word that comes to mind [about that experience] is ‘awful.’ The genetic counselor’s job is to paint the worst picture, to be very realistic. We learned that like autism, Fragile X is a spectrum,” she told Live Action News. “Every individual with full mutation Fragile X will have a disability, but some will be less ‘affected’ than others. [The counselor] made it feel very grim.” The next step, she said, was “to map the family tree, to see how the gene passed from us to Logan.”

Fragile X Awareness Month Day 23: Perseveration: the continuation of something (as repetition of a word) usually to an…

After Lisa, Adam, and some of their extended family underwent genetic testing, they learned that Lisa is a carrier for Fragile X, and that she received the gene from her father, who was already deceased. She learned that “any future child of ours would essentially have a 50/50 chance of having Fragile X. I carry the gene on 1 of 2 x chromosomes. If a future child does receive the affected X, it comes down to how it duplicates. I have 106 CGG repeats, so I’m considered a premutation carrier. More than 200 repeats is defined as full-mutation Fragile X syndrome.” Given the odds of future children having Fragile X, Lisa noted that “we were never pressured, but [doctors] certainly mentioned” the possibility of using IVF to conceive any future children. Before they conceived their second son Ethan, now two, Lisa and Adam met with an IVF specialist to assess “what does that process look like?” She said, “We appreciated [the doctor’s] candidness. He told us not to try to have children naturally because I was a permutation carrier. He told us that if we were to use IVF, ‘we’ll throw away all of the boys and test all of the girls'” to weed out the possibility of having another child with Fragile X.

“When he said, ‘we’ll throw away all of the boys,’ I knew that that was not an option for us,” said Lisa. “I believe that a life is a life, and that a life is important. I know that other families have chosen to go the IVF route, and somewhere deep down I get it. We grappled too with that choice. Ultimately, I think that abortion and IVF are huge issues, especially when it comes to weeding out a genetic outcome. If you believe that life is sacred, there’s really no justification for abortion. Both my boys have brought so much light and joy to those around them, not just our extended families. I think that choosing not to allow that into the world would have been a mistake.”

Lisa has encountered many women in Fragile X groups on social media who are receiving a diagnosis for the first time, and she tries to share words of comfort and understanding with them. “When we got the diagnosis, it felt like the end of our world, very grim,” she explained. “It was life-altering, life-shattering from everything we’d expected for what our family would look like. Overtime after our world was shattered, we were able to pick up those pieces. I’ve heard it compared to making a mosaic, you use those shattered pieces to make a picture that’s beautiful. Yes, it’s hard in the beginning, but it gets better. Yes, some days, even now, Fragile X feels like a heavy burden. But there are lots of aspects of this syndrome that are positive. Our boys are joyful, loving, caring people. Our children bring joy to so many people, and our life is beautiful.”

When asked how relatives and friends can be supportive of a child with Fragile X and his or her family, Lisa advised, “listening, learning, and not judging.” She noted, “Learning helps you understand so that you can interact with the child. Ultimately, as Logan and Ethan’s parents, we want what all parents want — for our children to be accepted, loved, and to have a circle of people around them who will lift them up.”

She said that while they may not know what the future holds for her sons, she expects them to have a long life and she wants to plan for their future. “We will help them do everything they want to do and surround [them…] with people who love them and support them,” she wrote. “We will do our best to provide for them and prepare them so they can have a full, happy, beautiful life!”