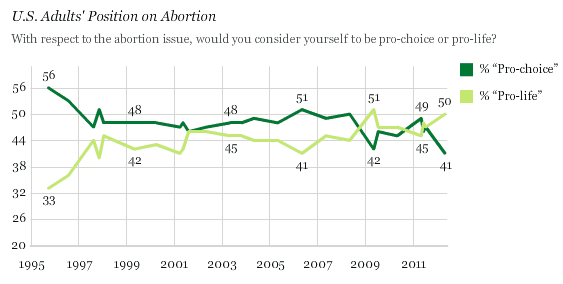 The pro-life movement is (and has been) gathering steam!

That’s how the well-known polling firm Gallup introduced its latest findings on Americans’ views about abortion. Here is the latest chart, which goes back to 1995 – notice the sudden decline in “pro-choice” views over this past year (the dark green line):

As you can see, from roughly 1998 to 2008, Americans were about 10+ points in favor of being “pro-choice.” Now, in 2012, they have flipped and are almost 10 points in favor of being “pro-life.” These past four years of flipping back and forth show, I think, how much people are wrestling with their previous views about abortion and how many of them are changing their minds.

This swing upward in pro-life support is especially significant considering how much time Democrats have spent this past year accusing Republicans of waging a “war on women” and how fiercely Planned Parenthood has attempted to oppose pro-life legislative progress in the states.

I think these new poll numbers also reveal that this charge by Democrats and these efforts by Planned Parenthood have largely failed and that instead, strong pro-life female voices are successfully carrying their message across – which include figures like Live Action’s own communications director, Kate Bryan!

All of this shows the success of the pro-life movement in helping people see through the myth of being “pro-choice.” Now more than ever before, it’s up to us to continue to win over hearts and minds, to continue to be pro-life witnesses to the culture in how we live, through our activism, and with our words.

One good start would be to help us get the word out by sharing this post. Americans are abandoning the lie that one can be “pro-choice” when it comes to something as fundamental as the right to life and dignity of all human beings, born and unborn!