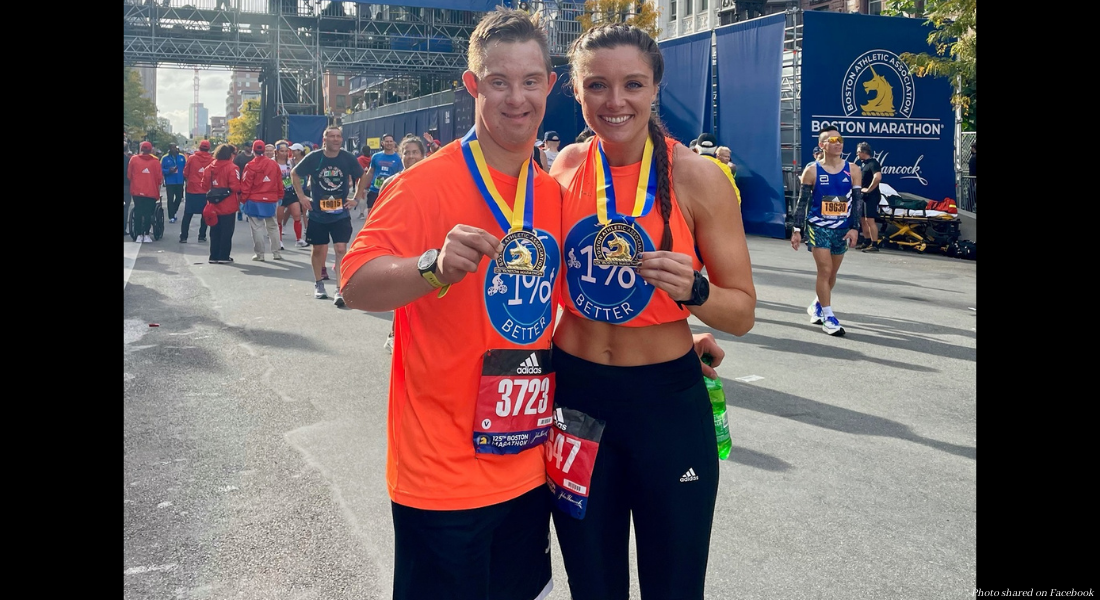 Last year, Nikic became an international sensation when he completed the Ironman Florida triathlon, one of the most difficult athletic events in the world. The race consists of a 2.4-mile swim, a 112-mile bike ride, and a 26.2-mile marathon run, and Nikic completed it in 16 hours, 46 minutes and 9 seconds. He was then awarded the Jimmy V Award for Perseverance during ESPN’s ESPY awards, as well as the award for Best Athlete With a Disability in the men’s category.

Despite these accomplishments, Nikic isn’t slowing down anytime soon. He recently announced his plans to not only continue competing in Ironman triathlons, but to run the Boston and New York City Marathons. And he’s just crossed one of those items off his list.

Before the marathon, Nikic wrote on Facebook that he hopes to see more people like him in the future. “I believe I’m the only person with DS running Boston Marathon,” he wrote. “Next year would be great if @bostonmarathon there were ten and they had an ID category like @ironmantri. Being the oldest would be great if it was the First to have an ID category for our Special Olympics friends. Anything is possible.”

After completing the marathon, Nikic spoke with CBS Boston. “It’s such an amazing day,” he said. “When I tackled those hills, it was tough, but I knew that I could make it. Every mile I ran for someone… and mine is my mom. I knew that she would come, and I couldn’t have done this without her.”

His mother, Trish Nikic, had tears in her eyes when she spoke about her son. “I can’t say it was a dream come true because it was never a dream. Because all of this just unfolded,” she said. “He was three years old just using a walker to walk. So I can’t even tell you how overwhelmed I am at what he has done in the last few years through Special Olympics number one, and then Ironman, and then to be invited here to Boston.”

Nikic’s dad, Nik Nikic, pointed out in an interview with Click Orlando that these events mean much more to Chris than just the competition.

“It was amazing. Just watching the excitement and all the people. He really got a chance to meet a lot of people, get a lot of hugs,” he said. “For him it’s not about finishing in a certain amount of time — six hours was a good target — it’s about having fun and about being out there so people can see that individuals with Down syndrome belong here as well. He’s opening doors for other people like him. For instance, there were no other individuals, as far as we know, out of 20,000 participants, with an intellectual disability here, and so we think that needs to change.”

Both Nik and Chris Nikic say that the success is due to Nikic’s 1% motto: to do 1% better each day. “[I]t’s essentially just one more every time he works out. He started out with one push-up, one sit-up, one squat. Eventually, he got to 200. Now, he’s up to 380,” Nik Nikic said to CBS Boston. “Chris is just getting started. Imagine at 1% improvement what Chris can do at 25. By 30? By 35? By 50? Wherever we’re starting, this process can make our lives that much better going forward.”

Next for Nikic is the New York City Marathon, which will take place on November 7.