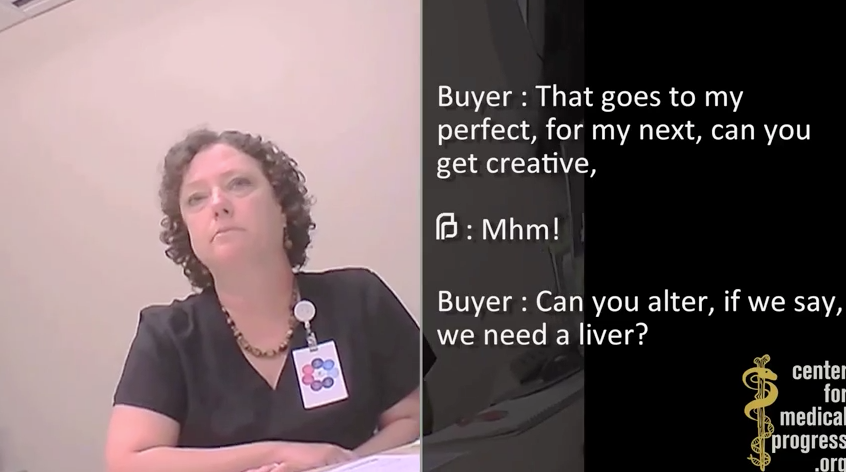 Prior videos have shown that Planned Parenthood advocates for modifying the abortion procedure – which likely even involves the illegal partial-birth abortion technique – in order to ensure the children they abort come out more intact, for the buyer’s sake.

Modifying procedure for the purpose of harvesting organs and body parts is illegal.

This latest video features Melissa Farrell, who is the Director of Research at Planned Parenthood Gulf Coast. The video mentions that:

From the start of the video, Farrell casually suggests that they are more than willing to modify the abortion procedure:

And we bake that into our contract, and our protocol, that we follow this, so we deviate from our standard in order to do that.

Telling you this, so then we can get creative about when and where, and under what conditions can we um, interject something that is specific to the tissue procurement needs.

When the buyer asks, “can you get creative?” Farrell interjects to agree. She also agrees when the buyer asks if they could “adjust the procedure…” in order to “match that [the buyers’ need] in a high volume…”

Farrell also makes an admission that raises questions about the standards of the abortion facility:

Farrell: How many weeks, other, where it’s placed in the uterus, we’re going to potentially be able to have some that will be more or less intact, and then some that will not be.

Farrell is not only willing to modify the procedure, but the abortionists for the Houston PP facility have already been doing so – all in the name of “project needs.”

Farrell: So, but it’s something that we can look at exploring how we can make that happen so we have a higher chance.

Farrell: It’ll probably also require a little bit of input from the doctors, ’cause the doctors are the ones asking, directly doing that, and you know, when it matters, you know in the cases of when it’s mattered, you know, physicians,

Farrell: Also need an intact specimen, they can make it happen.

Farrell: So we just need to figure out how, that we can do this you know. under you know, our project needs.

In talking about the Houston PP providers who perform abortions beyond 16 weeks – there are six of them – Farrell goes into more detail:

Because some of our doctors in the past have projects and they’re collecting the specimens, so they do it in a way that they get the best specimens, so I know it can happen.

Later in the video there is a mealtime discussion about changing abortion procedure and the financial benefits:

Buyer: … So I’m glad that you have that background, so that you see the financial benefits of

Buyer: Of getting the right specimen and getting it intact, and if you change the procedure just a little bit within

Buyer: the framework that you said so that we’re all talking about it the same way, and the right way, but the financial gain, and being, to your staff, just knowing this is the end we’re going for…

The video then goes back to the meeting with Farrell and makes this telling point:

Farrell: Yeah, and so if we alter our process,

Farrell: And we are able to obtain intact fetal cadavers, then we can make it part of the budget, that any dissections are this, and splitting the specimens into different shipments is this. I mean that’s–it’s all just a matter of line items.

Later still, when viewing the fetal parts of an aborted baby, one of the Planned Parenthood employees notes the willingness of a particular abortionist to change procedure:

PP: One of them [abortion doctors] came from the Family Planning Fellowship at Columbia, an active researcher, and so she’s very well-versed in what she needs to do.

Buyer: To just, change up just a little bit?

For the fifth video to show that Planned Parenthood employees – including and especially those at the top – are so casually willing to discuss and go through with a modified abortion procedure, all for the sake of a buyer, suggests a dangerous pattern.

Planned Parenthood does not care about women, and they certainly don’t care about respecting the bodies of babies they’ve just aborted.

They care about the buyers.

(Editor’s note: For more on how Planned Parenthood is breaking federal law and modifying abortion procedures around the nation – endangering women for the sake of benefiting buyers – see this article.)