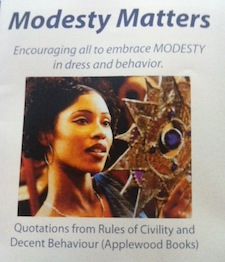 No cause for war is too petty!

Nothing is more certain to freak out pro-aborts than suggesting that sexuality should be accompanied by a degree of responsibility. On Friday, ThinkProgress reported on a Modesty Matters pamphlet distributed at the Family Research Council’s 2012 Values Voter Summit:

Modesty Matters criticized women for dressing “immodestly” at church, and blamed women for causing men to stare lustfully at them.

Women must “embrace MODESTY in dress and behavior,” one of the handouts read. Women dressed immodestly in church are “an insult to a holy God,” another said.

– From the “Modesty: It’s nothing to be ashamed of” pamphlet:“Since men are particularly visual, immodesty in church can trigger lustful thoughts.”

“My men’s bible study group talks frequently about controlling our lust, thoughts, and eyes. Yes the problem and responsibility are ours, but is it really reasonable for the women of the church to make it THIS difficult for us?”

– From the “True Woman Manifesto”: “All women, whether married of single, are to model femininity in their various relationships, by exhibiting a distinctive modesty, responsiveness, and gentleness of spirit.”

I’ll be the first to agree that men have every bit as much responsibility to be sexually mature and prudent as women. No matter how sexily a woman is dressed, basic decency demands that men treat her with respect and resist whatever temptation they may feel to take advantage of her or betray their own significant others.

But right out of the gate, one omission should raise suspicion: if the people at ThinkProgress have the pamphlet, why doesn’t their article include or link a full version that readers can judge for themselves? We’ve noted before how ThinkProgress distorts and omits facts to suit its agenda; could it be that they’ve left out quotes that do place equal responsibility on men? (I’ve sent inquiries to ThinkProgress, FRC Action, and Modesty Matters about the pamphlet, and I will update if I receive a response.)

For what it’s worth, though, the above image from the pamphlet mentions “quotations from Rules of Civility and Decent Behaviour (Applewood Books),” a famous collection of advice revered by noted Old White Guy George Washington, which includes such admonitions as “Put not off your Cloths in the presence of Others, nor go out your Chamber half Dressed” and “In your Apparel be Modest and endeavor to accommodate Nature, rather than to procure Admiration keep to the Fashion of your equals Such as are Civil and orderly with respect to Times and Places.” Neither says anything about applying to only one sex. How controversial!

As for Marcotte, her argument is – as usual – a parade of lazy, clichéd mischaracterizations that can be distilled to two basic points. First, modesty is code for “second-class status” and “trying your best to be invisible,” or the idea conservatives are really “trying to shame women out of wearing clothes that make them feel attractive.”

Marcotte seems to have a mental block that simply will not let her rationally consider the possibilities that maybe there’s a time and place for different modes of dress, that maybe there’s a downside to emphasizing one’s sex appeal in everyday wear. Despite Marcotte’s use of the term “mandatory,” nobody’s calling to enshrine dress codes into the law; one group is merely sharing its perspective on how to control one of the human race’s most powerful impulses.

I assume that even Amanda Marcotte’s not so far gone that she favors public nudity, meaning she at least partially grasps Modesty Matters’ underlying rationale. So somewhere, there is a line of good taste between “stark naked” and “burqa” after all. Yet Modesty Matters is unreasonable for discussing it? And no, it’s not that she simply thinks the group takes it too far – note that she doesn’t propose her own alternative clothing standards or critique a particular standard posited by the pamphlet. To her, merely raising the subject is outrageous.

Second, because the pamphlet doesn’t mention abortion, somehow that illustrates the “anti-woman and anti-sex roots of their hostility to” abortion. No, seriously:

What’s interesting is that neither of these arguments for or against mandatory modesty mentions “life,” the supposed concern of conservative Christians who pass laws controlling female sexuality by attacking reproductive rights. Even the most strained Christian rationalizer who has convinced him or herself that merely looking at a birth control pill causes spontaneous miscarriages of nine-month pregnancies isn’t crass enough (yet) to argue that a man’s stray glance at a woman’s legs in a miniskirt takes any kind of “life.”

Not only does Marcotte go on to again out herself as biologically illiterate (or pretending to be) by equating sperm cells with unborn human beings, but she may have set a new world record for straw-grasping. The Summit – like many large political gatherings – had many different exhibitors, each with different interests, businesses, and focuses. Modesty Matters isn’t a political or pro-life advocacy group, but a small business that sells sewing patterns and courses for modest clothing.

Why do they need to wade into the abortion debate? Why can’t they simply be interested in and value their modesty message for its own sake? And how does FRC giving them a table even remotely call into question the sincerity of the pro-lifers in attendance?

Marcotte’s warning that conservatives and pro-lifers see women as “creatures put on earth to serve men” (by…not dressing in man-pleasing ways, apparently) might not be so laughable if these people didn’t see misogyny and oppression around every corner. But when outrage becomes an industry, when your entire raison d’être is to keep a particular demographic group perpetually offended and fearful, no cause for war is too petty.