The National Organization for Women (NOW) claims it was the first women’s organization to pass a resolution in favor of liberalizing abortion. NOW founder Betty Friedan openly admitted it was men (Lawrence Lader and Bernard Nathanson) who persuaded her to make abortion part of NOW’s agenda. As a result, abortion drove a wedge within NOW’s membership, resulting in several pro-life members departing the organization.

In 1975, syndicated columnist Nick Thimmesch detailed the dismembership of Karen Lorene Ahern from a NOW chapter in Fresno, California.

“I was hounded out after they learned I was in the pro-life movement,” Lahern told Thimmesch. “They would change meeting places and times without telling me and hassle me at meetings. It’s ironic that I can’t be for equal pay and the other issues and still be against abortion.” 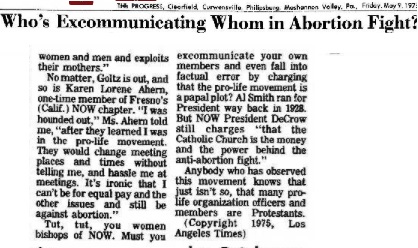 Karen Lorene Ahern ousted by NOW for being prolife

Pro-life feminist on abortion: “These men have women right where they want them”

Pat Goltz joined NOW’s Columbus, Ohio, chapter in 1970 because she opposed the feminist movement being taken over by radicals with a pro-abortion agenda. She wanted to influence members toward a pro-life view. “I was opposed to them taking a stand in favor of abortion because I didn’t want them corrupting the feminist movement with that because it was so evil…. They weren’t interested,” Goltz told Live Action News.

Goltz became unpopular with NOW leaders after referring to the abortion industry as “baby terminators,” and calling abortion a “male chauvinist rip off.”

In May 1974, Goltz told a pro-life audience (reports The Fairborn Daily Herald) :

The baby terminators argue that abortion gives the woman the right to control her own body, but when men are making millions of dollars from women trying to control their own bodies I say abortion is a male chauvinist rip off. When women call this rip off liberation these men have women right where they want them…

The feminist movement is dedicated to the gaining of rights for minority groups of which the unborn is unquestionably the most helpless and yet I was kicked out of the National Organization for Women (NOW) because I insisted on defending the right to life of these babies. 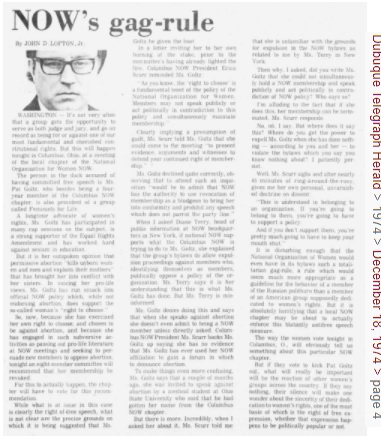 No “right to choose” freedom of thought in NOW

Goltz’s conflict with NOW was detailed in December 1974 by commentator John D. Loften, Jr. “It is her outspoken opinion that ‘permissive abortion’ kills unborn young women and men and exploits their mothers, that has brought her into conflict with her sisters,” Loften wrote.

“In voicing her pro-life views, Ms. Goltz has run smack into official NOW policy, while not endorsing abortion does support the so-called women’s ‘right to choose.’ So, now, because she has exercised her own right to choose, and chosen to be against abortion, and because she has engaged in such subversive activities as passing out pro-life literature at NOW meetings and seeking to persuade new members to oppose abortion, tonight, an eight member committee will recommend that her membership be revoked.”

Loften scathingly wrote, “In a letter inviting her to her own burning at the stake, prior to the committee having already lighted the fire, Columbus NOW president Erica Scurr reminded Ms. Goltz (emphasis added):

As you know the ‘right to choose’ is a fundamental tenet of the policy of the National Organization for Women. Members may not speak publicly or act politically in contradiction to this policy and simultaneously maintain membership.

Loften, then inquired of NOW’s chapter president how NOW could remove membership based on Goltz’s beliefs.

Goltz told Live Action News that she was expelled from NOW after that meeting.

“They voted against me as soon as I left the room. They can’t defend a bad point of view. They have to stifle a good point of view,” Goltz said. “A lot of these women have had abortions and suffered terribly — so they have to get more and more to agree with them so it is justified. At that meeting I defended the rights of unborn women, and they didn’t like it.”

The founding of Feminists For Life

Banishment from NOW did not deter Goltz, who, in 1972, co-founded Feminists for Life (FFL) with Catherine Callaghan.

“Pat and Catherine were deeply disturbed because the women’s movement was caving into the demand of the patriarchy by allowing itself to be used by rich industrialists, the population control movement and the playboy movement….” wrote former FFL president Rachel MacNair.

“They believed that feminist organizations were failing to provide viable alternatives to abortion for individual women and abandoning them to abortionists and abortion referral services who would exploit their misery.”

“Pro-life feminism is the wave of the future and its time has come. People are coming to realize that abortion, which kills innocent children, is not in the best interests of women either,” Goltz told the Athens Messenger in 1974. Apparently many women joined Goltz in her view, as the paper was forced to admit that within just months of their incorporation, Feminists for Life had encompassed members in 30 states and several countries.

Thanks to the courage of many pro-life feminists like Goltz and Ahern, the pro-life movement has flourished.