It’s been over two years since The Center for Medical Progress (CMP) released its first video revealing how Planned Parenthood was profiting from the sale of aborted babies’ body parts. In that time, both the Senate Judiciary Committee and the US House Select Investigative Panel on Infant Lives have launched investigations not only into Planned Parenthood, but also into fetal cell procurement organizations, as well as other abortion facilities and abortionists. These investigations by both Senate and House committees have resulted in criminal referrals to the FBI and the US Department of Justice (DOJ).

Despite overwhelming evidence that, at the bare minimum, begs deeper investigation by the nation’s justice officials, those referrals have sat, seemingly untouched, for months and months. Why have the DOJ and FBI not yet acted in the interest of the American people to launch a full-scale investigation into every organization implicated in these referrals? This seems to be a miscarriage of justice.

The list of congressional referrals to various state and federal agencies is long. The House Select Panel on Infant Lives posted an extensive list of 14 referrals in December 2016. Many of the referrals involve suspicion of breaking federal laws, including the law that bans the buying or selling of human fetal tissue (42 U.S.C. § 289g-2). Other referrals allege violations of HIPAA privacy laws. Even more disturbing are allegations, based on witness testimony from nurses, that an abortionist violated the the Partial-Birth Abortion Ban Act of 2003 as well as the Born-Alive Infants Protection Act of 2002 by delivering live babies before personally killing them. There are myriad other letters to state and federal officials referring various abortion industry workers and agencies for criminal charges. 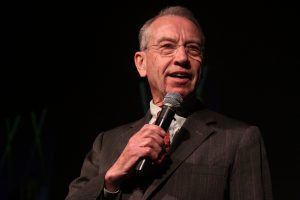 The fact that there are eyewitness accounts from several nurses that babies were born alive but deliberately killed at the hands of an abortionist demands an investigation in and of itself. Yet there has been none, to anyone’s knowledge. Just this past week, CMP’s lead investigator, David Daleiden, reported that the FBI has confirmed receipt of the criminal referrals. A letter dated June 19, but not publicized, was sent to the Senate Judiciary Committee Chair, Charles Grassley. In April, Grassley wrote to Attorney General Jeff Sessions, and then-FBI director James Comey, saying:

I am writing to inquire about the actions the Department of Justice and the FBI have taken in response to criminal referrals I made late last year. After a lengthy and detailed investigation by the Committee into paid fetal tissue transfers, I wrote to Attorney General Lynch and Director Comey on December 13, 2017, to refer eight organizations for investigation and potential prosecution for violations of the law that bans the buying or selling of human fetal tissue, 42 U.S.C. § 289g-2, and the criminal conspiracy statute, 18 U.S.C.§ 371. The organizations referred were:

Grassley requested a response by May 8, but he did not receive one until July. Apologizing for the delay, FBI’s Gregory A. Brower wrote then:

We can confirm the Criminal Investigative Division (CID) of FBI Headquarters received your referrals and sent them to the relevant FBI field offices for review and whatever action is deemed appropriate.

This letter came six months after the referrals were sent, and continues to leave the public asking why even confirming receipt of the referrals, let alone launching investigations of such serious charges, has taken more than half a year. However, Breitbart News reports that the FBI makes a practice of neither confirming nor denying specific investigations, leaving the matter a guessing game in the minds of stakeholders.

Two short years ago, Planned Parenthood’s senior-level leadership were caught on camera flippantly negotiating prices and criminal abortion methods to sell aborted baby hearts, lungs, livers, and brains. After over a year of comprehensive, nationwide investigation, two congressional committees uncovered tens of thousands of pages of documents showing system-wide criminality in Planned Parenthood’s scheme to sell baby body parts from intact aborted children… an atrocity against humanity that deserves the full attention of the FBI and the U.S. Department of Justice.

Daleiden’s language, while strong, is also accurate. The accusations do represent atrocities against human beings. Even legalized abortion has its limits, and killing babies who are born alive is one of those limits. It wasn’t too long ago that Kermit Gosnell was exposed for doing the same thing in his “House of Horrors,” and yet the delay in investigating multiple other houses of horror drags on, at the expense of an untold number of babies who have no opportunity to speak for themselves.

Those charged with upholding justice in the nation, as well as in the states that receved referrals, have an obligation to respond and act with a thorough and prompt investigation. That a high ranking senator had to wait three months to even receive a response about whether the FBI received the criminal referrals indicts the slogging feet of many officials since CMP first broke its story.

It’s worth noting that the state of California wasted no time in pursuing Daleiden and CMP, trying to turn the tables on the investigators. While one state’s officials went after those attempting to expose their political ally, Planned Parenthood, that state sits, along with other states and the nation, on its proverbial hands when it comes to pursuing justice for the most helpless of all victims. If these officials believe the abortion industry has done no wrong, they should investigate and show evidence to support that belief. If, however, they discover that the CMP and congressional investigations are accurate, to refrain from prosecution for fear of political implications would be a grave injustice which would only serve to benefit the wealthy and predatory abortion industry.

In a tragically ironic contrast, Breitbart reported this story in the same time frame as the FBI issued its response to Grassley, noting:

The Trump Department of Justice (DOJ) has yet to respond to letters from the chairs of congressional committees that made criminal referrals regarding allegations that Planned Parenthood and its partners in the biomedical procurement industry profited from the sale of the body parts of aborted babies.

In a stunning contrast, however, the DOJ has indicted 15 individuals for illegally trafficking the body parts of eagles and other migratory birds…  following a two-year undercover operation known as Project Dakota Flyer, the U.S. Attorney’s office in South Dakota announced the indictments of 15 individuals for illegally trafficking eagle body parts.