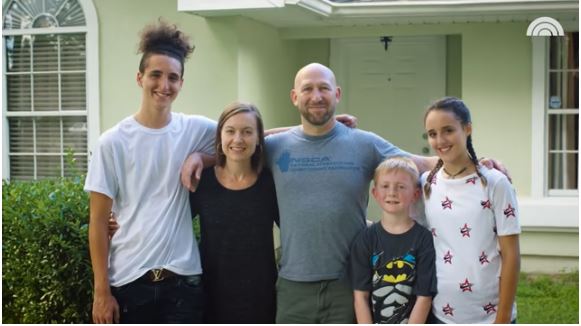 “I wish people understood that all kids weren’t bad. They have good inside them, not just the bad part.” That’s 12-year-old Lauren Cano, who, along with her 15-year-old brother Nelson, was adopted by Jeremey and Joslyn Ahlgren over two years ago after they were removed from their mother’s home due to concerns for their safety. Their father, whom they hadn’t seen in a while, was in prison.

Nelson told TODAY that their mother used to take him to school and pick him up from school drunk. She was drunk so often that he says he missed her when she was sober. “That’s how much she drank,” he explained.

When they were removed from their mother’s home in 2015, the siblings spent a year in foster homes. Then in 2016, after their mother was found to still be unable to offer her children a safe and secure home, they were placed for adoption.

Adoptive mom Joslyn Ahlgren explained to TODAY that her sister had been adopted, and a conversation years ago with her mother about how older children have trouble being adopted “planted a seed” in her heart and mind.

According to AdoptUSKids, each year about 20,000 kids age out of the foster care system. Depending on the state in which they live, that could be when they turn 18 or 21, or when they graduate from high school. Aging out of the foster care system means these children never find families. They never have parents to help them navigate life. They are at increased risk of poor educational outcomes as well as unemployment and homelessness.

Joslyn and her husband Jeremey knew they could offer older kids what they needed. They have one young son, and in 2013, they adopted Glen, a 15-year-old who needed a family. A few months after Glen, now 20, moved out, the couple felt an absence in their home. So when the call came that a pair of siblings needed a quick placement for adoption, the couple immediately said yes. Nelson and Lauren moved in just days later.

“It was really scary. It was really hard,” said Lauren. The kids were nervous, but soon, their walls began to come down.

“The first month that they were with us, both of them, especially Lauren, would just talk about everything,” said Joslyn. “You could tell that every time she would tell a story, she would become lighter. You could see her peel away all these layers of like, ‘I need to talk about this. I want to share this with somebody.’ And it was so… it was just awesome seeing both of them turn into themselves over that short period of time.”

READ: Teen brings adoptive mom to tears: You’re ‘the best thing that ever happened to me’

The couple knew that there would be challenges, but they adapted and changed their parenting style to focus on simply living life together and respecting each other.

“It’s about love and support,” said Jeremey. “So you’re not gonna like everything your child does. That’s life, whether they’re adopted or biological. But one thing I’ve learned from my children and from my wife is it’s about being loving and just being there for them.”

That love and support are what Nelson and Lauren needed. They needed a safe home with parents who were present and patient.

“I’ve changed a lot,” said Nelson. “I used to be super disrespectful. Super disrespectful. I got in trouble a lot. But it’s like everything makes sense now. I just guess I have don’t have a reason to be angry anymore. I guess I was just sad.”

Moving in with strangers was difficult and Nelson says that “at first it was weird.”

It can be difficult for older children in foster care to find adoptive homes because potential families are often looking for babies or young children. A lot of that is because of fear, says Joslyn. Fear that the children won’t bond with them or that they will have faced so much abuse in their lives that they are unreachable.

“I think it’s different than with a baby,” she explained, “but it’s so gratifying when you get to that point [of bonding].”

For the Ahlgrens, adopting older children was the right thing to do because they knew that they could fill the needs that these children had. Despite any struggles that would inevitably come, they were up for the challenge and it has been a huge blessing in their lives.

“They’re just our children to us,” said Jeremey, “and we just happened to get them later in life.”