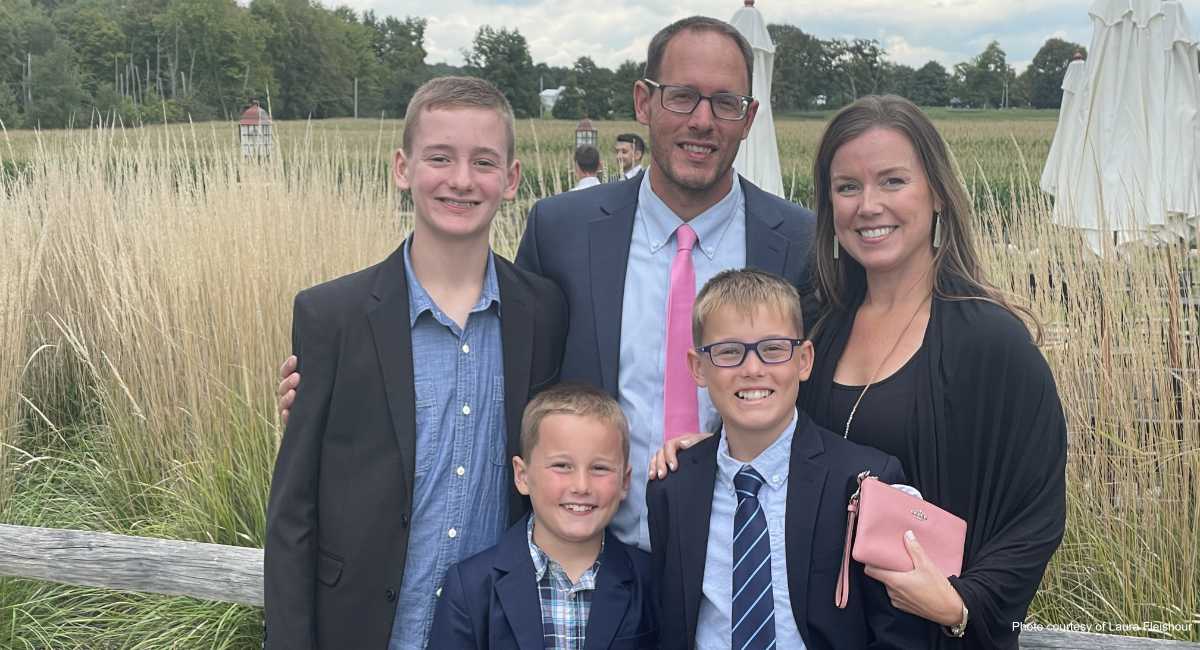 Author’s Note: One in four pregnancies ends in miscarriage and 24,000 infants are stillborn every year in the United States. As October is designated National Pregnancy and Infant Loss Awareness Month, it is a time to honor the lives of precious children lost in infancy. While there may not be a simple solution to easing the grief caused by such loss, it is important to know that positive outcomes can be birthed by tragedies.

In 2006, Laura and Cole Fleishour had been married two years when they got the happy news that Laura was pregnant. Excited, they began preparing to welcome their first child into their loving, Christian home. At first, it was a typical pregnancy with everything progressing as it should. But at an 18-week ultrasound, the Fleishours’ world suddenly changed.

Laura told Live Action News, “Our ultrasound revealed that something was wrong with our baby. Doctors were telling us that we had a 25% chance of our child having Down syndrome.”

But it wasn’t until Laura was referred to specialists by her OB/GYN where she underwent a battery of tests that they learned her baby, a girl, had a rare condition called “triploidy.” Humans normally have 46 chromosomes but a baby with triploidy has 69 chromosomes — a full set of extra chromosomes — and survival is rare.

Upon her diagnosis, the specialists informed the Fleishours that they needed to decide quickly about having an abortion, because Ohio law allows abortions up to 20 weeks — and her pregnancy was nearing that timeline. Laura was heartbroken. “I arrived at the hospital that day thinking there was a glimmer of hope for my baby and left with the option to end her life,” she said.

READ: Young mom chose life, then lost son to stillbirth: ‘Cherish the life that was once lived’

On a subsequent visit to her OB/GYN, Laura learned that her pregnancy carried a high risk of preclampsia, Additionally, because the baby was so small, she would most likely require an emergency C-section. “Now it wasn’t just about my baby, it was about me,” Laura said. “We now had to make a painful decision that could affect my health and our ability to have other children.”

One by one, her OB/GYN had laid bare the facts and health risks to her and to her child. Laura and Cole were under no illusions about the consequences of their decision. Yet, they never considered aborting their daughter.

Laura told Live Action News, “We felt strongly that if our daughter was going to die, that it would be in God’s timing and not by our hand.” They felt that deliberately taking her life was not honoring it, and they wanted to honor God’s plan for her life, “no matter how short.”

Once Laura confided to her doctor how she felt, the doctor affirmed the couple’s decision to choose life. She told Laura that would never pressure her to take a path not consistent with her moral beliefs. Laura said, “To this day, I adore her. I haven’t seen her in many years as she retired from her OB/GYN practice, but I consider her a dear and special person that was in my path at the time for a reason.”

As her pregnancy progressed, Laura felt as if she passed the days grieving and waiting. Up until this time, she felt lucky for all her blessings. Ironically, so many of her friends were also pregnant and it was a painful reminder that unlike them, she would not deliver a healthy, viable baby.

Still, she never felt closer to God. About a month after getting the diagnosis, she and Cole traveled to Nevada for a break. As a precautionary measure, her physician had provided written instructions for emergency room staff should she go into labor and miscarry. Exhausted mentally and physically, she gazed at the towering mountains stark against a clear, blue sky and a verse from Psalms immediately sprang to mind: “I look up to the hills. Where does my help come from? My help comes from the Lord…”

Laura read numerous books on infant loss during this time and drew support from her church community. She felt that when faced with a crisis, it’s essential to be diligent in choosing the right “guiding voices.” She and Cole consciously allowed their faith and Biblical worldview to navigate them through troubled waters. And she never gave up hope.

“I prayed for a miracle up until the night before Aubrey died,” Laura said. “I hoped and trusted God’s good will for us whatever it might be. When my final ultrasound revealed that our daughter’s circumstances were unchanged, I knew it was time to let go. My pastor advised us to ‘trust,’ then just ‘rest’. Regardless of what happened to Aubrey, we were going to follow God wholeheartedly.”

“I remember staring at her in total awe because she was so beautiful. Even the doctors were astounded at her development,” said Laura. The hospital gave us as much time with her as we needed. Cole and I just wept and held her and each other. And I was so grateful for the choice we made not to end my pregnancy because we would never have been able to hold her and celebrate her life if we had cut it short.”

Despite the heartache of losing her first child, Laura believed that God uses all circumstances ultimately for good. The doctors told Laura that triploidy is diagnosed in 1-2% of pregnancies and usually results in early miscarriages, but Laura believes God had other plans. “We are so limited in our understanding,” Laura said, remarking on how “even a short life like Aubrey’s” can have a lasting and powerful impact. “She changed me and she changed my husband. Even many years later, her story continues to change me and conform me to being more Christlike.”

Lauren continued, “I don’t look at things the same anymore. I have suffered small amounts compared to many, but now, I’m more compassionate and caring. Losing Aubrey made me more comfortable embracing others and caring for them when they go through a loss. I love the song, ‘Glory Baby’ by Watermark because it truly resonates. I’ve given copies to friends who have suffered miscarriages.”

Today, Laura and Cole see God’s blessings everywhere. They have three healthy sons, ages 12, 11 and 7. The boys know about their big sister in heaven. The Fleishours have taught them that Jesus offers eternal life and that one day, they will join their sister in a glorious place void of suffering and sorrow. Until then, the cherished pictures, handprints and footprints of baby Aubrey serves as a reminder that God offers peace and joy that transcends life’s difficulties.