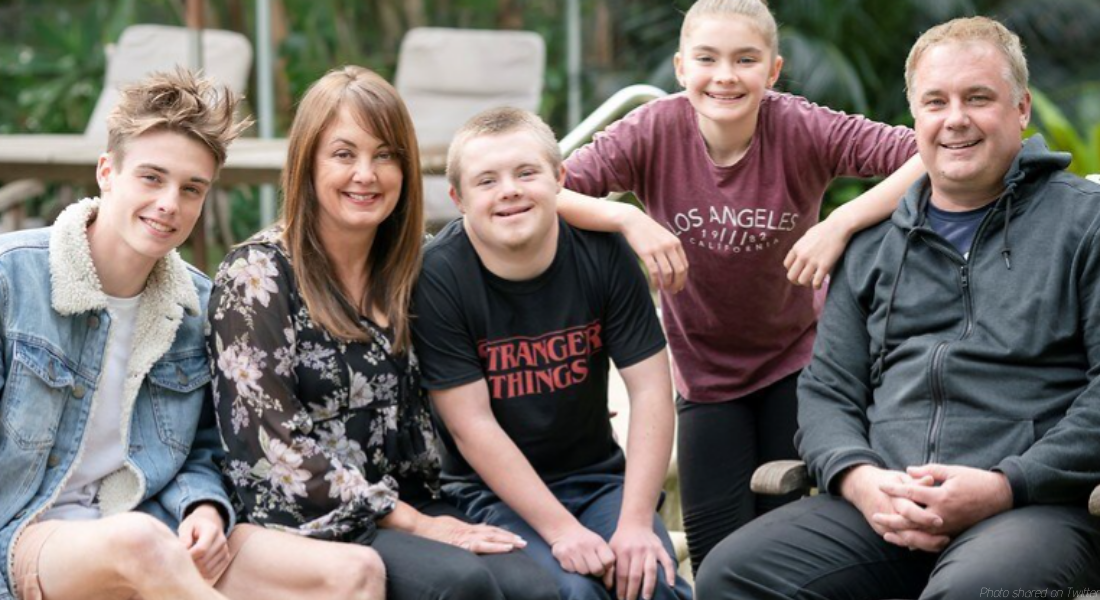 UPDATE 7/20/20: The decision to force a British family living in Australia for seven years to leave the country because they have a son with Down syndrome has been overturned. According to SBS News, the Administrative Appeals Tribunal’s decision likely means that the Lund family will be allowed to have permanent residency within a few months.

16-year-old Ciaran Lund has Down syndrome and his healthcare needs are estimated to cost at least $2 million to Australian taxpayers. Because of this, the family was originally denied permanent residency and told they had to leave Australia in 35 days.

The family’s migration agent and lawyer Aleksandra Rajcevic said, “They will likely get their permanent visa now because the tribunal has requested the decision be reviewed by the department and with new directions. It’s a win for the family. Ciaran meets the criteria for the granting of the visa.”

7/1/20: A family has been given 35 days to leave Australia after living there for years, solely because one of their children has Down syndrome.

Jason and Anita Lund moved from the United Kingdom to Sydney, Australia, on a temporary work visa when he got a job for the New South Wales government. The Lund family relocated in 2013, and everything was fine — until five years later when they applied for a permanent visa. That application was denied, solely because one of their children, Ciaran Lund, has Down syndrome. “I remember that day,” Anita told SBS News. “Our immigration lawyer told us we’d got 35 days to leave the country. We were absolutely devastated.”

“We expected some communication around being accepted into the country,” Jason added. “But deep down in our hearts, we didn’t think it would be an issue. It was quite difficult to take on board, we didn’t really understand the implications and we were scared.”

Yet another family being told they have to leave the country bec one of their children is disabled.

The cruelty of this govt is beyond measure.https://t.co/U8EUZhRDfz

The Lunds filed an appeal, and 18 months later, they are still waiting for their case to be heard. But the Australian government, as of now, has said that the entire family cannot stay, because Ciaran’s health care costs would be too high. The government said Ciaran would cost Australian taxpayers over $2 million, reducing a human being to nothing more than a cost/benefit analysis. Yet to the Lund family, Ciaran is so much more than that. The 16-year-old loves dancing, Freddie Mercury, movies, and the beach. “He’s just like any other typical teenager; he just wants to hang out with his mates,” Anita said, explaining that his intellectual disability “…doesn’t mean he doesn’t have the capacity to learn, it just means he’s slower.”

Aleksandra Rajcevic, the family’s lawyer and migration agent, explained to SBS News how this was able to happen. “It falls under something called the Public Interest Criterion 4007,” she said. “It is designed to protect, if you will, the Australian community from any dangers to public health or any prejudice to access. So if a child is assessed as being a heavy cost on the system, the entire family fails. It’s a ‘one fails, all fail’ policy.” Though the Lunds and Rajcevic both say Ciaran is self-sufficient, the government considers the possibility of things like residential care, disability services, special education, and more — not because they are things Ciaran is expected to need but based on the needs of a hypothetical person with Down syndrome.

Anita calls this kind of discrimination Australia’s “biggest secret,” and it should come as no surprise that  that it isn’t heavily advertised that people with disabilities are essentially unwelcome there. “When I speak to anyone who lives in Australia, including our 90-year-old neighbours next door, they’re just absolutely gobsmacked that this kind of thing is allowed to go on,” she said. According to Dr. Ellen Skladzien, the CEO of Down Syndrome Australia, this is able to continue because Australia’s migration laws have been made exempt from the country’s Disability Discrimination Act (1992), making discrimination on the basis of disability completely legal. “Even if there’s a positive outcome at the end [of a visa battle], what we need to do is change the rule so that people with disability aren’t being discriminated against right now,” Skladzien said.

READ: Woman with Down syndrome makes history with college graduation

In their experience, the Lund family says Ciaran has been reduced to nothing more than a number on a spreadsheet. “We’ve jumped through hoops to help Ciaran settle here, he’s got a glowing report from his pediatrician, and from school, and he’s done work experience to prove he can join the workforce,” Anita said. “Throughout this entire process, no one has ever even met Ciaran… he’s just a number, basically.”

Another family recently went public about a similar ordeal, with the government telling them they had to leave because their son had been diagnosed with cystic fibrosis. The couple had been living in Australia for a decade, and their son, Darragh, had been born there, but that didn’t matter; they were given 28 days to leave because Darragh would be too “expensive.” Ultimately, they were allowed to stay, but only after appealing the original decision.