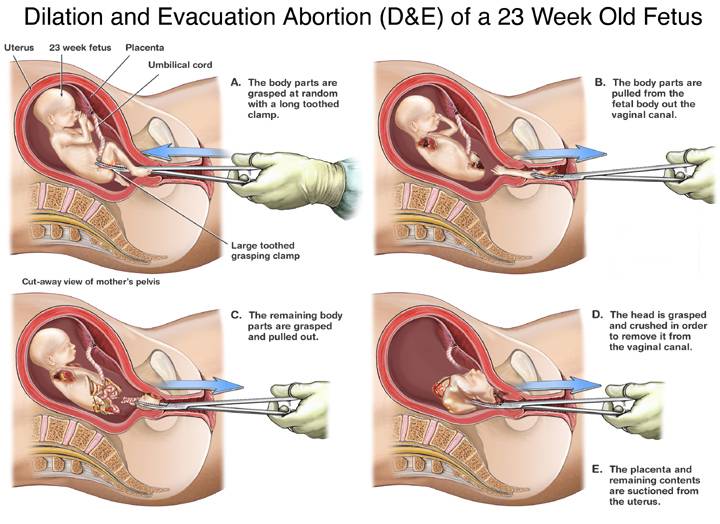 Some pro-life groups have been focusing efforts on banning a late-term abortion procedure called the D&E (Dilation and Evacuation) abortion. In this type of abortion procedure, the abortionist reaches into the womb with a pair of forceps and pulls out the preborn baby piece by piece, dismembering the child. The baby is torn apart, and after the limbs, organs, and torso have been extracted, the head is crushed and removed.

Pro-abortion groups have objected to the term “dismemberment” to describe these abortions. The term is accurate, as those who have performed or witnessed them can attest to.

Before the actual killing and removal of the baby, the woman’s cervix (the bottom opening of the womb) must be slowly dilated with sticks called laminaria. A day or two before the actual abortion, the doctor inserts these laminaria sticks into a woman’s body where they absorb fluid and slowly expand, opening the cervix enough to perform the abortion. So a dismemberment abortion is actually a two or three day process.

Author Peter Korn wrote a book called Lovejoy: A Year in the Life of an Abortion Clinic about an abortion facility ironically named Lovejoy.  The book deals with both the inner workings of the clinic and the protesters outside. Korn interviewed workers and witnessed several abortions, two of which he describes in detail in the book. Lovejoy SurgiCenter, which still performs abortions in the first and second trimesters of pregnancy, is located in Oregon. You can see their website advertising abortions up to 24 weeks here.

In the passage below, Korn describes how a new clinic worker, Anneke, witnesses her first dismemberment abortion. An abortionist identified as Dr. Lane is doing the procedure: 20 weeks. Age of some victims of dismemberment abortions

Still holding the forceps, Lane begins pulling, tearing apart the fetus. His first three tugs yield indistinguishable tissue. The fourth brings out more solid mass, which Anneke, from her position in the back of the small room, immediately recognizes as the trunk of a fetus…. Tiny hands and feet, extracted next, are the most recognizable. The head is less so. The pieces of the fetus and the placenta are placed by Lane on a surgical tray at his side.

A quick look at Lovejoy’s website verifies that they still perform these abortions. They are still dismembering babies in the second trimester, but their description of this dismemberment is very different from what you have just read. According to Lovejoy’s website, this is what a woman coming in for second trimester abortion needs to know. I’m quoting their message to abortion- minded women in its entirety:

Pregnancies in the later part of the second trimester require more dilation for a safe procedure.

Between 20 and 24 weeks, the entire process takes 3 consecutive days to safely and slowly dilate the cervix.  In this situation, the first day consists of ultrasound, counseling and lab work.  There is an exam with the doctor, during which cervical dilators called laminaria are inserted into the cervical opening.  How many depends on gestation.

There are no medications for this process.  It usually takes about 2-5 minutes and may cause mild menstrual-style cramping during insertion.

Each patient is then sent home with a prescription for narcotic pain medication and information regarding her appointment the following day, when the first set of laminaria are removed and a second set are inserted for further dilation.

Although we don’t know what women are told in the facility by staff, it seems clear that on their website, at least, Lovejoy sugarcoats late-term abortions and sanitizes them in an attempt to advertise these abortions to women. In his book, Korn describes facility workers subtly pressuring women to go through with their abortions and being less than honest with them about fetal development. One patient, named Peggy by the author, had some questions to ask the clinic counselor:

Peggy’s (the patient’s) mind is off on a different track. “Is it true that at six weeks it has a heartbeat?” Carye (the counselor) says nobody is sure exactly when the heart begins beating, and tries to deflect that concern. “This pregnancy and you are the same thing,” she adds, explaining to Peggy that prior to twenty-four weeks the fetus cannot survive outside her womb.

The pregnancy and the woman are the same thing? Obviously then, a woman in her 24th week has four hands, four arms, four legs, two hearts, etc. In addition, medical science proves that a baby’s heart begins beating at or around day 21 .

Clearly there is some major dishonesty and manipulation of the facts going on here.

Facility workers hide the truth because fewer women might choose abortions if they knew their baby was going to be dismembered. Pro-abortion activists hide the truth because fewer people would support abortion if they knew. Despite the efforts of clinic workers and abortion activists to mask reality, evidence of the brutal dismemberment of preborn children cannot be denied.