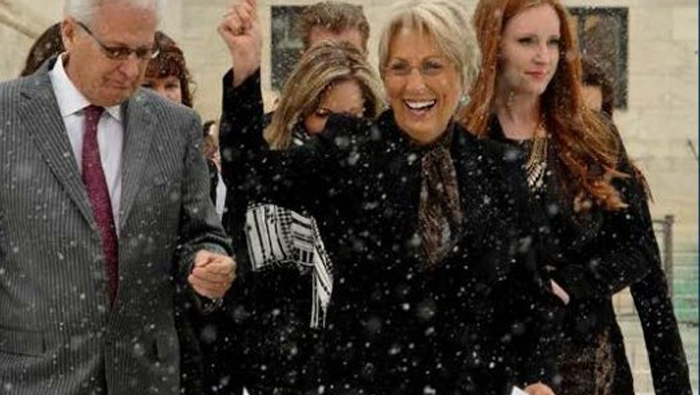 You may not know her name, but you certainly know her impact. She’s the face of Hobby Lobby, the face of the successful fight for religious freedom. Barbara Green received the Becket Fund for Religious Liberty’s Canterbury Medal for her “courageous defense of religious liberty during Burwell v. Hobby Lobby,” the organization said. Her work will surely pave the way for others to stand up for their conscience rights.

Joining such honorees as Nobel laureate Elie Wiesel and Prison Fellowship Founder, the late Charles Colson, Green was honored at the organization’s dinner this past week. The Becket Fund says, “The Canterbury Medal recognizes courage in the defense of religious liberty and is given annually to a leading figure who champions a robust role for religion in society.”

In her speech, Green detailed the decision to sue the government in order to fight for Hobby Lobby’s right to not pay for abortifacient birth control, as mandated by the government. She said:

“To do something because it is the right thing to do–does not make it easy. But when you have Him in your life, you can do a lot more than you think you can. It’s only human nature to see if there is a less dramatic way to solve the problem. We tried to discuss our options. There were just no options on the table. We couldn’t take life. We  ALL believe that life begins at conception.”

“Barbara Green is a true example of the power of one person, of one family, in the cause of religious liberty. Advocates of religious freedom can take heart from what  the Green family has accomplished on our behalf.”

Indeed, a nation of pro-life business owners may not have known her name either, but they are thankful for Green and her family for the courage to fight for the religious liberty of all of them.