Yet these quotes are quite different from what many might expect. They are anything but simple quips. Instead, they provide a direct line to truth from inside the abortion industry. Fr. Frank Pavone writes (emphasis mine):

Here, each day, we will post one item that exposes abortion – usually a quote from the abortion industry, from one of our former abortion providers (known as Centurions), or from someone harmed by abortion, such as the many women and men of our Silent No More Awareness Campaign. You will be astonished. Use these quotes to enlighten others about what abortion really is.

Incidentally, for those who wonder why former abortion providers are sometimes “known as Centurions,” here is an explanation from the Society of Centurions’ brochure:

The Centurion who stood at the foot of the cross of Christ suddenly became horrified at the crucifixion he was ordered to carry out. When Christ died, this Centurion dropped his sword and fell to his knees exclaiming, ‘Surely, this was an innocent man!’

Those of us who have participated in the killing of unborn children are the Centurions of today. We have dropped our swords against the unborn child. Now we must recognize the depth of our guilt and deal with the ramifications…To revitalize our humanity we need to forgive and be forgiven, to reconcile and be healed.

Thankfully, many of these “Centurions” are speaking out – along with others who have been harmed by the abortion industry. They, better than anyone else, know what abortion truly is and how it harms innocent children, women, men, and entire families. They, better than anyone else, know how cruel and inhuman abortion is, despite the ambiguous words often used to cover the truth. 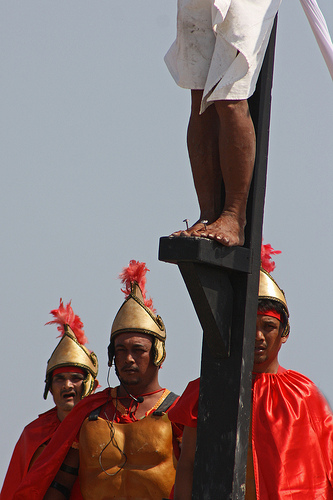 Centurions at the foot of Jesus’s cross. (Photo credit: istolethetv on Flickr)

The Expose Abortion project also includes quotes concerning women who have suffered botched abortions and from those who have interviewed abortion clinic workers. You can follow @ExposeAbortion on Twitter or catch the daily quotes on Facebook.

Here are a few of the quotes shared so far. Spread them far and wide, and encourage the people in your circle of influence to follow the Expose Abortion project. While these truths are hard to read and even harder to understand, it is something we must do. Responsible citizens do not turn the other way when an uncomfortable cruelty is brought to their attention. They learn the truth and take appropriate action.

I was helping the doctor hold the baby [to keep it in the birth canal]. The other nurse got the instrument [a large syringe with a large needle], handed it to the doctor, and he inserted it into the base of the skull. Then he pulled the baby out. Its little hands were grasping. When the baby quit grasping, then he delivered it. He used the syringe to suction out the brains.

– Testimony of witness to an abortion. See Silentnomoreawareness.org/testimonies/testimony.aspx?ID=2671

It [abortion] goes against all things which are natural. It’s a termination of a life, however you look at it.

– Robert Harris, abortionist, From author Magda Denes, PhD. “In Necessity and Sorrow: Life and Death Inside an Abortion Hospital”.

And typically when the abortion procedure is started we typically know that the fetus is still alive because either we can feel it move as we’re making our initial grasps or if we’re using some ultrasound visualization when we actually see a heartbeat as we’re starting the procedure.

You can see a miniature person… as a physician… I am destroying life.

Question: Can the heart of a fetus or embryo still be beating during a suction curettage abortion as the fetus or embryo comes down the cannula?
Answer: For a few seconds to a minute, yes.

– Sworn testimony given in US District Court for the Western District of Wisconsin (Madison, WI, May 27, 1999, Case No. 98-C-0305-S), by Dr. Harlan Raymond Giles, an abortionist. He describes legal activity.

I was finally able to remove the head and look squarely into the face of a human being…a human I had just killed.

I have taken the lives of innocent babies and I have ripped them from their mother’s wombs with a powerful suction machine.