Currently, the only facility in Missouri offering abortion is Planned Parenthood of the St. Louis Region, which has sent at least 68 women to the hospital from its location since 2009. But Planned Parenthood of the St. Louis Region and Southwest Missouri has long had plans to expand medication abortion to two other Planned Parenthood centers — one in Joplin and one in Springfield. Those plans were put on hold after the Springfield center’s license was denied and “the Joplin center’s application is still pending and is now in doubt for approval,” according to pro-life group Operation Rescue, which adds that the Springfield Planned Parenthood’s license was denied three times due to “numerous violations of licensing regulations” for which the abortion center never submitted a proposed correction plan.

Live Action News’ Cassy Fiano reported in December of 2017 that Missouri’s law mandates that medication abortion facilities have OBGYNs (with admitting privileges) on call in case of complications:

At the Springfield News-Leader, Will Schmitt writes, “The complication-plan regulation requires abortion providers to have a physician on standby at all times. This is alarming to Planned Parenthood, due in part to its price tag.”

Planned Parenthood of St. Louis just can’t be considered safe, and as the Joplin and Springfield centers operate under the same umbrella, it is reasonable to assume that these centers would be unsafe for women as well.

But beyond the unfortunate reality of unsafe abortion centers is the fact that medication abortion itself — the abortion pill regimen — just isn’t safe for women. Operation Rescue notes that the “rate of incomplete abortion requiring surgery [is] up to eight percent.” Beyond that, there are many possible complications. Women have been misled, told to expect symptoms resembling a heavy period, but instead have experienced things like excessive bleeding and extreme pain — and some, like Holly Patterson, have died from sepsis.

Former abortionist Dr. Anthony Levatino explains the procedure and the risks to women in the video below, found at AbortionProcedures.com:

An eight percent failure rate means that about one in every 12 chemical abortion attempts will be unsuccessful, which means women will need to be subjected to a surgical abortion, which, of course, also has its own risks. Former North Carolina Planned Parenthood manager Crystal Eldridge told Live Action News that in her center, there was an extremely high chemical abortion failure rate. Eldridge said:

… [T]hose women “came back to get aspirated because a lot of times it just didn’t work, and they would bleed out some clumps and have a lot of leftover POC in their uterus and have to have it sucked out because they were going septic or needed an emergency D&C at the hospital across the street.”

“Out of every ten medication abortions,” Crystal said, “probably six” had to come back for a surgical abortion.” …

While this is clearly much higher than an eight percent failure rate, it shows that abortion, no matter the method, puts women at risk — even when a woman gets an abortion from industry leader Planned Parenthood.

Taking the abortion pill regimen isn’t just a simple thing — if a woman is too far along or if her pregnancy is ectopic, these factors put women at additional risk. And abortion providers for years were prescribing the abortion pill for pregnancies beyond seven weeks, against FDA regulations at the time, putting profit over women’s health and safety. The FDA recently expanded the regulations for the pill up to 10 weeks — a move some have suggested also puts women’s wellbeing below that of the abortion industry’s business. Life News reported in 2016: 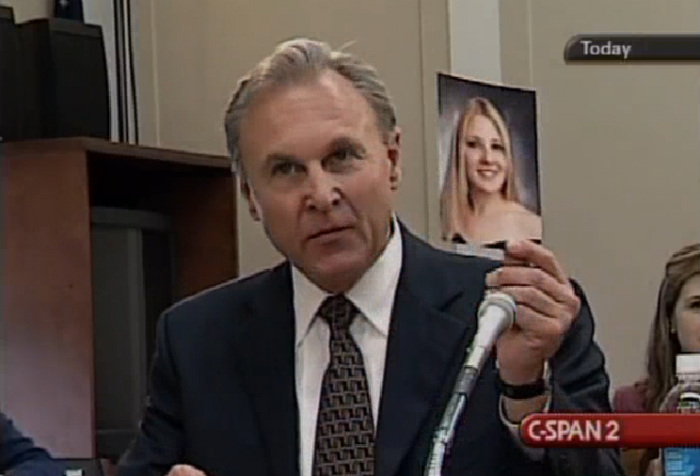 Monty Patterson shows a house panel a photo of his daughter Holly, who died from sepsis after taking the abortion pill.

Even with legal, widely available abortion, women are still being injured and even dying, not just from surgical abortion but from the abortion pill. Life News added:

The FDA, with no fanfare, released its April 2011 report showing 14 women in the United States alone have died from using the mifepristone abortion drug and 2,207 women have been injured by it.

Of the women experiencing medical and physical problems resulting from the abortion drug, 612 women required hospitalizations, 339 experienced blood loss significant enough to require a transfusion, 256 experienced infections and 48 women experienced what the FDA labeled as “severe infections.” Given that the RU 486 abortion drug caused sepsis, a potentially lethal infection that resulted in the deaths of women from around the world, the “serious infections” were very likely life-threatening situations.

As the death total of 14 has not been updated in recent years, and as the FDA has increased the gestational age for the use of the abortion pill, it is very likely that deaths and complications have increased, not only in the U.S., but worldwide.

Editor’s Note: Visit AbortionPillReversal.com if you have taken the first pill for a chemical abortion and have changed your mind.