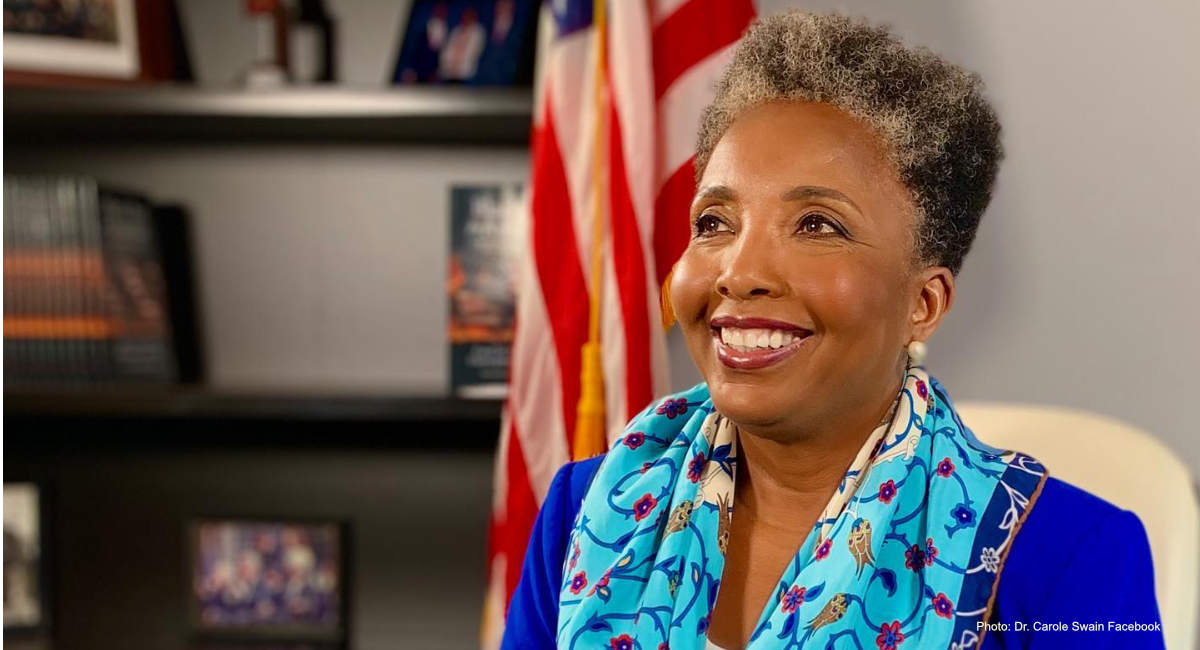 Dr. Carol Swain is an award-winning political scientist, a formerly tenured professor at Princeton University and Vanderbilt University, and the author of 11 books. Additionally, she is a Distinguished Senior Fellow for Constitutional Studies at the Texas Public Policy Foundation, and an educational advisor for the American Cornerstone Institute, which was founded by Dr. Ben Carson. She has earned five degrees, including a Ph.D., and by all accounts has had an impressive and illustrious career.

But to get there, she had much to overcome. She suffered severe poverty, dropped out of high school, became a teenage mother, and had an abortion. But through it all, Dr. Swain never stopped striving to improve, and decades later, realized that redemption for her past was possible, too.

Swain was born in Bedford, Virginia, the second of 12 children. In addition to living in poverty, Swain grew up seeing her father abuse her mother. “My family was the poorest of the poor,” she said in an interview with Live Action News. “For the early part of my life, I lived in a two-room shack with no indoor plumbing, and in the wintertime, there was inadequate time to go to school. If it snowed, we stayed home. There were no toiletries, no deodorant, no sanitary napkins, nothing like that. We had to heat water in a pot on the stove to bathe in. And it was just… a really bad existence.”

Because of this, Dr. Swain endured a great deal of bullying. “I was teased a lot as a child; they talked about bullying and shaming, and when you’re poor like that, you get a lot of shaming for things like that — not having sanitary napkins, using rags, things leak,” she said. “But through it all, I knew I was different. I always had a sense of urgency of something I was supposed to do.”

After eighth grade, Swain dropped out of school. But there were still people who told her she would amount to something special one day. “I believe it was God sending them to encourage me,” she said. “I suffered from depression, suicidal gestures, I would take bottles of aspirin. I should be dead. But God had a plan for my life, and I had no idea I would go to college.”

By the age of 21, Swain had given birth to three children; in 1975, her infant daughter died of sudden infant death syndrome, and she was grappling with an abusive and loveless marriage. “That year was a turning point year for me, because I earned my high school diploma,” she said. “I took several jobs outside the home, I filed for divorce, and the next year, I started college. And that set in motion a changed life.”

Education as the path to success

“I wanted to be able to support myself without a man’s income,” she explained. “When I went to community college, my first degree was in business. I just wanted a job. And I thought I would manage a store. I imagined being a store manager in one of the little shops in the mall. After I graduated, I applied for jobs and was told I needed a four-year degree. And I went through the college catalogue, just looking for the field that required the least amount of math — because that business degree required a lot of math, and math was the field I was weakest in. So I chose criminal justice. I graduated magna cum laude from Roanoke College in Salem, Virginia while working 40 hours a week, nights and weekends, at the community college library where I got my first degree.”

But along the way to making a better life for herself and her family, Swain had an abortion.

“My abortion was gotten shortly after abortion became legal in the United States,” she said. “I was in my early 20s, and it never occurred to me at the time — I was naïve enough to believe that if the government allowed something, that it must be okay. At that young age, I was married and working, and it was done out of convenience. It was easy, but I can tell you that as soon as it was over, I immediately was ripped with regret.

Afterwards, Swain immediately got pregnant again. “That time [it was] on purpose; it was almost like I was trying to replace the baby who had been aborted,” she said. “And I miscarried that pregnancy, and I remember just having grief over that loss. And I was never able to have another child.”

In addition to losing her next child, Swain said the abortion likely led to the break-up of her marriage with her second husband.

For 20 years, Swain kept the abortion a secret, until she was approached by producers from a reality show looking to follow people considering running for president. One of the things they asked for was to share a secret no one else knew.

“I shared on that form about my abortion, and said that as a consequence, I would be running as a pro-life candidate,” she said. “Once I put it on that form and turned it in for these producers, it enabled me. Next I called my children, my two sons, and told them about it. I was not ready to go public, so I waited. And maybe a year or two after that, there was a legislation in the Tennessee state house about informed consent, three-day waiting periods, and I wrote an opinion piece supporting that legislation, and I used my personal story. And that freed me.”

She also eventually found that by turning to God, she was able to be forgiven of her sins — and therefore, was able to let her past go.

“I believe as a Christian, the blood of Christ covers all of our past, present, and future sins,” she said. “So when I had that Christian conversion experience and I confessed my sins, then I was cleansed of that sin. The abortion was like any other sin. When I see women, especially Christian women, mourning and in deep regret, holding themselves hostage over something that happened years ago, I would like to see those women liberated. I’d like to see them walk in the fullness Christ has for them.”

Church, the abortion industry, and the pro-life movement

Swain agrees that the abortion industry frequently targets women from poor and minority communities for abortion and sterilization.

“They would justify sterilization, which was common in Virginia, where I was growing up in the 70s,” she said. “I had cousins that got pregnant; they had one child, and when they went into the hospital, the doctors talked them into signing papers to be sterilized. And through the eugenics movement, some people who were handicapped and who were minorities, they got their tubes tied and were persuaded to do that. The left has always felt that you needed to cull the population. With Blacks, they can justify it because of the crime rate and the rates of self-dysfunction. And there are people who will talk very honestly about that being a concern. Then I have friends in academia who are progressives, and they will talk about people who are poor [and] can’t take care of a child, so they need an abortion.”

Yet the blame cannot be placed solely on the abortion industry, Swain argues. She believes America’s religious communities need to do a better job of instilling pro-life values, especially in Black communities.

Swain also argued that the phrase “post-abortive” does more harm to both men and women who have had abortions. Instead, they deserve compassion and care — and the willingness to let go of their pain.

“We need to get rid of that expression, ‘post-abortive’. Because it’s a label people carry around that I don’t believe, in Christ, that it’s applicable,” she explained. “… I think we’re supposed to be new creatures in Christ, and they should allow the forgiveness of God to set them free.”