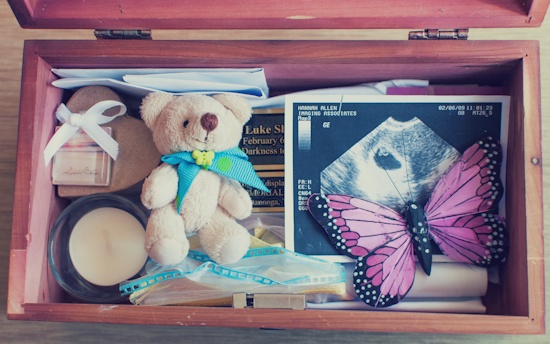 For nearly three years after I had an abortion at 6 weeks gestation in February 2009, I had a strong desire to return to the abortion clinic to obtain my records. I hoped to find out something, anything, I could about my first baby, though I honestly don’t know what I thought I would find. I just knew I needed to go. At times, it felt as if my child didn’t really exist because I had nothing tangible declaring he did.

I went to Planned Parenthood on a sunny December afternoon in 2011 to request my records along with any ultrasound photos they might have. A friend of mine told me they usually purposefully leave out any ultrasound photos unless they are specifically requested. Shaking and nervous, I prayed for courage and the right words to say as I waited in anticipation of photos. I watched as the woman behind the counter went over to the copy machine. The woman who had counseled me, before the abortion, arrived in the parking lot just after I did and came into the room just as I asked if I could have the original. I see that as God’s perfect timing because I almost went on a different day, at a different time.

The counselor told me they are required to keep the original photo on file for ten years. When I asked if I could have it before they got rid of it, she informed me that nobody else had ever asked her that, and that she’d have to look into it for me. Appearing alarmed, she asked why I wanted the photo, while offering for someone to talk to me about it. I explained to her that God has healed me, but that having my ultrasound photo is important for me to honor my baby’s valuable life through healthy recognition and grieving. Taking this to be an open door to briefly share my pro-life testimony, I told of having an abortion and almost having a second abortion. I then told of my choice to embrace my daughter’s precious LIFE instead and subsequently finding healing in Christ. I was sharing all this with the very woman who had counseled me before having the abortion.

I remember her telling me, before I took the RU486 pill, that some initial sadness after an abortion would be normal, but if I was still feeling sad after a couple of days, that would not be normal and I should seek help. Almost three years after the abortion, I was there to tell her I wasn’t “over” ending the life of my child, but that God has restored and redeemed my heart. I was there to make known that my child’s life mattered and that I was acknowledging his existence. I believe she was meant to be there to talk to me that day so I could give her a glimpse into the life of a post-abortive woman who regrets her “choice.”

How exceedingly difficult it was to walk back into that Planned Parenthood after the elapsed three years. I was terrified of facing the place filled with profoundly painful memories from the darkest period of my life. However, I knew that God was with me and would hold my hand as I faced my fear. I knew I was meant to go there. And because I did, I was given an even greater measure of peace and healing.

Even though I am content to have a copy of my ultrasound photo for now, I hope to one day have the original. My intention in writing this is to encourage other post-abortive women to contact the abortion clinics where they went and retrieve their records. Ask the clinics for any ultrasound photos they might have. Even if you don’t feel ready to look at/read everything yet, get whatever is available so you will have it to view when you are ready. Some places only hold records on file for a certain number of years. It can help bring closure to look through your records. I am thankful to have discovered my first child had a due date of October 1st.

You can keep up with my pro-life ministry here: www.facebook.com/HannahRoseAllen