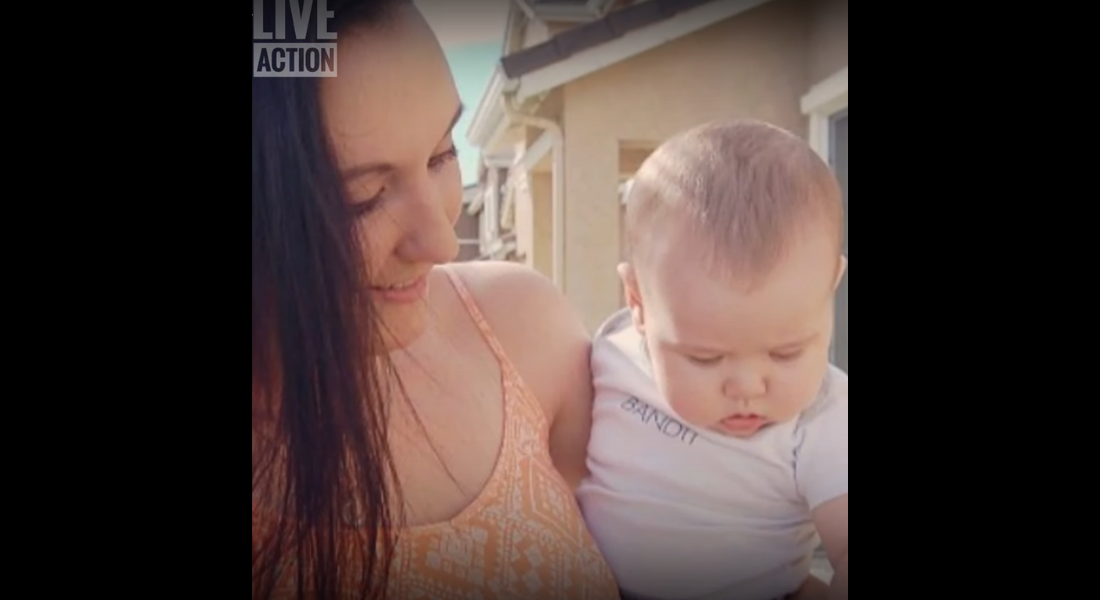 At 17, while still in high school, Emily realized she was pregnant. “I told my boyfriend at the time, but he told me the only choice is abortion,” she said in a video for Live Action, explaining that she considered the different scenarios. Because she didn’t want to tell her parents she was even sexually active, Emily said she “went down to Planned Parenthood, and they pretty much brought me to see a counselor for a few minutes, but the counselor didn’t show, like, models of a baby and the age, or what they look like at that stage of pregnancy.”

Emily explained that the staff at Planned Parenthood didn’t discuss options with her, or attempt to alleviate any factors leading her to think abortion was her only choice.

“It was just like, ‘OK, you’re pregnant, what do you want to do? Your parents don’t know? Oh, right, abortion’s the right answer, ok,'” she recalled. “So they give you the pills for it. The first half of the pills you have to take in front of them, and then you go home and you take the other ones, like, 24 hours later. So I took the second pill at home.” Having to go through an abortion at home, by herself and in secret, was devastating.

“I bled a lot. I saw, like, a lot of stuff coming out, and like — it was traumatizing,” Emily said. “Looking back on it, I can’t believe that I did that. I can’t believe I put my body through that, or I risked all those things…. you know, I miss that person that I didn’t keep.”

Despite claims from the abortion industry that the abortion pill regimen is “safer than Tylenol,” there are numerous risks. According to at least one study, an estimated five to seven percent of women will need follow-up surgery, in addition to other potential side effects. Less serious side effects include cramping, nausea, diarrhea, and abdominal pain, but life-threatening complications are known to happen also, such as uterine hemorrhaging, viral infections, sepsis, vaginitis, and even death.

In Emily’s case, she went through all of this alone, with no support, and without her parents’ knowledge or consent.

Two years later, Emily found herself in the same situation.

“I was 19 this time, and I got pregnant, and I already knew what to do about the abortion,” she said. Initially, her plan was to keep her baby, but her boyfriend “was not supportive whatsoever at all.” Again, still too afraid to tell her parents, she said she “was ashamed that it happened to me again… I went back to Planned Parenthood.”

But during her second experience, Emily felt differently, and wasn’t afraid to speak up. “I even told [the counselor]… ‘I don’t know if I want to do this.’ … I was staring at the cup and the pills in my hand, and I said, ‘I don’t want to do this,'” she recalled. “She didn’t help me at all… [s]he was just like, ‘Well, you already paid for them, they’re here,’ basically take them, and so I did.”

On her way home, Emily was instantly wracked with grief and regret, crying and trying to think of a way to undo what she had done. And then something came to her. “[T]his idea just came into my head about abortion pill reversal, which I’ve never heard of before, so I kind of know God put that idea in my head,” she said. “I was thinking about, ‘If I throw them up, like, will that work? Have they been dissolved yet?'”

The abortion pill procedure works in two parts. The first pill, mifepristone, blocks progesterone from reaching the baby, essentially starving him and cutting off his nourishment. This causes the baby to die in the womb. The second pill, misoprostol, is taken 24 to 48 hours later and induces contractions, forcing the mother to expel the body of her dead child from her uterus.

Emily ended up contacting an abortion pill reversal hotline and was set up with a clinic who could help with the process, within 12 hours from the time she took the first pill.

“… [T]hey were the sweetest people. They were so different from the people at Planned Parenthood,” she said. “They were welcoming and loving.” They showed her models of what her baby looked like, and promised to help her through her pregnancy. “They said, ‘Don’t worry about your parents, we’ll tell them with you,” Emily recalled. “We’ll be with you every step of the way. We’ll get you a crib, we’ll — whatever you need.'” And they kept their word.

The process of the abortion reversal involved close supervision from her doctor over the course of the first trimester. Emily’s son was born July of the next year, and she named him Ezekiel. “I chose that name because the whole pregnancy, I was praying and begging Him, ‘Please just let my baby be healthy. I pray that the effects of the pill don’t do anything to him. Please just let him be healthy,'” she said. “And he is, and he’s perfect in every way.”

As someone who has experienced both choices, Emily didn’t mince words about the effect both had on her.

“Having the reversal was the best decision of my life. Having an abortion was the absolute worst decision,” she said. “… The trials of telling your parents, or boyfriend trouble, you know, all that stuff is just in the moment. But long term, choosing life was the absolute best choice I’ve ever made.”