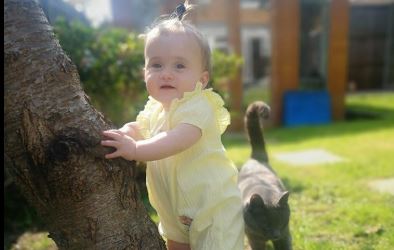 Last year, Elouise Simpson was one of the first people in the United Kingdom to ever undergo surgery for spina bifida in the womb after she was diagnosed prenatally. Now she is celebrating her first birthday.

Elouise’s parents had first learned their daughter had spina bifida during their 20-week ultrasound. Doctors recommended abortion, but mom Bethan Simpson said she simply “couldn’t justify terminating a child I could feel kicking.” She and her husband Kieron learned about a surgical option from another hospital and decided on the prenatal surgery, which was still new in the United Kingdom and had only been performed successfully a few times. Bethan Simpson underwent the surgery at 25 weeks and Elouise was later born “kicking and screaming – and peeing all over the place – so she ticked all the boxes.” Today, she continues to do well.

“She’s doing amazingly well,” Bethan Simpson told Live Action News. “She remains intervention free at 1 year. She’s starting to take steps on her own, walks around furniture and holding on well. Meeting all her little milestones that they once said would be unlikely.”

On her Facebook page, Bethan Simpson shared a video of Elouise taking steps, something that had been presented in the past as practically impossible when a child was diagnosed with spina bifida. Recently, a study revealed that prenatal surgery to correct the condition actually restores normal brain function. The study focused on three babies who had been diagnosed with the most common and most serious form of spina bifida – myelomeningocele. Researchers found that prenatal surgery is much more effective than surgery performed after birth.

“Elouise was deemed to be advanced in her communication skills, relationships, and emotional development,” her mother wrote on Facebook after Elouise’s one year check up done virtually amid the COVID-19 pandemic. “She’s still on time milestones wise with her fine motor skills and gross motor skills. We remain concern free for her overall health and development in general. She’s continuing to defy the odds.”

Thanks to this pioneering surgery, babies like Elouise are more likely to be spared from discriminatory eugenic abortions and be free to live their lives.