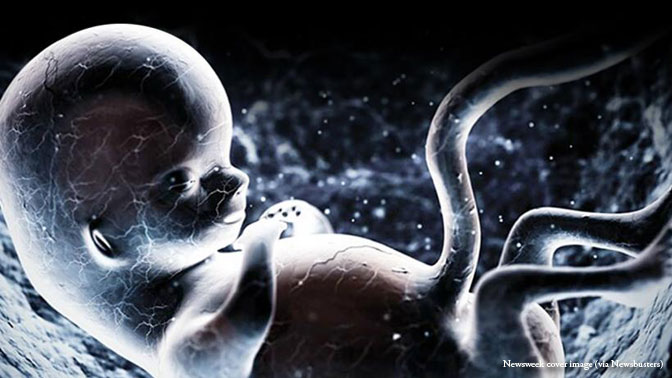 (Newsbusters) One women’s magazine is hyperventilating over the fact that an image of a fetus actually looks like… a baby.

Writing for Elle magazine, Sady Doyle recently criticized a Newsweek December cover in a piece titled “Why Does Newsweek’s ‘Abortion Wars’ Cover Show a Cartoon Fetus Instead of a Woman?” Doyle commended the magazine for tackling abortion in its new cover story – but bashed the cover illustration for showing a fetus that looked “more like a baby” than an “actual pregnancy.” Puzzled yet?

In a rant, Doyle described what made her “flabbergasted” by the cover: the fact that the image showed a “well-developed, relatively late-term fetus” with “no sign” of the woman in whose “uterus it is presumably housed.”

Guessing that the fetus was between twelve and fourteen weeks old, Doyle criticized the picture for making the age “hard to tell.”

“[I]t looks about five times bigger than the translucent, two-inch-long fetuses you normally find at that stage,” she wrote, “this image looks less like an actual pregnancy, and more like an adorable computer-generated alien.”

Doyle had a problem with the idea that abortion would destroy anything cute – or anything resembling a baby.

With the word “abortion” placed next to the fetus image, she complained, “we can assume it’s not going to be around for long.”

Because of this, the cover “sums up what’s wrong with how we talk about abortion” or “Everything is about the fetus, which is humanized, and the actual pregnant person is erased.”

(Has she read the news lately? Or ever?)

That led Doyle to warn about the “long history of fetal images being used to scare people and rile up anti-abortion sentiment” which has “entered the mainstream of conservative politics.”

Furthermore, Doyle protested, the cover was “misleading” because it wasn’t “exactly representative.” Most abortions happen before twelve weeks, or, in her words, “the embryo being removed is less ‘futuristic Gerber baby,’ more ‘lentil-sized clump of cells.’”

Plus, she added, if a fetus is aborted after twelve weeks, the “pregnancy is in many cases not healthy” with issues such as birth defects.

“So even in cases where a fetus was carried long enough to look very human,” she pushed, “it probably wouldn’t look like a healthy, happy baby.”

In the end (as in the beginning), she decided the fetus was “beside the point.”

What mattered, she insisted, was a “decision made by one person,” whether by a woman or a non-binary person or a transgender man (yes, she went there).

“By focusing exclusively on fetuses, and promoting the imagery of endangered, persecuted ‘babies’ in the womb,” she wrote, “people who oppose abortion are able to totally avoid talking about the ways in which their positions endanger and persecute the actual people carrying those fetuses around.”

According to Doyle, Newsweek ignored the victims of abortion with the fetus image alongside the words “abortion wars”:

It ignores Robert Lewis Dear’s victims, murdered abortion doctors, and rape victims forced to carry their rapists’ children to term. It erases poor women forced to have children they can’t afford, and people who aren’t able to pursue educations because they had children too early. It leaves out any person who wants to control their own body, but can’t, because of abortion restrictions. Put ‘abortion wars’ next to their faces, and you get a whole different message – one that’s much closer to the truth.

A “truth” that would censor the 57 million American babies lost since legalized abortion, that is.

Editor’s Note: This article was originally published at Newsbusters on December 22, 2015, and is reprinted here with permission.