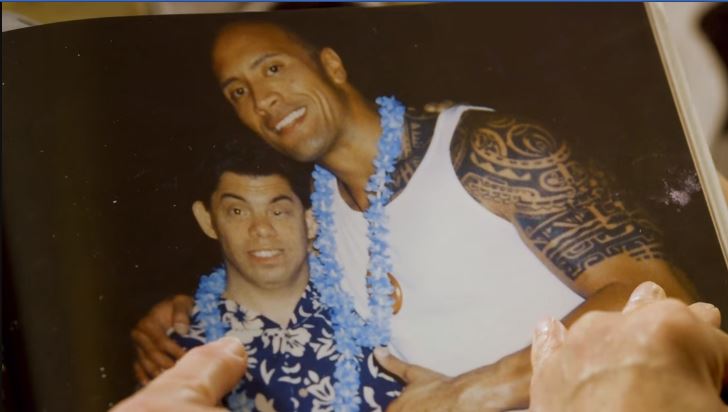 As part of a series on the 50 Game Changers to celebrate the 50th anniversary of the Special Olympics, Dwayne “The Rock” Johnson tells the story of how he began lifting weights. It all started with his friend Milton McBride Rosen, who has Down syndrome, and whom he met when he was about six years old.

Johnson shared a video from ESPN with his fans on Instagram this month, calling it a “special story” about a “lifelong friend” and “brother.” “If there’s one person who’s my hero, one person from the time I was six years old. When we first met we hugged and we became like brothers. And he has not only inspired me but inspired so many people,” Johnson said of McBride Rosen. “So I guess in a phrase, he’s “The Rock’s Rock.”

A special short film from @ESPN, @SevenBucksDS, @RocknRobinTV that tells the story of my lifelong friend, hero and @SpecialOlympics athlete — Milton McBride Rosen.

The video features Bruce Rosen, co-owner of The Boddy Shoppe Gym, who adopted Rosen from foster care, and helped the underweight teen build up his self-confidence and his body through weight lifting. It wasn’t long before McBride Rosen was entering the Special Olympics and competing in weight lifting. Milton took part in the Special Olympics and spent a lot of his time at The Boddy Shoppe Gym training.

“When I first met Milton, I was a kid, probably five, six years old. And for me, it was just another buddy,” said Johnson. “Milton was one of the ones who showed me how to start working out.”

But weight lifting wasn’t the only influence McBride Rosen had on Johnson’s life. Johnson and his family ended up moving in with the Rosens, and the bond between the boys grew stronger. Johnson’s father, Rocky Johnson, was a Hall of Fame wrestler with the WWE, and when that career ended, he was too proud to get a job to support his family. He began to drink heavily. It was McBride Rosen who finally got him to stop drinking.

“Of all the people, Milton became somewhat of a saving grace to my dad,” explained Johnson.

“He took the bottle one time and knocked it over.. He knew it was no good and he knew it was hurting me and he didn’t want to see me hurt,” Rocky Johnson said. “He had tears coming down his eyes. That touched my heart. That would make me cry… He changed everything for me.”

He hasn’t had a drink since.

A child with Down syndrome who grew up in foster care to be adopted as a teenager became a force in Johnson’s life, helping him to become the person he is today. His love, compassion, friendship, and support inspired Johnson throughout the years.

“You got somebody who just comes around and is not judging you and looks at you and loves you and will cry with and [says] ‘I got you,’ said Johnson. “And then probably the fact that it’s Milton, who has Down syndrome and this connection happens. His heart is boundless. The love he has is boundless. The empathy is boundless. That’s how Milton has impacted my life in ways that I could never have imagined.”