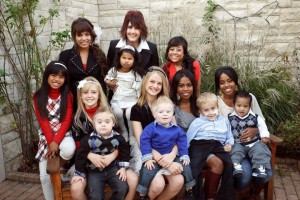 The story of Renee and Derek Loux, who have spent their lives courageously adopting disabled and disadvantaged children from around the world.

Renee Loux is a dreamer. Since the age of 7, Renee’s had a desire in her heart to care for orphans. She shared those desires her husband, Derek Loux. Derek was a gifted musician whose passion for adoption began as a young boy. Together, the Louxs set out to make their dreams come true.

Renee’s parents brought her to the Marshall Islands when she was nine months old. A daughter of missionaries, she spent the first ten years of her life stationed there. In that environment, her young heart became burdened for children. Years later, while teaching in the U.S, she revisited the Marshall Islands for a short mission trip that changed her life forever. During the trip she met Derek for the first time. He fell head-over-heels for Renee and asked her to marry him after only 8 days together. In 1992 the couple wed, and their adventure began.

Renee gave birth to her first child two years later. Josiah was a beautiful boy born with a severe case of spina bifida. Renee and Derek had two and a half years with him before he passed away. Enduring the pain together, they found strength and comfort in God’s love. In 1997 they had a girl named Sophia, and three years later another daughter named Michaela.

For most Americans, two children make for the average size of a family. Yet the Louxs never wanted to be average. They longed to obey the biblical command found in the book of James (chapter 1, verse 27): “Religion that God our Father accepts as pure and faultless is this: to look after orphans and widows in their distress and to keep oneself from being polluted by the world.”

Seeking to live out that verse, they adopted twin girls Teyolla and Keyolla from the Marshall Islands in 2002. Less than a year later they took in Telma, another girl from the Islands. Born with severe scoliosis, Telma was abandoned by her father and neglected by her mother. She ended up alone, fighting to survive on the streets. Renee promised to get her the help she needed. She kept that promise by welcoming Telma into the family.

In December of 2008, Derek and Renee traveled to the Ukraine to adopt three boys with special needs: Sasha, an energetic child with spina bifida, and Ethan and Silas, who both suffered from Down syndrome. The journey had its difficulties. Derek’s journal entry displays his precious humanity: “I was thinking, this is exhausting, expensive, uncomfortable and it doesn’t feel very rewarding right now.” What am I doing in some little Soviet car in the dark, in the middle of rural Ukraine in frozen December, as the driver dodges cats and potholes?

In that moment, Derek heard God speaking to his heart: “Derek, do you know how far I travelled to get you and bring you back? I had to be separated from my Son, in order to get you, just like you are separated from your children in order to get these boys. Do you know how expensive it was for Me to purchase you? It cost me everything. Do you know how broken, sick, damaged, twisted, dirty, smelly, and hopeless you were? And at the end of it all, you had nothing to give me or add to me. I did it for you. I emptied myself and became nothing so that you could have it all. This is redemption.

That experience marked his heart with a powerful revelation that adoption is a form of redemption. Derek believed that God was removing a selfish human love and replacing it with an “agape” love that cares for others even when love isn’t reciprocated. The Louxs wanted to make sacrifices for love. They successfully brought home the boys, who were sick and worn down from their stay in the orphanage. In a short time and with much medical care and attention, they were noticeably healthier and happy. The story of their adoption was later told in a beautiful children’s book called Redemption. In addition to their boys, the Rouxs continued on by adding two more girls, Leeann and Sana from the Marshall Islands.

Derek once said, “I wanted something to live and die for, to breathe and bleed for. I’m not interested in trying to figure out ways to make my life safe and preserve my comfort. That’s one of the reasons why we adopt in a radical way. On purpose, I set myself up to where I’ve got so much pressure I gotta run after Jesus…”

In the midst of their journey at 37, Derek lost his life in a tragic car accident, just days before Christmas 2009. He was traveling back from a conference focused on rescuing girls from sex slavery. His death was a great loss to both those who knew him personally and those who connected with him through his beloved music and teachings. He left behind his beautiful wife and ten children. The family bravely forged ahead through deep pain and sorrow.

After Derek’s death, Renee courageously continued to bring home children. Though some would think it crazy to do so after such a loss, Renee knew that she was being led to continue adopting. She welcomed Judah, the family’s first boy from the Marshall Islands. She also began caring for Joanna, a girl from the Islands who is completely blind and non-verbal. Though Joanna came into their family as a 13-year-old, she had the body size of a 5-year-old. Renee received no financial aid for Joanna’s medical and dental needs, instead depending on the generosity of donors to cover the expenses. Joanna is continuing to grow and respond in new ways. She loves to joyfully sing her own little songs, and she is a delight to her family.

Derek’s and Renee’s life together has inspired many people to adopt and care for children. Renee is the founder of the Orphan Justice Center, an organization whose mission is to help rescue, adopt, and restore orphans across the globe. They do a number of things, from bringing resources to pre-adoptive, adoptive, and foster care families to working with children in their community who are recently adopted or are in foster care. Renee travels and shares hopeful truths about adoption. She is a strong voice for justice as well as a loving mother. She recently had the great pleasure of seeing her oldest adopted twins girls marry a set of twin boys. It was a proud moment for her, though she earnestly wished Derek could have been there to share it.

Though it’s difficult raising her children without a father, Renee carries on with grace and strength. As she remarked in her family’s blog, “I will never understand this side of heaven, why Derek had to die, but, I know my God is sovereign and I can trust him. Even without an answer to the ‘why’, I can see the fruit of his beautiful life. I see it in the eyes of our amazing children. I hear it in the voices of those who share with me how their own lives were impacted by Derek’s passion and vision for loving, caring for, and restoring orphans. I see it as I remember what was once just a dream in our hearts, taking root and becoming reality as we rescued 10 children, teaching them along with our biological children, to be rooted and grounded in the love of Christ Jesus, which would help restore them all.”

This life will end for all of us. The dreams that we fight for now can impact generations to come. A life devoted to caring for weak, vulnerable, and voiceless children is a life well-spent. May we all learn from Derek’s and Renee’s example and open our hearts to the children of the world.