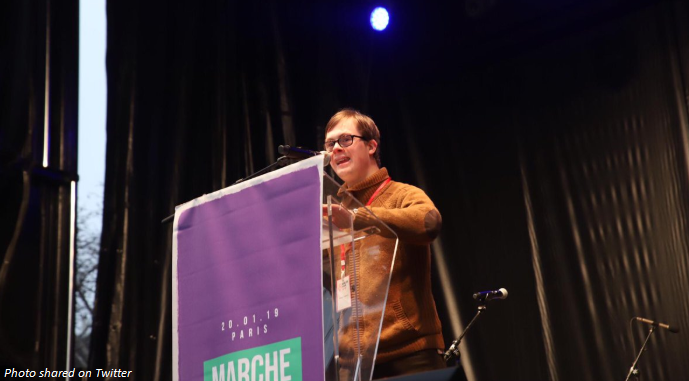 While 700,000 marchers flocked to Washington, D.C. to stand up for the rights of the preborn, a record number were also marching for in Paris. The March for Life in Paris, a non-denominational and non-partisan event, is the largest annual pro-life gathering in Europe, and the number of attendees continues to grow. In 2009, a reported 20,000 people came to march. This year’s 13th annual event saw an estimated 50,000 people, a massive increase, attend the January 20th protest, many of whom were between 18 and 35 years old.

One powerful witness came from one of these young people. Francois, a 20-year-old man with Down Syndrome, addressed the crowd. “I have a heart like you,” he said. “I am like you. I love life! My life is beautiful, even with Trisomy 21. I ask you always to protect the weakest.”

People with Down syndrome are routinely targeted for eugenic abortion, especially in Europe. In France in 2015, the abortion rate after a diagnosis of Down Syndrome was reported as 77%. In many parts of the European Union, it’s much closer to 90%. In Iceland, it is almost 100%, with just one or two children born with the condition each year.

READ: Woman with Down syndrome addresses UN: Stop targeting us for extinction

The March for Life in Paris began in 2005, as French pro-life organizations came together to protest 30 years of legalized abortion. It is held on or around the January 18th anniversary of the legalization of abortion in France. This year’s Paris March for Life had as a theme the issues of conscience protections for health care workers, among others. 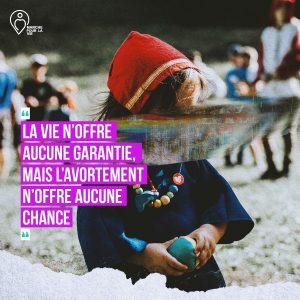 Life offers no guarantee, but abortion gives no chance.

Also forefront among the issues in this year’s march was the recommendation of France’s highest bioethics body that IVF should be available to all, and an “expansion of eugenic policies.” Nicolas Sévillia of the Jérôme Lejeune Foundation, which helps organize the Paris march, has put this march in the context of the “yellow vest protests.” The protests are a populist movement, whose social and political influence points to the possibility for popular manifestation to change the national discourse on various issues. Hitherto, bioethical and social issues have been excluded from what has been called “the great national debate.” The March hopes to change that, as yellow vest protesters joined the pro-life march.

This year, Argentina figured prominently in the March, as senator Mario Fiad, president of the Health Commission, attended and addressed the March. In August, the Argentinian senate voted against the legalization of abortion, despite international pressure. A strong showing of Argentinians traveled for the gathering, wearing handkerchiefs in the color of the Argentinian flag, festooned with pro-life slogans.

READ: France bans positive Down syndrome video because it may ‘disturb’ post-abortive women

Pope Francis, himself a native of Argentina, addressed the March through the Papal Nuncio, saying, “All the evil done in the world can be summed up in contempt for life.” He encouraged the participants to “bear witness to the inalienable values of human dignity and human life.”

France has around 220,000 abortions per year. It is estimated that one in three French women have abortions in their lifetimes.