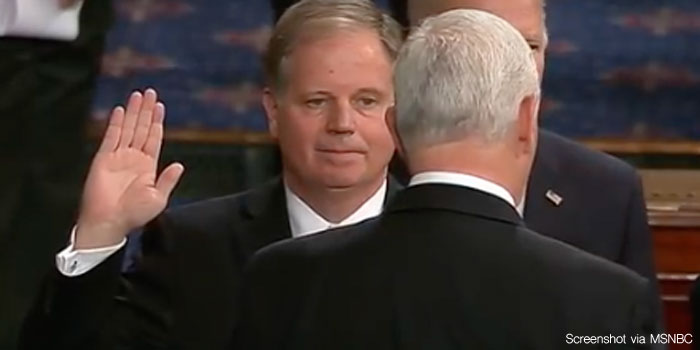 In Alabama’s special election to determine who would replace Jeff Sessions in the U.S. Senate, Democrat Doug Jones defeated Republican Roy Moore. Sessions, a pro-life Republican, is currently serving as Attorney General for the Trump administration. Jones served as a United States Attorney until 2001, and continued to practice law before running for Senate. Thus, he has not had much opportunity to develop a record, either pro-life or pro-abortion. However, his statements, as well as his support for Planned Parenthood and NARAL, suggest that those who categorize him as a pro-abortion senator may be correct.

During a September interview with host Chuck Todd on Meet the Press, Jones was asked about his position on abortion. He echoed a typical pro-abortion talking point:

Even when asked directly by Todd if he would support a 20-week abortion ban, which has since been introduced in the Senate, Jones’ answer was concerning: “No, I’m not in favor of anything that is going to infringe on a woman’s right and her freedom to choose,” he emphasized. “That’s just the position that I’ve had for many years. It’s the position I continue to have.”

Then, curiously, just one month later, it seems that Jones changed his tune on late-term abortion — or at least attempted to. From a November interview with AL.com:

To be clear, I fully support a woman’s freedom to choose to what happens to her own body. That is an intensely, intensely personal decision that only she, in consultation with her god, her doctor, her partner or family, that’s her choice.

Having said that, the law for decades has been that late-term procedures are generally restricted except in the case of medical necessity. That’s what I support. I don’t see any changes in that. It is a personal decision.

In addition, mere days before the election, Jones’ campaign released a brief ad claiming that Roy Moore’s campaign had mischaracterized Jones’ abortion views with “abortion attacks.” Jones’ campaign ad claimed that “Doug Jones does not support late-term abortions and never has.” ‘Never has’? What about the interview with Chuck Todd?

Because of Roe v. Wade’s companion case of Doe v. Bolton, abortion is allowed for all nine months of pregnancy in the United States. A handful of states commit abortions up until birth for any or no reason. An abortion carries significant risks for women, including the risk of death, and even late-term abortions are frequently committed for similar socioeconomic reasons as those committed earlier in pregnancy.

Jones surprisingly also noted in November that “people are fairly comfortable with where the law has been for decades” — and in Alabama, the law restricts abortions past 20 weeks, which is all the more reason Jones should be in favor of a federal ban.

As Live Action News contributor Sarah Terzo has extensively laid out (and as data from even pro-abortion organizations shows), the majority of late-term abortions are not committed “in the case of medical necessity.” Former abortionist Dr. Anthony Levatino points out why abortions it is never medically necessarily to deliberately kill a preborn baby:

Planned Parenthood and NARAL cheered Jones’ win. They were not so active in this race, however, as Alabama is not known for electing pro-abortion candidates. Alabama Senator Richard Shelby, though he was elected as a Democrat in 1986 and 1992, has since switched to the Republican Party, and has a 100 percent rating from the National Right to Life Committee.

Jones would do well to remember that he also has been elected to represent Alabama, a state which has been consistently ranked in the top half of the states most protective of human life. Further, exit polls indicated that abortion is an important issue to Alabama voters, and that a majority want abortion to be illegal. According to an early NBC exit poll, among Jones voters, less than two-thirds (64 percent), answered that abortion should be “Legal in most cases” (41 percent) or “Legal in all cases” (23 percent).

As Michael New of the Charlotte Lozier Institute has written, Jones did not win because of his pro-abortion views, and the right to life is an important issue among Alabama voters, regardless of what the abortion industry wants voters to believe.

The people of Alabama deserve elected officials who vote pro-life. Fortunately for Jones, he’ll have the opportunity to prove that he means what he says when the 20-week abortion ban comes up for a vote in the U.S. Senate.