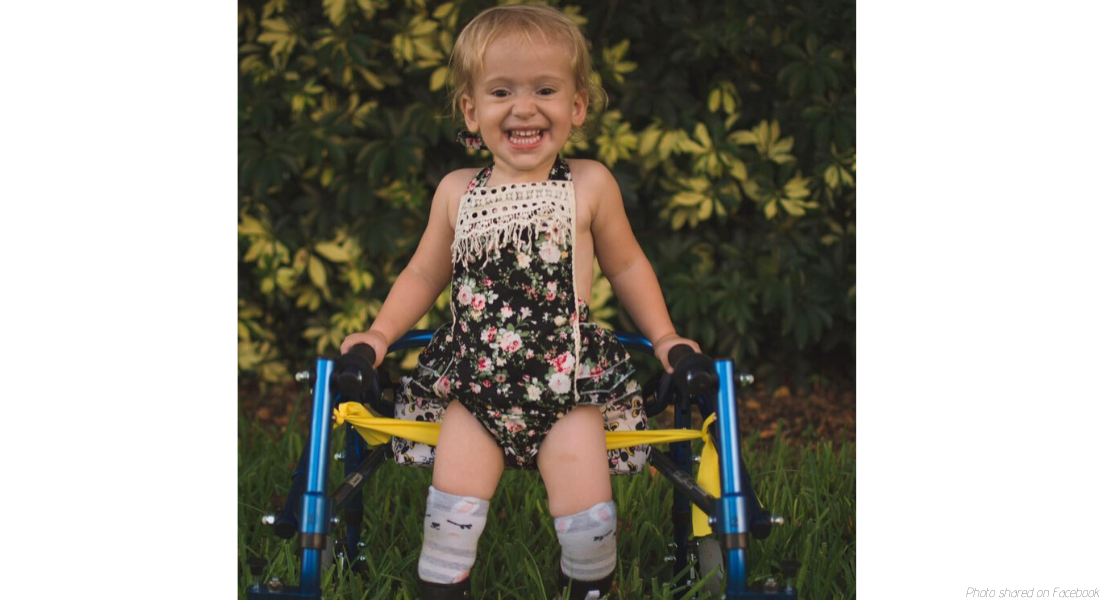 A little girl is walking even though doctors believed she never would, and encouraged her mother to have an abortion. Harper-Mae is a happy toddler who is destroying the boundaries set before her and refusing to let spina bifida keep her down.

Florida mom Erica Ardolino-Comparin was 37 when she got pregnant with Harper-Mae, and was told at 18 weeks that her daughter would have myeloschisis, the most severe form of spina bifida. But that wasn’t all — the doctor quickly began pressuring her to have an abortion.

“We were devastated when we were advised to terminate the pregnancy. It felt like we had just lost our child even though we hadn’t,’ Ardolino-Comparin told the Daily Mail. “Even when we told the doctor we were choosing not to go ahead with the option to terminate, he proceeded to give us this option multiple times afterwards and even let me know that if I were his wife he would tell her the same thing. Before Harper was born, our first MFM told us that Harper would be paralyzed from approximately mid-stomach/belly button down.”

Despite the pressure put on her, Ardolino-Comparin refused an abortion — and found information saying that it would, in fact, be possible for Harper-Mae to walk one day. But there were a lot of surgeries to endure along the way. When Ardolino-Comparin was 25 weeks pregnant, Harper-Mae had surgery while in the womb, where doctors operated on her spine and performed seven procedures on her brain.

Not sure why I was so surprised when Harper busted out these moves today, but watching her walk backwards with no help made my heart soar. This little lady is definitely not going to let anything stop her. ❤️ #spinabifida Johns Hopkins All Children's Hospital 

Posted by Growing Up With Harper Mae on Tuesday, February 25, 2020

In September of 2016, Harper-Mae was born paralyzed from the torso down, and doctors said she would stay that way her entire life. Yet with therapy and frequent trips to Disney World, Harper-Mae proved her doctors wrong, and is able to walk. Originally, the goal with therapy was to help give Harper-Mae any kind of mobility — but she quickly blew past that goal, and was able to walk with the help of a walker.

Today, Harper-Mae doesn’t need her walker full-time; she only has to use it when walking long distances.

“Whilst we know that mobility and function does not define a child, nor would we ever let it define Harper or change our love for her, it was the most amazing moment to watch her begin to walk,” her mother told the Daily Mail, adding:

We have been told on multiple occasions that Harper’s functional ability to walk and ambulate in the manner that she does is a true anomaly, and we love watching her work as hard as she does to keep progressing and gaining more and more strength. Watching Harper’s progress and her showing that she is more than a medical diagnosis makes us extremely proud.

While growing up with spina bifida isn’t always the easiest and certainly has its ups and downs, Harper has been able to live life just like a normal three-year-old little girl. Multiple people have expressed their amazement when finding out that Harper has spina bifida, and that her opening began in the thoracic region of the spine. They’ve told us that if they are having a difficult day, seeing one of Harper’s posts is just what they needed to put a smile on their face and make the day better.

Even during the difficulties of the COVID-19 pandemic, Harper-Mae still managed to reach another milestone: riding a bike without holding her feet down.

This girl is absolute magic!!! After working so hard in therapy on learning to ride a bike with no straps, Harper is finally doing it. One of Harper’s goals for her last 3 week intensive therapy program was biking, and she did it!!! Spina Bifida doesn’t have anything on this little cutie.

“Harper’s physical therapy sessions vary based on the combined team’s goals for her (the team includes Harper, her mom and dad, and her physical therapists),” her mother said. “Overall, Harper’s physical therapists work hard to make sure that she gets to have fun whilst doing her work. They create obstacle courses for Harper to complete, let her do puzzles, play her favorite music for her, and let her play some of her favorite games whilst doing a variety of different exercises (climbing stairs, walking, side steps, high kneeling, static standing, etc).”

Medical advances for spina bifida have become more and more common. Prenatal surgery on babies with spina bifida has been found to restore brain structure, and increasingly more hospitals are successfully performing these surgeries on children in the womb. Knowing these developments, and seeing how far children like Harper-Mae are able to go, should call into question the purpose of pressuring moms like hers to abort their babies. At its core, these recommendations are based in ableism, not necessity. And thankfully, Harper-Mae’s mother was able to stand up for her daughter.

“We believe Harper is destined for great things and that she can help to change the world. At only three years old, Harper has been able to impact many people and we know that she will continue to do so for the rest of her life,” her mother said. “We truly feel that she will be a bright light in our world and that she will help to not only redefine spina bifida but change the perspective that people have about disabilities in general.”