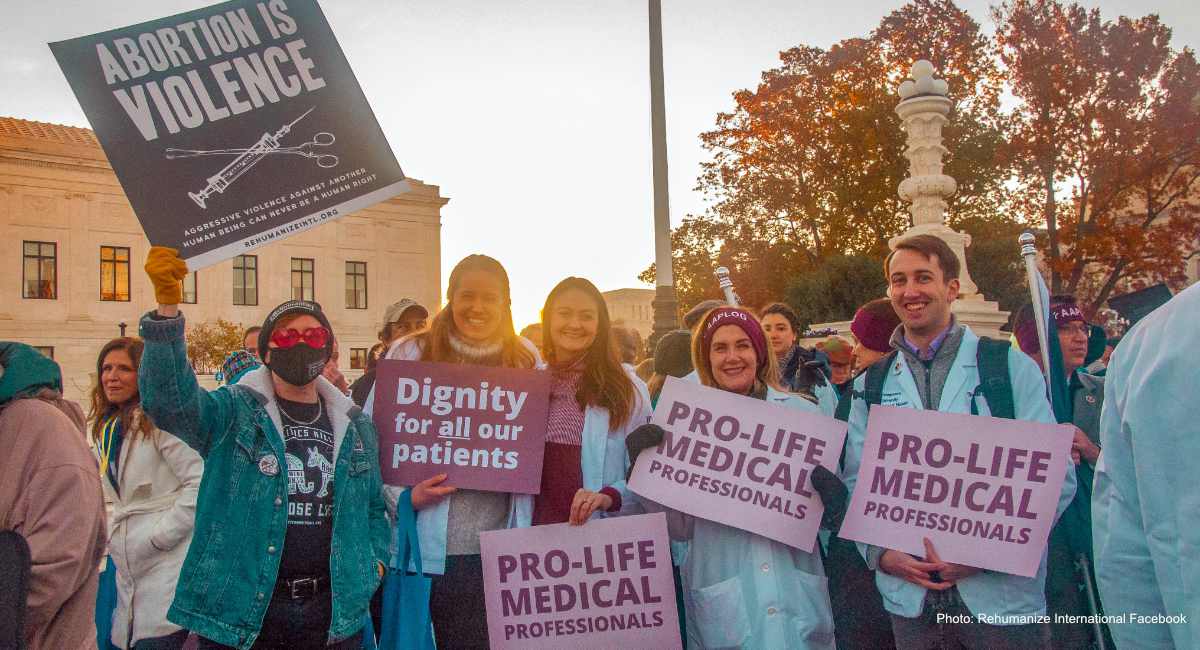 On December 1, 2021, The Supreme Court heard oral arguments in Dobbs v Jackson Women’s Health Organization, which concerns Mississippi’s ban on abortions past the 15th week of gestation. This case explicitly challenges previous precedents established by the Court in Roe v. Wade and Planned Parenthood v. Casey, which stipulated that abortions must be legal up to the arbitrary, vaguely defined, and ever-moving point of so-called “viability.”

A multiplicity of groups, organizations, and individuals gathered in front of the Supreme Court that morning to demonstrate support for the Mississippi law and for life in general, outnumbering the pro-abortion contingent by a large margin. The diversity of the pro-life side was striking — there were groups from conservative to anti-capitalist, of every (or no) religious tradition, of all professional and educational backgrounds, who had traveled from every region of the nation.

Some came from as far away as the West Coast. Kristin Turner, Executive Director of Pro-Life San Francisco, a secular, non-partisan, youth-led organization, was one of them. Asked for her perspective on the rally and the prospects for a pro-life future, she had this to say: “Electricity was flying at the Supreme Court. The pro-life movement is continuing to build a diverse coalition who believe in rights for unborn people. I am hopeful that the Supreme Court will make the right decision and put the power back in the hands of the people.”

Representing Rehumanize International, an organization dedicated to consistent life ethics,  Executive Director Herb Geraghty said he was proud to stand outside the Supreme Court with the pro-life movement. “Bringing our diverse coalition of people from all races, ages, religious backgrounds, and gender identities shows the pro-abortion side that the pro-life community is not the caricature of the ‘old conservative Christian cisgender white man who wants to oppress women.’ This is a human rights movement, and we will not be silenced.” He concluded: “Anyone can be pro-life, and everyone should be.”

Post-abortive women were a sizable, powerful presence among both the rally participants and speakers on Wednesday. One woman among the army of those in bright red shirts promoting the Moral Outcry Petition, who prefers to remain anonymous, related her personal story of rape followed by a botched abortion, which left her sterile. “I can’t ever have children now. I’m alone in the world,” she told Live Action News. “That’s why I’m here, so other women don’t have to go through the same heartache.”

Author and speaker Serena Dyksen, a post-abortive pro-life advocate and founder of She Found His Grace Abortion Recovery Ministry, was also present on the ground. “As a post-abortive woman who was hurt by abortion at age 13 after rape, this day is an answer to prayer, and left me optimistic for future women and babies,” she said. “I was so proud to see women who had gone through She Found His Grace abortion recovery, who had felt intimidated at the thought of sharing their abortion regret, boldly share how overturning Roe makes them feel empowered, and how it would give their children dignity.”

READ: This time in our nation’s capital, I didn’t march for abortion. I stood for life at the Supreme Court.

Eddie Perez, President, CEO, and Founder of Vans for Life, is in the business of providing resources to mothers to prevent them from becoming post-abortive. His organization operates a fleet of mobile pregnancy center vans, which park in front of abortion facilities and offer free ultrasounds and counseling on alternatives to abortion. They also provide resources for up to three years after the child is born. “We not only talk to women about how they are capable of being mothers — because they already are mothers as soon as they become pregnant — but how we can help support them in any crisis they may have, and give them confidence,” he said. “When women go into our pregnancy centers, about 90% end up choosing life.”

Perez came to the rally, not just to express support for Mississippi’s law, but to raise awareness and build support for his organization. “We’re very hopeful for any decision that could help save babies, but it’s not just about that. It’s about how we help the women who are having these babies who have no resources or anybody to help support them and give them hope,” he said, “because they just need to know that somebody is in their corner.”

Dr. Christina Francis, Chair of the Board of the American Association of Pro-Life OB-GYNs (AAPLOG), is a doctor who has done her life’s work supporting women. She was one of a large contingent of medical professionals in white coats who made a powerful visible statement in front of the Court, though pro-abortion media attempted to downplay their presence and medical expertise.

“I’m just overwhelmed by today,” she told Live Action News. “We had almost 80 physicians and other medical professionals here with us. And we were all here together to make a visual statement that abortion is not health care, and that, as medical professionals, we acknowledge that the science shows that preborn children are living human beings from the moment of fertilization, and that abortion is harmful for women. I talked with several other people from within the pro-life movement here today who said how encouraging it was to see 80 white coats in front of the Supreme Court.”

Asked about the future prospects of the movement, Dr. Francis said: “I think I feel a tide of change coming in the country when it comes to the abortion issue. And this made me hopeful for that same tide of change to go through the medical profession, so that we can return to healing, rather than killing. We need to return to Hippocratic medicine once and for all.”

A decision in the case is expected in early summer of 2022.