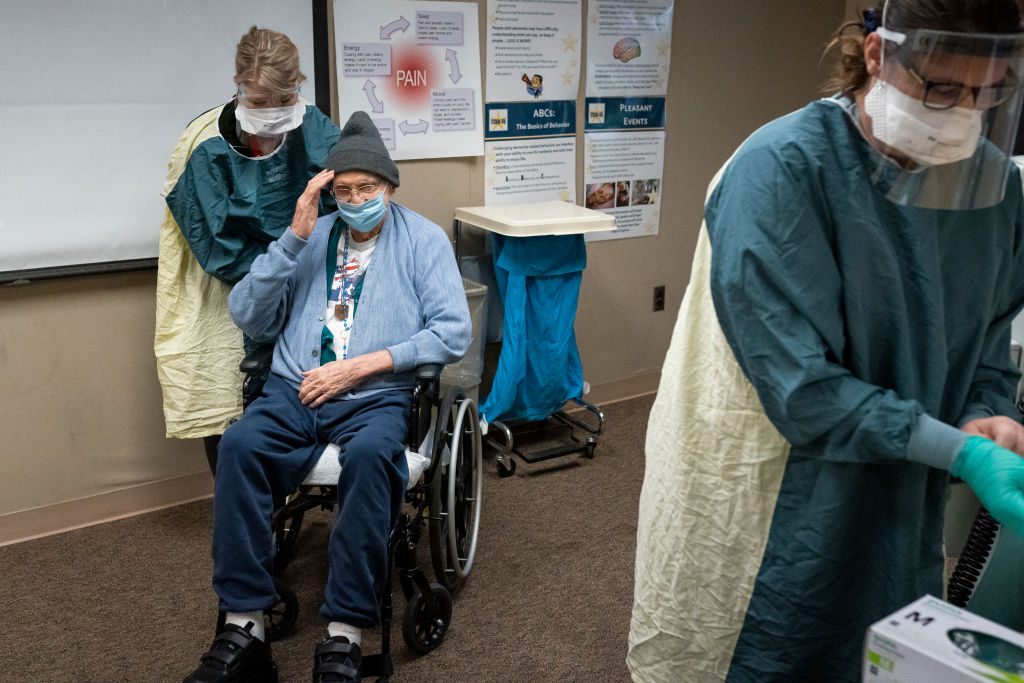 Disability rights advocates claim that people are being denied health care in Oregon. According to NPR, a woman with an intellectual disability was taken from her care home to a hospital, where she was denied a ventilator and was pressured to sign a form allowing the hospital to further deny her care. Doctors allegedly cited her “low quality of life.” When disability rights groups investigated further, they found that, alarmingly, this was not an isolated incident.

NPR reported that the woman contracted COVID-19 in March, and struggled to breathe. Staff quickly wrote do-not-resuscitate (DNR) and do-not-intubate orders for her; further, they instructed the care home to write DNRs for all of their residents in advance, in case they were sent to the hospital as well. Understandably, the woman didn’t realize what doctors were asking her to sign. Fortunately, staffers at the care home got angry and sought help, getting lawyers with Disability Rights Oregon (DRO) involved.

“We investigated and substantiated it,” DRO executive director Jake Cornett told NPR, confirming that there was a person in question “being inappropriately influenced about life-sustaining treatment. And the physician in that case talked about the quote ‘low quality of life’ of a person with a disability.” The woman in the first case was in serious condition and needed to be on a ventilator right away. In a letter sent to State Sen. Sara Gelser, chairperson for the Senate Committee on Human Services, the people advocating for her said they feared she had been “without appropriate and necessary care for two days,” putting her life at risk.

Emily Cooper, the legal director at DRO, threatened to sue the hospital, and the woman was moved elsewhere and put on a ventilator, finally receiving the health care she needed. She eventually recovered, but the case raised concerns.

“The threat of litigation and the threat of exposing the depth and the whiff of discrimination in our state, I think, was enough to get people to do the right thing,” Cooper said to NPR. “But what that meant is you needed to have a lawyer call or you needed to have someone that had the gravitas to push for that.”

READ: Discrimination in health care is already happening, with or without COVID-19

Gelser, for her part, wrote to state officials, demanding the hospital be sanctioned. “I remain deeply concerned about the situation in Pendleton. We only know about it because someone knew to call for help. If that call had not happened and DRO had not engaged, it is not hard to imagine the person would have died,” she wrote in an e-mail, adding, “The providers, as far as I can tell, have been given no clear signal that what they did was wrong and should not occur again. A strong, pointed statement about the rights of elderly and disabled people is desperately needed at this time.”

But even more disturbingly, this woman’s case made disability advocates realize they needed to look out for other such cases — and they found them.

One state official told Gelser her office had been receiving complaints of both hospitals and doctors asking people with disabilities to fill out legal forms allowing them to limit the care they received. Gelser herself said she received reports firsthand. “We had hospitals that were trying to immediately discharge people and saying that they needed to go home for palliative or comfort care, instead of actual treatment,” she said.

Another health care system, believed to be Salem Health, sent a message to group homes for people with disabilities in April, telling them not to bring their residents into the emergency room unless they were dangerously sick. This was concerning, Gelser said, because it “discouraged people from bringing in clients that needed care. It also indicated people would be discharged prematurely — and into group homes that didn’t have the capacity to provide appropriate care.”

Other records uncovered by NPR found that people with disabilities were being denied COVID-19 tests or treatment when they went to hospitals complaining of coronavirus symptoms. Another disability-focused non-profit organization, Benco, had a patient who lived in one of their group homes who came down with COVID-19 symptoms. The man has an intellectual disability, is non-verbal, quadriplegic, and fed through a tube. Sarah Frazzini, BENCO’s executive director, said he was taken to Good Samaritan Regional Medical Center in Corvallis, where staff refused to test him for COVID-19. In front of Frazzini, staff said it would be a “waste of valuable PPE.” It turned out he had pneumonia, not COVID-19, but like the woman before, doctors said he has a “low quality of life.” Therefore, they recommended his group home stop giving him nutrition and health care.

Frazzini, who said the man “lives a dignified and fulfilled life,” was furious. “To have to fight so hard for the COVID test, to hear statements about giving the test being a ‘waste of valuable PPE’ and to have the physician recommend at discharge to end his life is absolutely appalling,” she said at a hearing before Oregon lawmakers.

At least one person with disabilities died after being denied medical care. 45-year-old Sarah McSweeney was quadriplegic, fed through a gastronomy tube, and couldn’t speak. Yet the staff who cared for her said she was able to communicate through various sounds and facial expressions. “And even though she had these medical issues, she was vivacious. She just lived her life,” Heidi Barnett, who worked with McSweeney, told NPR. “She had a pretty full life. And you were blessed if you got to meet her.”

Barrett helped McSweeney craft a legal document stating if she got sick, she wanted full medical care. When she got a high fever in April, hospital staff called Barrett, trying to persuade her to write up a DNR for her anyway. McSweeney didn’t have COVID-19, but aspiration pneumonia, and would need to be on a ventilator. But a doctor called Kimberly Conger, the nurse manager at the home where McSweeney lived, and asked if it would be worth it due to her “low quality of life.”

“We discussed the possibility of her being intubated and letting the lung rest, giving her time to heal and letting the antibiotics do their magic,” Conger told NPR, explaining she got angry when the doctor questioned if McSweeney’s life was worth saving. “And he looked at me and goes: ‘Oh, she can walk? And talk?'” McSweeney was not put on a ventilator or moved to the ICU, and she died of severe sepsis caused by her pneumonia.

For many in the pro-life movement, this news isn’t unexpected. Oregon was the first state in the country to legalized assisted suicide. There, insurance companies have refused to pay for treatment when patients are seriously ill, and instead recommend euthanasia. The inevitable consequence of devaluing human life is that people in positions of authority will feel empowered to decide whose life is worth saving, and whose isn’t.