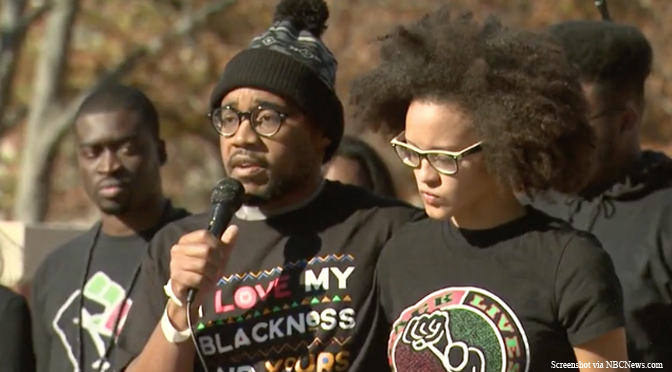 On November 2, 2015, University of Missouri Graduate student Jonathan Butler released a letter on Twitter calling for the resignation of  Mizzou’s president over alleged mishandling of race related issues on campus.  Among Butler’s grievances is his assertion that former President Tim Wolfe contributed to “Planned Parenthood services being stripped from campus.” Butler was referencing a decision University of Missouri Chancellor R. Bowen Loftin made to disallow a Planned Parenthood doctor’s hospital admitting privileges at the University hospital and cancel a clinical intern program with Planned Parenthood affiliates. Missouri state law requires doctors who perform abortions to have clinical privileges at a hospital within 30 miles. These changes were made as part of an investigation after videos from the Center for Medial Progress revealed Planned Parenthood officials manipulating abortion procedures and haggling over the prices of aborted fetal remains.

Chancellor Loftin, welcome to Columbia… You just got here a year ago, and you just made a really big mistake. You thought it would be easier to cave to the political pressure to repress women; we are here today to tell you, you made the wrong decision. We are going to turn up the heat on you so far, you’re not even going to know what hit you.

The Huffington Post reports Jonathan Butler also spoke at that rally. The Post further reported that Butler and other students believe the President’s action to remove Planned Parenthood’s privileges “disrupted the learning experience for marginalized/underrepresented students at the University of Missouri.” Planned Parenthood’s McQuade (pictured right) influenced a student group to deliver over 2,500 petitions asking Loftin to reinstate Planned Parenthood’s admitting privileges and training contracts. (Mizzou eventually caved.) Even with the loss of Planned Parenthood’s admitting privileges, students can still service the organization. In addition, 10 minutes from the campus is the Family Health Care Center, a federally qualified health center whose mission is to provide services to the medically undeserved. Those services include “family planning and prenatal care.” In spite of marginalized/underrepresented students having access to cancer screenings, OBGYN care, family planning and potential training programs through federally qualified health centers, Planned Parenthood claims students’ learning experiences are being disrupted by the school’s decision to break ties with them.

After Tim Wolfe resigned from his position at Mizzou, McQuade released this statement:

In Jonathan’s own words: “This is only the first step, more change is to come.” The clock is ticking for Mid-Missouri women to have continued access to the full range of reproductive health care services, including abortion. Before assuming a new role, we urge Chancellor Loftin to immediately reinstate the appropriate clinical privileges to ensure there is no disruption in health care access for the residents of this community.

Officials must take notice and take action to address issues of race, homophobia, sexism, and other oppressions that impact the lives of people daily–including reinstating critical physician privileges at MU to ensure Missouri does not go back to being a state with only one health center that provides abortion.

What Butler and the Concerned Student 1950 group at Mizzou failed to realize is that Planned Parenthood is primarily interested in promoting their own abortion agenda. Ironically, the Concerned Student 1950 group is defending an organization that was founded by racists who discriminated against blacks, minorities and the disabled. Do the students at Mizzou know Planned Parenthood’s founder Margaret Sanger was a racist proponent of negative eugenics who encouraged forced sterilization for people deemed unfit by society? Do they know Sanger had a ‘Negro Project’ in which she used Blacks to advance her birth control campaign? Have they read that Sanger chose Lothrap Stoddard, author of the “Rising Tide of Color against White Supremacy,” for the board of the American Birth Control League, which changed its name to Planned Parenthood? One might argue that was in the past, but Thomas Jefferson’s actions as a slaveholder were also in that past – but that hasn’t stopped Mizzou students from covering his statue on campus with sticky notes reading ‘racist.’

As a Black woman, I understand the reality of racism and believe it exists on the campus of the University of Missouri and in schools across our country. I want to see racism eradicated in all spheres of society. And this is why I’ll never support Planned Parenthood, an organization rooted in racism which supports the genocide of 16 million black children in the US and which wounds and kills black women like Tonya Reaves.

Planned Parenthood targets the black community by locating many of its abortion clinics in lower income minority neighborhoods. If the Concerned Student 1950 group at Mizzou wants to work on overthrowing systemic racism, it should investigate Planned Parenthood.

In the pursuit of saving black lives, I pray they will work to end abortion, the #1 killer of blacks in America.