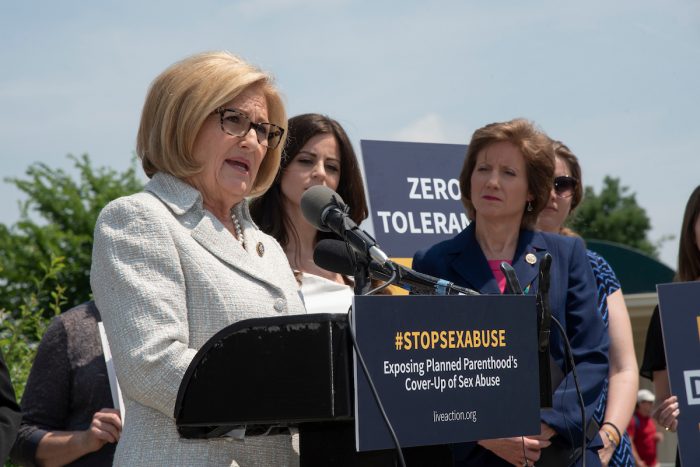 When it comes to abortion, Rep. Diane Black, who represents Tennessee’s sixth congressional district, has been an ardent defender of life. A member of the House’s Select Investigative Panel on Infant Lives, Black has earned a 100% pro-life voting record from National Right to Life. She also recently announced her support for the Trump administration’s “Protect Life Rule”, which requires abortion providers like Planned Parenthood to separate ‘family planning’ services from the arm of their business that commits abortion, in order to receive Title X funding. In 2015, she authored the Defund Planned Parenthood Act of 2015, which passed the House, and she sponsored numerous other pro-life bills, including the No Taxpayer Funding for Abortion Act, and the Pain Capable Unborn Child Protection Act.

Today, Black stood with Lila Rose and other lawmakers to expose how Planned Parenthood aids abusers and covers up the sexual abuse of children.

Black urged Americans to speak up and demand more for our children: “It’s all of our voices together that are going to make a difference, and we’ve got to be loud, and we’ve got to make sure that we get the message out.”

She then pointed out how the new Title X will help hold abortion facilities like Planned Parenthood accountable, as well as give better options for women. “Last month, the Trump administration proposed a new regulation to prohibit Title X recipients from providing abortion services under the federal family planning program,” she said. “This is something we’ve been working on for a long time, and I applaud the administration for taking this step.”

“The integrity of our tax dollars should never be in question, especially those intended for actual family planning and women’s health care. Let me be clear: abortion is not family planning; it is family destruction,” Black continued. “Under these new rules, we have the opportunity to equip women with resources that value and protect their unborn children. And I’m proud to fight alongside of President Trump, Live Action, Susan B. Anthony [List], millions of Americans to defend the sanctity of life from the very beginning.” 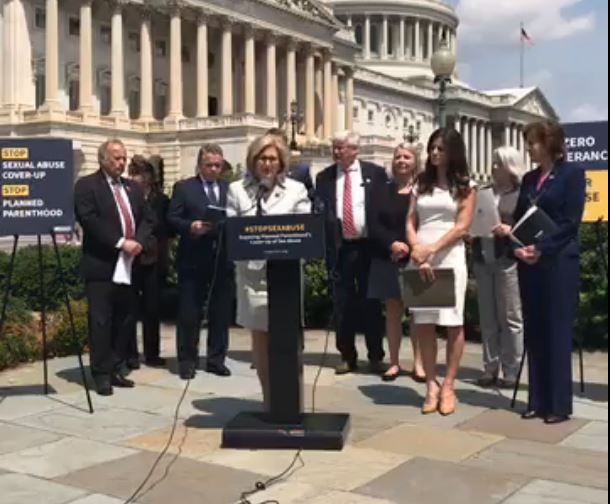 Rep. Diane Black speaks at the press conference with Lila Rose and other pro-life leaders.

“When women are facing the unimaginable circumstances, feel as to they have no other choice, the lies that are coming from the big abortion industry are just heartbreaking,” she said. “Live Action’s findings show us that these same lies are used to willfully neglect reporting these horrific cases of abuse, rape, and sex trafficking. It’s come to light that Planned Parenthood performs abortions on girls as young as 12 years old, and then, sends them right back into the arms of their abusers, without alerting the authorities. It is shameful.”

Black then illustrated the awfulness of Planned Parenthood’s refusal to advocate for victims.

“We read the story of a 16-year-old girl, brought to a Planned Parenthood facility for an abortion, where she pleaded for help, and was ignored. There’s another story, of a 15-year-old rape victim being told that the Planned Parenthood facility, and I quote, ‘didn’t want the hassle’ of having to report an assault to law enforcement,” she said. “The hassle. Her counselor then coded the report as ‘consensual encounter’. Planned Parenthood’s failure to report these heinous crimes does not empower women, or our children. It empowers their abusers. A 2014 report from Loyola University’s Beazley Institute found that Planned Parenthood was one of the most visited facilities for sex trafficking victims, second only to emergency rooms. And in the report, a victim of sex trafficking was quoted as saying that the reason she was taken to Planned Parenthood for an abortion was because, ‘They don’t ask questions.’”

“These stories are sickening, and we’re calling on HHS to investigate Planned Parenthood, and every Title X funding recipient to determine how widespread this reporting failure is,” Black concluded. “The despicable cycle of these facilities turning a blind eye to sexual abuse and exploitation of our children must end.”

A letter has been signed by 56 members of Congress, asking HHS secretary Alex Azar to open an investigation into Planned Parenthood’s cover-up of sexual abuse and trafficking.

Live Action president and founder Lila Rose noted at the press conference, “Unfortunately, because the American taxpayer is funding this group, 1.5 million dollars every day, we also are complicit in enabling the abuse of these young girls and enabling the perpetuating of the abuse of sexually trafficked victims…. We urge Congress, the HHS, and the administration to continue to take action on behalf of our most vulnerable, both those in the womb and our young … victims of abuse.”