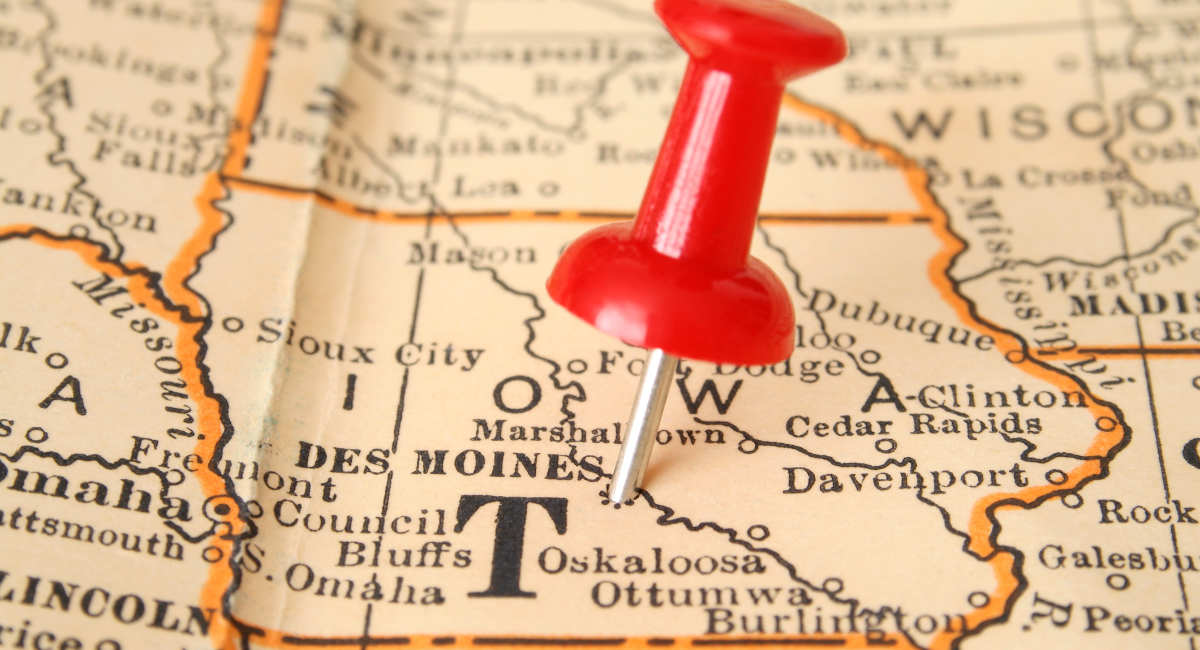 A proposed resolution drafted by Des Moines city councilman Josh Mandelbaum would prohibit police from investigating any matters related to abortion, according to a report published by Axios. Mandelbaum’s resolution would support the codification of abortion on demand, would allow for travel reimbursements for abortion at taxpayer expense, and prohibit the use of government resources to investigate abortion.

Similar pro-abortion resolutions and ordinances have been spreading across the nation and have passed in cities in multiple states. Recently, a largely pro-abortion council in Dallas underhandedly eliminated a number of speakers opposed to that city’s proposed abortion measure. They sent notices out to pro-lifers who signed up to oppose the resolution in the city, telling them the measure had been deferred and would not be on the agenda. Then, the Council placed it back on the agenda the next day without notice, and even cut the audience speaking time, ramrodding the measure through.

Axios noted of the measure in Des Moines, Iowa: “Mandelbaum’s resolution lays the groundwork to resist enforcement should stricter abortion regulations or bans be enacted. Des Moines police would not be able to investigate complaints about health care providers that facilitate access to abortion,” Axios wrote. “It would also direct city staffers to draft an ordinance to prohibit discrimination in housing or employment against someone who has had an abortion or accesses reproductive health services — similar to those that protect sexual orientation and gender identity,” the media outlet added.

This attempted banning of investigations into potential crime may be an issue with law enforcement; in Dallas, the police chief noted that “[h]aving the policy that says you will not enforce a law on the books would be in violation of our police officer’s oath.”

The August 10 Axios article stated that Mandelbaum doesn’t have the support of the Mayor or enough council members to add the resolution to an upcoming regular city council agenda. Media outlet WeAreIowa also reported that the councilmembers aren’t as enthused about the proposal as Mandelbaum. In a statement about the proposal, Councilmember Lynda Westergaard told the media outlet, “I support women’s rights, but this is not a city council issue.”

But Jenifer Bowen, a longtime pro-life activist and past CEO of Iowa Right to Life, warned, “The city council member who introduced the resolution says that there is not enough support yet. But is that just smoke and mirrors? On Monday will we see a similar situation like in Dallas, Texas, where they lied to pro-lifers and told them it was off the agenda, voting it back on that night?”

The Councilman mentioned his pro-abortion proposal on his Facebook page, writing, “We should do what we can at every level of government to protect access to abortion and reproductive health care. I have drafted a resolution with specific actions that we can take as a city. If you agree that the city Council should act like and share this post.” At the time of the writing of this post, Mandelbaum’s post had been shares three times. On Twitter, Mandelbaum explained his reasons: “Governor Reynolds is trying to ban abortion in Iowa through court action. That is why cities like Des Moines should take the steps we can to protect access to reproductive health care. Read about the steps that I’ve proposed for Des Moines.” 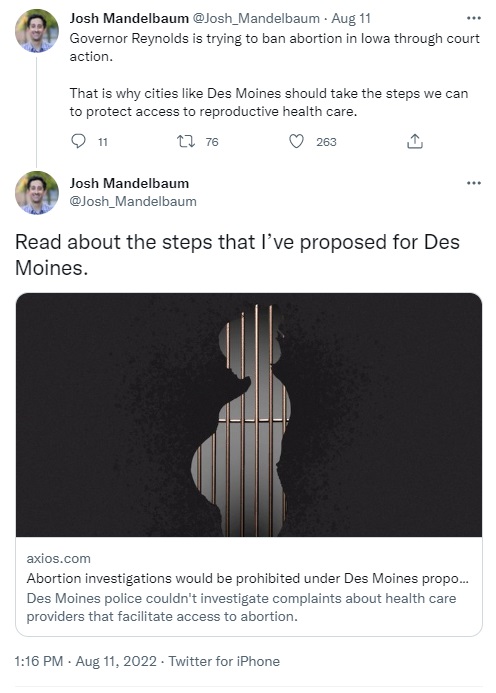 “Abortion activists in Des Moines fear that the murder of unborn babies could eventually be illegal in Iowa,” Bowen told Live Action News. “Iowa law prohibits abortion after 20 weeks. This proposed resolution ensures resistance to enforcement should Iowa ever pass stricter abortion legislation. With the resolution’s passage, women continue to be harmed, unborn babies still die and local police officers would be forced to violate their oath.”

Live Action News checked the agenda of the Council and did not see Mandelbaum’s proposal at the time of publication, but pro-lifers in Des Moines and other cities must be pro-active, according to Bowen. “Take no chances! Please raise your voices in Des Moines!” she said. “Let the council know that our capital city should not be an abortion haven were abortion ever outlawed in Iowa.”

Editor’s Note: An earlier version of this article misspelled Jenifer Bowen’s name and has been corrected.