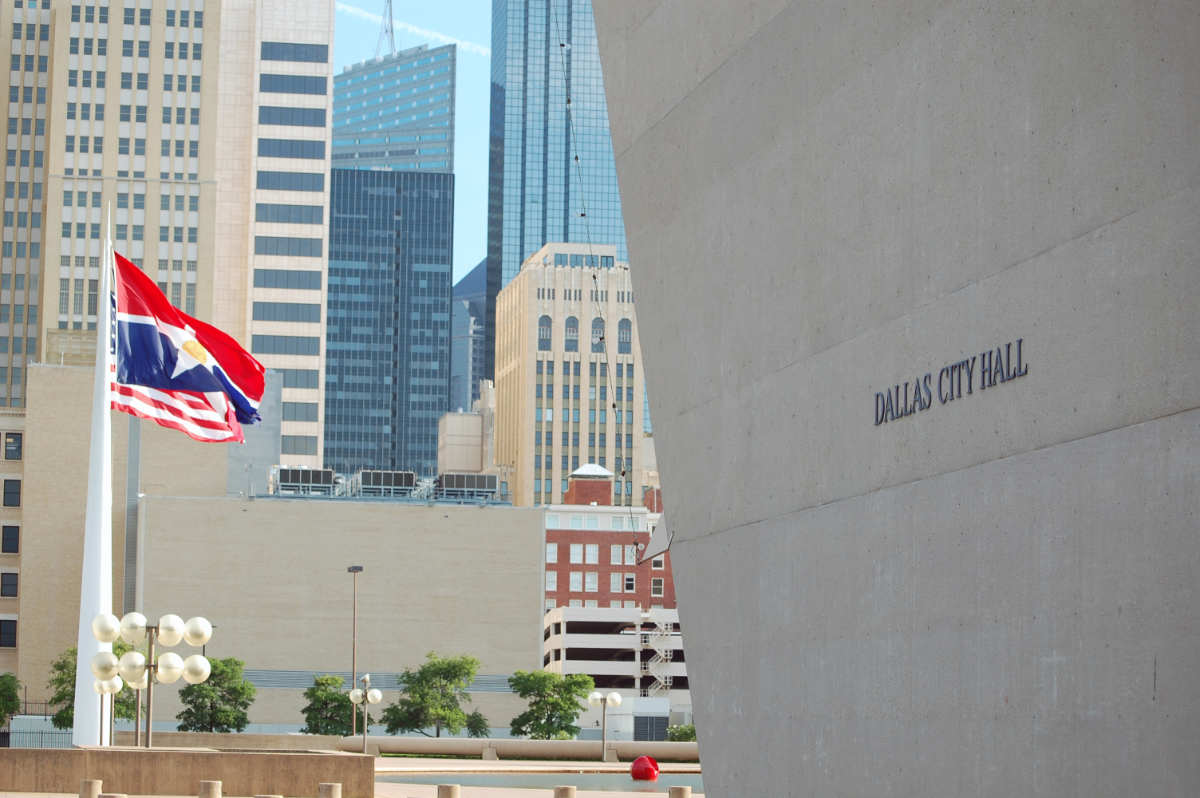 Pro-lifers slated to testify at a Dallas City Council meeting Wednesday regarding a pro-abortion resolution to deprioritize police investigations of abortion say the Council was underhanded. It e-mailed notices to multiple pro-life speakers claiming that the resolution vote had been deferred, then voted it back onto the agenda for a vote that day. This deceptive move resulted in several pro-life speakers being unable to express opposition to the measure, which passed by a majority of Council members.

The Reproductive Rights Resolution modeled after the so-called “GRACE Act” says it is the “policy of the City that investigation of or support for the prosecution of any allegation, charge, or information relating to a pregnancy outcome or any party thereto will be the lowest priority for enforcement…”

“The pro-life movement has prayed and labored for 49 years for the overturning of Roe, and we in Texas are elated that ours is an early state banning abortions following the Dobbs decision of June 24,” Karen Garnett, Chief Culture Officer for Dallas based Heroic Media told Live Action News. “For this so-called ‘GRACE’ (Guarding the ‘Right to Abortion Care’ for Everyone) Act to make its way into City Councils and County Commissions as an attempt to circumvent and undermine State Law protecting preborn children and their mothers from the violence of abortion is outrageous.”

Small number of pro-lifers in attendance

Pro-lifers were alerted to the measure after it passed the City’s so-called “Quality of Life Committee” on August 2. Attorney Michael J. Seibel then sent a letter to Council members on behalf of Abortion on Trial warning that their actions could expose the City to liability from women who have been harmed by abortion. After this, the Council e-mailed pro-life speakers to say that the agenda item had been deferred and would not be heard as planned.

“Our office has received and request from a city councilmember to defer Agenda Item 67. This email is to inform you that no speakers will be called or registered on the item as it will not be heard/discussed due to the deferral request,” the e-mail stated.

This resulted in several pro-life speakers not attending the Council meeting, including Seibel — who had evidence of the harm abortionists like Curtis Boyd pose to Dallas women.

The following day (August 10), a small number of pro-life activists present at the meeting discovered that the deck was stacked against them when Councilman Adam R. Bazaldua came into chambers wearing a “Bans Off Our Bodies” shirt decked out with Planned Parenthood buttons. The resolution was immediately voted back onto the agenda where speaker time was reduced from the original three-minute time slots down to one minute. 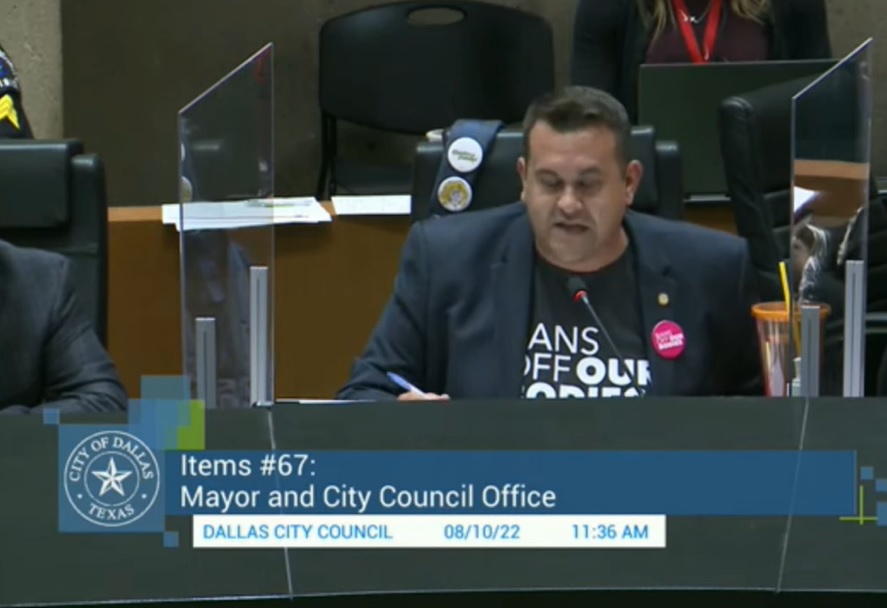 Immediately Mr. Seibel and several pro-life activists phoned the City Attorney’s office to request that the item be deferred since the public was not granted sufficient notice to respond. But, although the City Attorney was in Council chambers a few floors down, his office said that there was no one available to take their calls. Shortly after, an e-mail notified pro-lifers who had previously signed up to speak that they could “log on as we will allow speakers on Agenda Item 67,” which was heard an hour later, with insufficient time for most speakers to even discover the change.

“This was an egregious overstep on behalf of the Dallas City Council,” Jamie Jeffries, Executive Director of Abortion on Trial and a speaker at the meeting, told Live Action News. “Police promise to uphold the law and this council just voted to require them to do the opposite. It is no wonder the Council intentionally misled the public and snuck this issue back onto the agenda despite notifying those set to testify that it had been deferred,” she said. “It is apparent that Dallas City Council members are prioritizing protection for abortion providers over ethics, proper legal process, and the public’s right to vocalize concerns regarding their city.”

Karen Garnett stated, “To learn from a local colleague this morning, an hour after the meeting had started, that the Mayor and City Council had ‘suspended the rules and added the item back onto the Agenda,’ was both shocking and disturbing… To say that I am incensed over the roller coaster actions of the Dallas City Council on such a critically important matter is an understatement.”

Resolution would cause police to violate their oath

The dissenting vote for the resolution came from Councilmember Adam McGough who relayed a personal story which he and his wife faced when a doctor advised that they abort their son.

“A little over 14 years ago, our doctors invited us into the meeting and said you need to schedule the procedure next Tuesday. They told us that he would not have a quality of life, likely not make it to birth… and that the advice [of the doctors was] to abort that child.” Councilman McGough said that he fell back on his faith in that moment. “I said, ‘I don’t care if that baby lives two more months, six more months – years or whatever, we’re going to love every day of that child’.”

The Councilman then stated emotionally, “I cannot imagine my life without Cooper.” 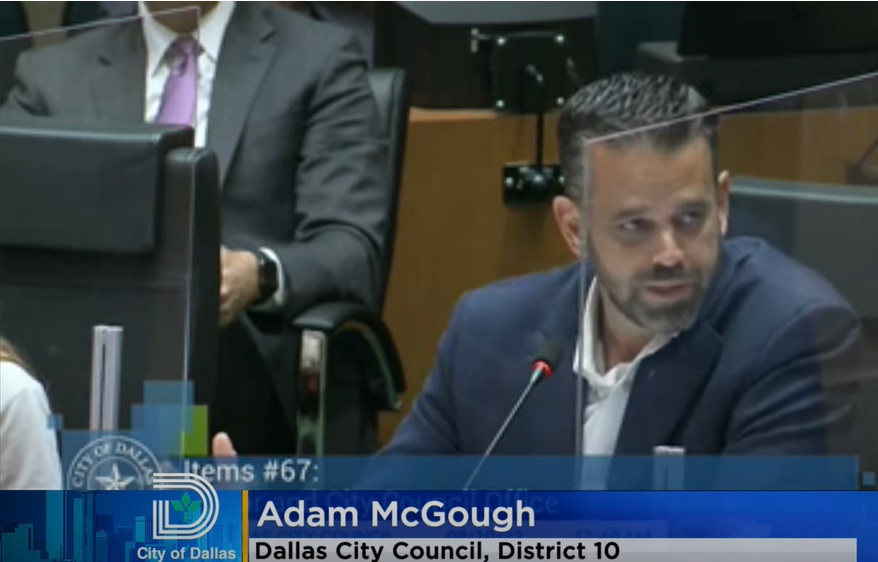 Councilman McGough told members that the he fundamentally disagreed with the measure and warned that by moving forward, “We are opening ourselves up to cause of action that are gonna tie up and cause innumerable amounts of money in dealing with this issue.” He also pointed out, “We haven’t talked about the oath that our police officers take to defend and protect the Constitution as well as the laws of this state and that this resolution would cause our officers to violate their oath.”

Dallas Police Chief Eddie Garcia admitted to the Council that his officers were ambivalent about the resolution’s language.

The language of “pregnancy outcomes” used in the GRACE Act has been seen in multiple pieces of pro-abortion legislation in recent months, and is so broad as to potentially discourage law enforcement from investigating cases of post-birth infanticide, which is (for the time being, anyway) illegal.

According to Garnett, Seibel is considering possible legal action against the City Council. “He is reaching out to Texas Attorney General Ken Paxton to investigate the City Council’s actions in violation of and infringement upon our civil rights,” she said. “We are grateful for his legal expertise and guidance and will be following up with General Paxton ourselves as well. This is far from over.”