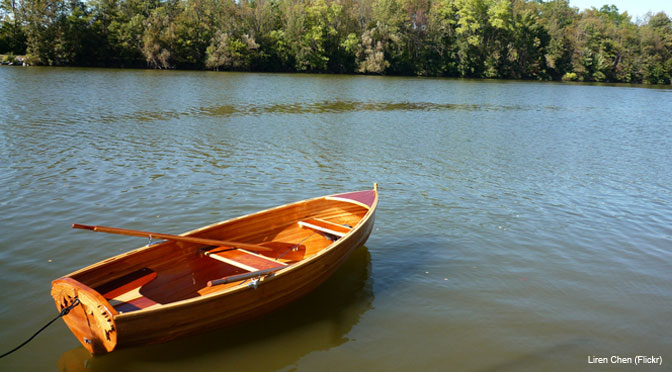 On the night of July 1, 1807, the schooner, Island Empress, sank in a storm off an uninhabited island to the south-east of Samoa.

The ship’s cook and quartermaster, Rupert Staggs, managed to swim to land and, miraculously, a wooden cask containing a very much alive ten-month-old baby girl, daughter of the ship’s captain and his wife, washed ashore the next morning. They were the only survivors of the shipwreck.

The island was small but there was a freshwater pool and sufficient food from the wreck and growing wild to provide a subsistence diet for the pair. The major problem that Staggs and baby Lydia immediately encountered was from scorpions which were plentiful on the island. The scorpions’ stings, while painful, were not fatal for adults but were a constant serious threat to Lydia’s life.

Staggs, with his boots, long trousers and a watchful eye, suffered few stings but he was constantly fearful of putting Lydia on the ground. The only way he could deal with the problem was to use his shirt as a sling in which he carried Lydia around all day long.

Some eight months or so after the fateful stormy night Staggs sighted a ship off the island and was able to light a fire in time to attract the crew’s attention. Once on board he was questioned by Captain S. Thomson about his experiences. When asked what had happened to the rest of the people on the Island Empress, Staggs, according to the record taken at the time, candidly stated that young Lydia had also survived.

Captain Thomson: And was this little girl the only other survivor?

Captain Thomson: Where is she now, what has happened to her?

Staggs: To be honest with you sir, I put her to death.

Staggs: Yes sir, because of the scorpions I had to carry her around constantly and after about six weeks of that I got fed up with it all. I didn’t know what else to do so I ended her life as quickly as I could.

Captain Thomson: But that was a terrible thing to do, man! Besides, you must have realised that another ship was likely to come along eventually and save you both.

Staggs: I did know that, but all the same I did not like carrying and providing for that child all the time. I reckoned that if this child was completely dependent on me, which she was, then it was only my decision as to whether she lived or died.

Captain Thomson: You will be called to account for such a decision Staggs.

In early 2001 the Sampsen family – Allan, Rose and six-year-old Aaron- set out from Portsmouth on a long-planned round-the-world sailing holiday. Just three weeks later the holiday was to end in disaster.

While crossing the equator their catamaran entered the doldrums and was left sitting stationary on mill-pond-smooth seas. This was not the worst of their difficulties however. An explosion in the galley apparently killed Rose outright and in his efforts to put out the fire Allan also lost his life. Before the boat went down Aaron managed to grab a life preserver and thus found himself adrift alone in the ocean.

Fortunately, or perhaps unfortunately for him as it turned out, little more than 24 hours later the Bermuda-registered single-masted yacht, Southern Aurora, drifted right up to where Aaron was floating. He was unable to call out because of his parched throat but he managed to grab a trailing rope and pull himself on board.

The noise disturbed Lindsay Schotten, owner of the yacht, who had been asleep below. He hurried up on deck to see the boy drinking from a bottle of water. Susan Brecker, Schotten’s common law wife who had also been below made the following statement at the coroner’s inquiry:

“We woke to hear this scrambling noise above us and we wondered what in the world it could be. We had been becalmed for several days and it had been so quiet all that time. Lindsay rushed straight up on deck and I could hear him talking to someone.

“The boy could barely talk but he just managed to explain what had happened to his parents and their boat. Then I couldn’t believe what I heard Lindsay say. I knew from bitter experience that he could be a complete so-and-so, but I never thought I’d ever hear anything like this from him.

“When I heard this I stuck my head up through the hatch and called, ‘Lindsay!’ The boy had sort of curled up on the deck and was whimpering, but Lindsay just turned to me and shouted, ‘You get below and stay out of this!’

“And I did, I’m deeply ashamed to admit. I could hear Lindsay saying something like, ‘This is my private property and you don’t have my permission to be on this boat. Get off!’

“Of course the boy didn’t want to get off the boat and back into the water so I heard Lindsay saying angrily, ‘Let go, let go!’ and after a bit of a scuffle there was a big splash. I peaked out through a porthole and I could see Lindsay holding him away from the yacht with a paddle. The boy didn’t have the life preserver on anymore so it was only a couple of minutes and he was gone.

“Why did Lindsay do it? Well it wasn’t because we didn’t have enough food. Lindsay just has these strong views about protecting his own private property. This boy had arrived uninvited and Lindsay didn’t want him to stay, so, that was it.

“Why didn’t I do more to intervene? I guess I was afraid of being called a trespasser too.”

Were either Rupert Staggs or Lindsay Schotten guilty of any wrong-doing?

Staggs openly admitted to the taking of the life of baby Lydia. In his defence he argued that his action was permissible in view of the fact that the young child was completely dependent on him.

Not only did Staggs have to provide her with food and water he had to carry her around constantly in order to prevent her being killed by scorpions. Staggs readily acknowledged that he had fully expected this situation would be alleviated some months in the future, but even so he did not believe he should have to take responsibility for keeping the child alive until that time arrived. He decided in fact that looking after her was too much of a burden for himself so he ended Lydia’s life.

Schotten did not directly kill Aaron Sampsen but his actions of forcing him off the boat and preventing him from climbing aboard again indisputably led to Aaron’s death by drowning. Schotten asserted that by virtue of being the owner of the boat, which he was, he had the right to say who could or could not remain upon his property. He chose, despite there being plenty of food on board, to evict Sampsen from the boat even though it would have been completely evident to him that by doing so Sampsen’s death was assured.

Would it make any difference in an assessment of whether these men were guilty of wrong-doing if it so-happened that the child in each of the case studies had been the daughter and son respectively of Staggs and Schotten? Would it change anything if the scenarios were identical except if it were the mothers of these children who had brought about the childrens’ deaths rather than unrelated men?

One reason that is given at times for justifying the act of abortion is that because the unborn child is completely dependent on the mother, the mother thereby has the right to end that child’s life if they so decide. Another justification that is used is to argue that the mother’s body is her own private property and thus the child in the womb is in effect a trespasser. If the woman should want to evict the ‘trespasser’ she should be allowed to choose to do so, so the argument goes.

Did Staggs and/or Schotten act wrongly? While these case studies are fictional, few would want to try and defend the actions of either of these men which resulted in the deaths of young children, should they have actually occurred.

It would not make any difference either if it had been the deaths of their own children that these men had brought about. Probably that would cause us to regard their actions as being even more heinous, if possible, if that were the case. And if it were the children’s mothers who had brought about the childrens’ deaths in those circumstances that would be too much altogether.

Are arguments based upon dependency and private property sustainable therefore as attempts to justify abortion?

(And was Susan Brecker in the wrong because she failed to try and prevent Aaron Sampsen’s death?)

Editor’s Note: This article was originally posted at Protect Life and is reprinted here with permission.