The video has already been viewed over 4 million times (at the time of this article’s publication), with hearts and minds being changed. Some, however, are throwing out common misconceptions on D and E abortion. Let’s discuss.

First of all, watch the video. Even if it were “rare” that babies were having their legs and arms torn off while they are still alive – or killed in any way – would that make it okay?

But let’s discuss that supposed “rarity.” The Centers for Disease Control reports that “The percentage of abortions performed by curettage at >13 weeks’ gestation (D&E) increased from 32% in 1974 (the first year for which these data were available) to 96% in 2002.” It is used this commonly, even though the World Health Organization also reports women’s “cervical injury is more frequent with D&E in the second trimester.”

According to the Guttmacher Institute – originally the research arm of Planned Parenthood – 9.8% of abortions in the U.S. are performed from 13-20 weeks. D&E is the most common abortion method employed in this time period, and Planned Parenthood widely advertises the procedure on its site, naming it when asked to explain in-clinic abortions. Additionally, some abortionists use this method at 12 weeks. Over 25% of abortions are committed between 9-12 weeks of pregnancy. And, D&Es are also committed up to 24 weeks. Abortions after 21 weeks make up approximately 1.2% of abortions.

Putting all those numbers together, it is easy to see that D and E abortion makes up at least 10% of abortions in the United States every year. Since over 1 million abortions are committed in the U.S. annually, this means over 100,000 babies are subjected to brutal D&E abortions every year.

Every ten years, roughly 1 million babies suffer by being pulled apart limb by limb until their skulls are crushed, or until some bleed to death and die. 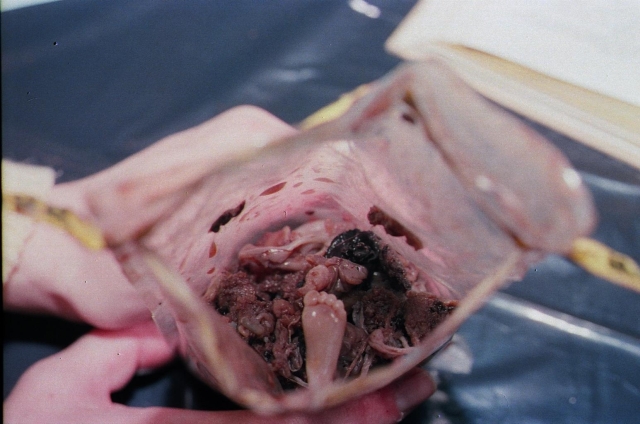 This statement has no basis in fact. First, the “emergency cases” people speak of – life of the mother – are quite rare. When they do happen, they commonly occur in the third trimester (long after viability, which occurs between 22 and 24 weeks). This is a point in time when babies can nearly always be delivered alive and put in the NICU instead of aborted and delivered dead. When late-term “emergency cases” occur, the baby must be delivered to save the mother’s life. The question is whether the baby should be delivered dead or alive; the answer is self-evident.

Over 1,000 medical experts confirm that abortion is not medically necessary to save the life of the mother. Even After performing 20,000 abortions, Don Sloan – who continued to perform them – wrote:

“If a woman with a serious illness – heart disease, say, or diabetes – gets pregnant, the abortion procedure may be as dangerous for her as going through pregnancy … with diseases like lupus, multiple sclerosis, even breast cancer, the chance that pregnancy will make the disease worse is no greater that the chance that the disease will either stay the same or improve. And medical technology has advanced to a point where even women with diabetes and kidney disease can be seen through a pregnancy safely by a doctor who knows what he’s doing. We’ve come a long way since my mother’s time….The idea of abortion to save the mothers’ life is something that people cling to…but medically speaking, it probably doesn’t exist. It’s a real stretch of our thinking.”

Dr. Anthony Levatino explains in the video below why abortions are not medically necessary:

That’s 54% of abortions in the second trimester right there. Babies in late term abortions are usually viable and could survive outside the womb if they were delivered alive.”Additional survey studies conclude that “late-term [after 20 weeks] abortion patients have confirmed that most late-term abortions are performed because of a delay in pregnancy diagnosis and for reasons similar to those given by first-trimester abortion patients:  financial stressors, relationship problems, education concerns or parenting challenges.”

A study published by the Guttmacher Institute recently admitted that “data suggests that most women seeking later terminations are not doing so for reasons of fetal anomaly or life endangerment.” Of course, fetal abnormalities do not make abortion just or humane. A child with disabilities is not deserving of a purposeful, intentional death – whether it is done through ripping limbs apart, a shot of poison to the heart, or starvation after birth. Suffering and pain do not strip value or dignity from life, and a strong, healthy person should never be in the position to end the life of a weaker human being who has no say.

68% had no pregnancy symptoms

58% Didn’t confirm the pregnancy until the second trimester

30% had difficulty deciding on abortion

In this study, not one case of abortion for health reasons was documented. Read more about how second trimester and late-term abortions are almost always elective in the article, “Why Do Women Get Late-Term Abortions?” by Sarah Terzo

Misconception #3: Babies are not alive during D and E abortion.

The video has been advised on and reviewed by medical professionals including practicing OB/GYNs and former abortionists, which confirms the accuracy with which the procedure was depicted.

Dr. Levatino describes that the preborn child is still alive and even explains that children at certain gestations feel the pain of the procedure.

While some abortionists inject digoxin, which kills the preborn child prior to performing a D&E, that is more common for third trimester abortions. A video with Dr. Levatino explaining the use of this method can be viewed below.

The National Abortion Federation (NAF) describes, in detail, how to perform a D&E abortion. Their instructions include that ultrasound guidance be used “in cases that require a considerable degree of force to remove fetal parts.” And, their instructions are completely absent of any description of how to kill the child other than by “grasping a fetal part” and then to “withdraw the forceps,” fetal part attached. (See Cassing Hammond MD, and Stephen Chasen MD, “Dilation and Evacuation,” Management of Unintended and Abnormal Pregnancy. Ed. Paul, Lichtenberg, Borgatta, Grimes, Stubblefield and Creinin. (Wiley-Blackwell, 2009), 157.)

Warren Hern, who the NAF praises as an “American innovator” in the D and E abortion procedure, similarly instructs that abortionists end the child’s life by pulling him or her to pieces.

Carhart agreed that “[w]hen you pull out a piece of the fetus, let’s say, an arm or a leg and remove that, at the time just prior to removal of the portion of the fetus, … the fetus [is] alive.” Dr. Carhart has observed fetal heartbeat via ultrasound with “extensive parts of the fetus removed,” and testified that mere dismemberment of a limb does not always cause death because he knows of a physician who removed the arm of a fetus only to have the fetus go on to be born “as a living child with one arm.”