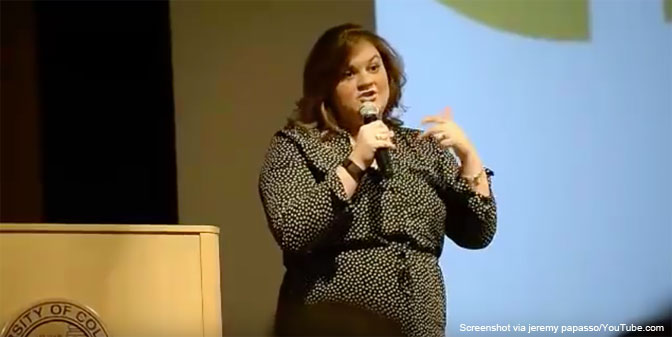 A recent speech by pro-life speaker Abby Johnson at the University of Colorado-Boulder would not have happened unless Alliance Defending Freedom intervened to halt pro-abortion discrimination by the student government.

Student-sponsored events such as guest speeches are funded at CU-Boulder by the student government’s Cultural Events board. When the campus’s Students for Life chapter applied for a grant to bring in Johnson, the board asked SFL whether they could find a speaker willing to discuss abortion “without attacking the organization of Planned Parenthood” or who could provide “an educational perspective” — despite the fact that as a former Planned Parenthood facility director, Johnson possesses detailed firsthand knowledge of the issue and organization.

SFL answered the questions, but the board then denied the request, claiming she “will not provide an unbiased view on pro-life issues.” Further, the Board did not name a separate entity to which SFL could appeal their decision.

So SFL got in touch with Alliance Defending Freedom, who found that the Cultural Events board had no problem previously funding a variety of controversial figures, including Communist leader and alleged domestic terrorist Angela Davis, transgender activist Janet Mock, and illegal-immigration activist Jose Antonio Vargas, without requesting that different speakers be brought in to balance their positions.

ADF then wrote to CU-Boulder administrators to inform them that the Cultural Events board was engaging in viewpoint discrimination and request clarification. The board then reversed itself, asking SFL only content-neutral questions and agreeing to 98 percent of their funding request. Johnson’s speech took place on April 11, part of which can be viewed below: