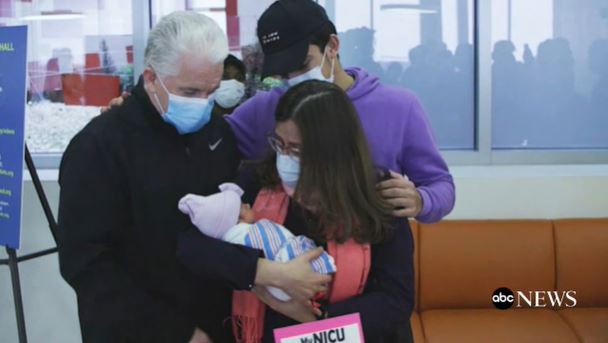 Iris Nolasco has finally been reunited with her newborn daughter. The two were separated amid Nolasco’s diagnosis with COVID-19, and subsequent emergency c-section, for 25 days.

According to ABC News, on March 15 Nolasco began experiencing body aches and headaches. Thirty weeks pregnant, she hoped that it was all in her head, and tried to ignore the symptoms. But then a cough developed — and worsened. She was given antibiotics for sinusitis and was tested for COVID-19. The test came back positive.

Self-isolating at home from her two sons and her fiancé, Nolasco’s condition began to worsen, and she could hardly breathe, let alone speak. Doctors decided to perform an emergency C-section on March 27 to try and save both mother and child.

“I just prayed to God to protect my baby,” she told ABC News.

READ: Premature baby girl recovers from COVID-19: ‘She’s our rainbow in the storm’

Nolasco feared death as she was put under anesthesia before the surgery, but remembers hearing her baby girl, who she named Isabella Michelle, crying as she was taken quickly away to the NICU. Nolasco didn’t get to hold her. Only able to speak with her fiancé over the phone, she said he was still fearful she would die. “He was saying goodbye to me like, ‘I love you. I’m not ready to lose you.’ It’s just hard,” she said.

As she began to recover from both the C-section and COVID-19, doctors installed a camera that allowed her to check in on her baby at any time. On April 2, she was released from the hospital, but it would still be weeks until she was able to meet Isabella. On Tuesday, that dream finally became a reality.

Mother and daughter were reunited at Maimonides Medical Center in Brooklyn, New York with great celebration. Isabella was wheeled to her mother in a bassinet with the sign “Maimonides NICU Graduate.” Hospital staff clapped as Nolasco saw her baby for the first time.

“My little baby… I know she’s giving me a smile, I think,” Nolasco said during the emotional moment. She thanked the staff for taking such good care of her daughter.

“We’ve been waiting too long,” she said. “I knew that she was in good hands but the pain, missing her, wanting to hold her, you can’t explain how much this hurts.”

As other pregnant women around the world worry about their own health and the health of their babies during the coronavirus pandemic, it’s important to follow social distancing guidelines, and keep up-to-date on the latest recommendations for pregnant women.

“You don’t feel like it’s gonna touch you,” she said of contracting COVID-19. “You never think that it’s gonna happen to you. It’s hard going through this. But now this is a victory. … This is a miracle. Think God’s time is perfect. There’s always a reason for things to happen. It’s hard to accept it but that’s how it is.”