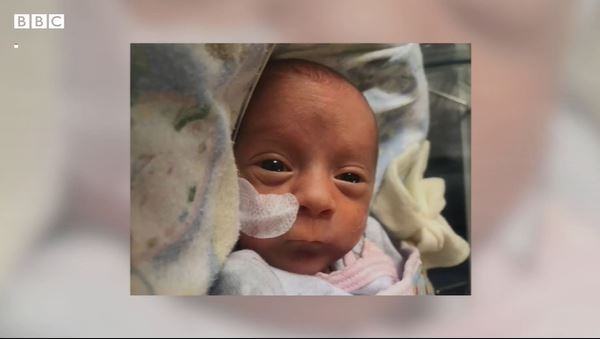 A premature baby girl in Scotland, who is thought to be the country’s youngest coronavirus patient, is recovering from the virus after contracting it at just three weeks old, according to Fox News.

Baby Peyton was born eight weeks premature on March 26 by emergency C-section after her mother Tracy Maguire suffered from pre-eclampsia, a dangerous high-blood-pressure complication that can occur in pregnancy. The condition can be fatal for mother and child if not treated by delivering the baby in order to save both.

Peyton developed a sniffle and slight cough, and the medical team at University Hospital Wishaw decided to test her for a variety of viruses, including COVID-19. The test, said her mother, was one of the “worst things” she’s had to watch. “It was the first time I’d seen my baby cry tears,” she told the BBC. “I held her, I was crying and we were just trying to get each other through the situation.”

On April 15, Maguire and her husband Adrian learned that Peyton tested positive for the virus. “They said, ‘she’s fine, don’t panic – but she has tested positive for coronavirus,” said Maguire. “I think the doctor was trying to keep me calm but I was sobbing. As much as she was fine I thought at what point was she with the virus? How is she fighting against it when she’s so wee? It was just the unknown.”

Peyton received steroids to help strengthen her lungs and fight the virus, but her parents were told they must go home and isolate for 14 days away from their new baby. Maguire begged the doctors to let her stay with her daughter.

READ: Her abortion was canceled because of COVID-19. Then a pro-life group stepped in.

“I was pleading on the phone with the doctor saying I don’t want to be away from her,” she explained. “As much as everyone was looking after her, I’m her mum. Even if it was the cold, I’d want to be there with her.” Doctors decided to allow Maguire to stay with her daughter, while her husband self-isolated at home. After 14 days were over, he was able to return to see his wife and daughter.

Both Peyton and her mother were discharged from the hospital on Monday, April 20, with great gratitude to the hospital staff. “It’s spectacular, you’ll never understand how grateful you can be to people,” said Maguire.

Now that the family is home together, they are excited to eventually have her meet her grandparents once the lockdowns for the pandemic are lifted. “Literally had the most rocky start,” said Maguire. “It doesn’t’ mean that you can’t have a positive outcome and she’s basically our rainbow in the storm that is coronavirus.”