People with disabilities are not often valued in our society. They’re demeaned as burdens or drains on taxpayers. And heaven forbid if a child is diagnosed with some kind of disability during pregnancy – even if the disability isn’t life-threatening, that child’s life is likely to be taken by his parents, simply because his life might consist of some measure of hardship.

An Australian couple chose to abort their baby at 28 weeks for just this reason: their child was diagnosed with nothing more than a cleft hand, and they thought that the baby might have a “hard” life.

… “I grew up with many people who were disabled, and… there was discrimination,” she said. “I didn’t want my child to be discriminated against. The problem is… obvious because it is the fingers, and I think the child would have a very hard life.”

… After going through the termination and delivery of the foetus, Frank and Cindy said they feel sad but relieved.

“It felt very inhumane, to be honest,” Frank said. “We were being told that our only option was to give birth to a baby that we did not wish to give birth to at all. We felt we have been forgotten and abandoned through the political and judicial uncertainty of the abortion laws”. 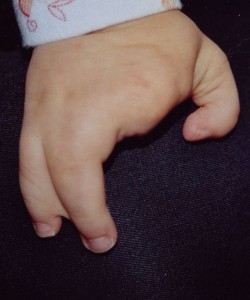 Cleft hand of a one-year-old. This is what the Australian parents thought was worthy of death.

The disability in question was not life-threatening. At 28 weeks, the baby could have survived outside the womb. And there are surgical treatments available for a baby born with a cleft hand.

But none of that mattered – this child was robbed of life, because the mother thought the baby would have a hard life. Because clearly, if a child might suffer even the slightest hardship, it’s better for him not to live at all. Right?

Besides, only people with disabilities have hard lives. Everyone else, it’s totally smooth sailing, no hardship at all. And you can only ever be born with a disability. It’s not like people can develop them later in life, from disease or a car accident or something.

So clearly, unborn children with disabilities just need to be killed. Don’t want them having hard lives or anything.

This idea that a child who is anything short of perfect should be done away with is repulsive and despicable, and yet we continue to perpetuate the falsehood that a life that will not be perfect and pain-free is not worth living. The “kinder” option promoted is killing your child.

Yet the problem is, everyone has to endure hardship or discrimination or pain. It’s also profoundly arrogant to think that we can decide for someone else whether or not his life is worth living. We don’t get to make those decisions for someone else.

In addition to that, it is extremely insulting to people with disabilities to publicly proclaim that their lives are not worth living. Because why? They don’t fit an extremely narrow worldview of what a fulfilling life is supposed to be?

People with disabilities, from the minor to the extreme, can and do lead valuable, fulfilling, worthwhile lives. They have inherent worth and dignity, just like all the rest of us – and people like this couple, who would casually snuff their child’s life out because it didn’t meet their standards of perfection, might be able to figure that out if they  took five minutes to actually talk to a person with a disability.

Subjecting an unborn child to a late-term abortion, which is particularly cruel, painful, and inhumane – just because he has a disability (in this case, a highly correctable one) – is sickening, immoral, and extremely wrong.