Cosmopolitan Magazine, recently in the news again for being dropped from checkout stands by Walmart, helped to push the sexual revolution of the 1960s. It did so by creating a “persona” of the perfect woman it labeled the “Cosmo Girl.” In her book, “Subverted: How I helped the Sexual Revolution Hijack the Women’s Movement,” author Sue Ellen Browder claims that the Cosmo Girl was a “mask the single girl, lonely and alone in the world, could put on to turn herself into the object of a man’s sexual fantasies.” Browder knows this well; she worked for Cosmopolitan Magazine under the direction of its editor, Helen Gurley Brown. 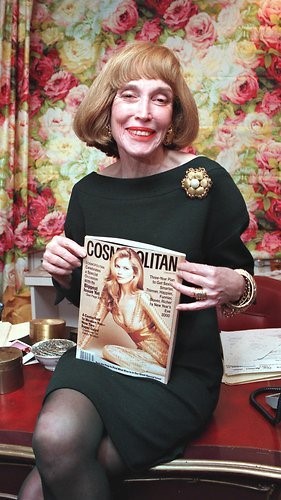 The Cosmo Girl was “an illusion”

Helen Gurley Brown took over Cosmopolitan Magazine in 1965, when the magazine’s circulation was falling. A report by the New York Times detailed the transition:

A secretary-turned-advertising-copywriter, Mrs. Brown first told a sexually somnolent America that single women had lives filled with work, play, and love in her 1962 best-selling book, ”Sex and the Single Girl.” She and her husband, David Brown, the film producer, then parlayed the book into a magazine proposal, which they took to Hearst Magazines. The publishing company gave her Cosmopolitan, a fading 79-year-old publication that had once carried stories by the likes of W. Somerset Maugham.

According to Browder, Brown’s philosophy was, “hard work and sex without the kids will set you free.”

“If you entrusted yourself to Helen’s lifestyle teachings (as many young women did and still do), you’d soon come to believe the way for a smart woman to be free and to succeed in her career and her life was to (1) work hard; (2) take the Pill or use some other contraceptive; (3) if the contraceptive failed, get an abortion,” Browder explains in “Subverted.”

According to Browder, there was no real Cosmo Girl. “She was mostly a product of Helen’s clever imagination, a marketing fairytale,” Browder writes. 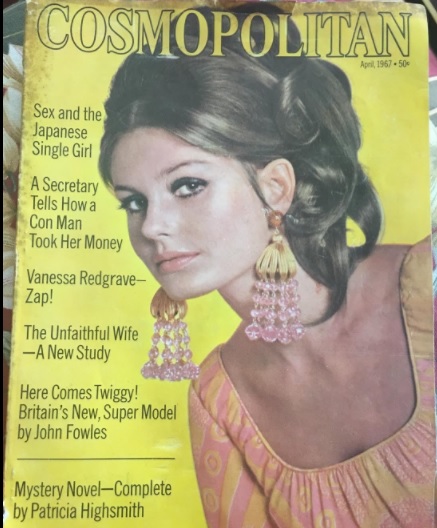 “It was all an illusion,” Browder told Live Action president Lila Rose.

“She worked hard, bought lavishly from the pharmaceutical, medical, beauty, fashion, and travel industries, and to top it off, she did not push for all those pricey, bothersome extras like family tax breaks, maternity leave, shorter work weeks, and more flexible work arrangements,” said Browder.

Though Helen Gurley Brown labeled herself a “devout feminist,” other feminists of her day strongly disputed this. Brown wanted to work for Playboy founder, Hugh Hefner, and once suggested that women should try to please men: “If you want a man in your life you have to be nice to them….”

In an interview after Brown’s death in 2012, Hefner told the Hollywood Reporter that Brown had approached him for a job before joining Cosmo. “She wanted to do a female version of Playboy,” Hefner stated. “In the early days, they even had a little symbol like our bunny, a pussycat that appeared at the end of every article. In a parody tribute to Playboy, she even did a nude [April 1972] centerfold with Burt Reynolds.”

“When she founded Cosmo, her views on sexuality and the sexual behavior of unmarried women were radical and the same as mine. In terms of male and female relationships, our philosophy was very similar,” Hefner added. But not all feminists agreed with Brown’s version of women.

In fact, feminist Betty Friedan, who authored “The Feminine Mystique” and went on to help found the National Organization for Women (NOW) as well as NARAL, called Cosmopolitan in 1967, “quite obscene and horrible” and “an immature teen-age-level sexual fantasy.” 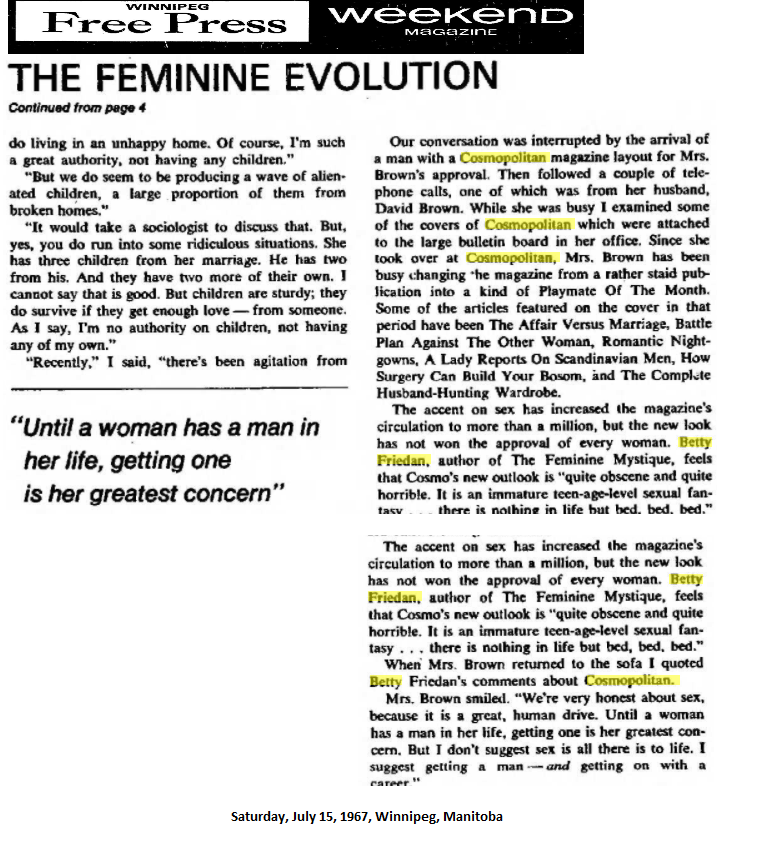 “As the mother of the women’s movement, Betty [Friedan] hoped to broaden and deepen women’s lives,” Browder writes in “Subverted.” And she agreed with Friedan’s assessment of Cosmopolitan. “We created this fantasy world, the Cosmo Girl, at least in the beginning, before a lot of women began to buy into it; the Cosmo Girl was just a sexual fantasy…. “You never saw a mother in the magazine, you never saw a child in the magazine,” Browder pointed out.

Friedan once said, “Women are the people who give birth to children, and that is a necessary value in society…. You want a feminism that includes women who have children and want children because that’s the majority of women.”

Tragically, Friedan, under the influence of pro-abortion writer Larry Lader, would eventually embrace abortion as part of her women’s movement only to return to her original focus later in life — that the family was important.

In promoting her book, “Second Stage,” Friedan called for her movement to “stop overemphasizing abortion rights and reaffirm the importance of family.” But the damage was done.

Helen Gurley Brown’s vision inside her sexual revolution was much different. In describing the “Cosmo Girl,” the NYT revealed that Brown concentrated on her looks, not on her activities or aspirations. ”She has always been sexy, slender and bosomy,” Brown allegedly said.

Despite the internal conflict, once abortion was adopted by Friedan, the two movements essentially merged. In fact, the Cosmopolitan editor joined with Friedan’s NARAL to push abortion politically. In 1974, Brown signed a NARAL-initiated telegram sent to Democrat Senator Birch Bayh, the Chairman of the Senate Subcommittee on Constitutional Amendments, which was considering legislation to overturn the recent Supreme Court decision which legalized abortion.

The telegram mouthed the same lies that Bernard Nathanson, a founder of NARAL, helped to create by claiming that reversing Roe would cause many women and especially poor women to “suffer at the hands of back alley abortionists.” Live Action News previously documented how NARAL’s claim that hundreds of thousands of women died from illegal abortion was fabricated.

Although NARAL and Brown were objecting to the fact that those testifying before the committee were all men, one of the men who testified, Dr. John D. Biggers of Harvard University Medical School in Boston, sided with NARAL by claiming that legally protecting unborn babies (something that was in effect just a year earlier) could have profound implications on the behavior of sexually active women: “If such legislation is written, every woman who is sexually active will have to assume she is pregnant and modify her behavior in a suitable way.”

That statement alone revealed why Friedan’s women’s movement and Helen Gurley Brown’s sexual revolution movement had to join under the umbrella of abortion to survive.

Cosmo’s objectification of women and friendship with the abortion industry

After Brown’s death in 2012, writer Rhiannon Lucy Cosslett chastised Cosmo Girl as “a brief hiccup in what has otherwise been a longstanding agenda of sexual objectification.” She then called the modern Cosmopolitan Magazine “hopelessly outdated.” Victoria Hearst, the granddaughter of William Randolph Hearst, claims that Brown turned “a family magazine into a sex rag.” 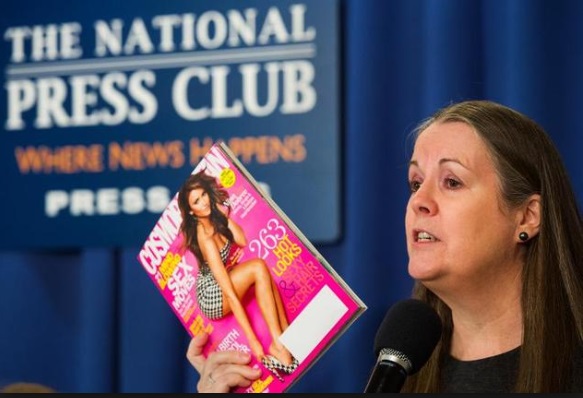 In 2015, according to WorldNet Daily, Hearst “launched a campaign against Cosmopolitan magazine which she describes as pornographic. Working with the National Center on Sexual Exploitation, Hearst announced the CosmoHarmsMinors.com website to provide information about the magazine.” She stated that the magazine had declined to become a mere “‘how-to’ sex guide, glamorizing… public or violent sex acts in nearly all their issues,” which would be “deemed pornographic” according to “most states’ material harmful to minors laws.”

An interview with Hearst after the release can be viewed here. 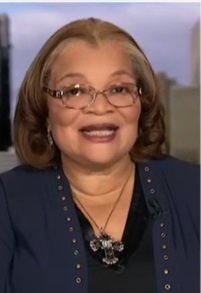 Alveda King spoke out against Cosmopolitan

Pro-life spokesperson Dr. Alveda King, niece of civil rights leader Martin Luther King, Jr., endorsed Hearst’s effort, claiming, according to Breitbart, that Cosmopolitan’s content helps “line the pockets of the abortion industry” and that “Planned Parenthood is joining with Cosmo” to “lead that girl into an abortion.”

“[W]hen a young girl reads Cosmo and sees all this supercharged sexuality, buys into the sexual liberty of the day, and involves herself in those types of activities,” she continued, “then the next natural force – or unnatural, depending on how you look at it – would be, ‘Well, I’m pregnant now. I just wanted to have fun; I didn’t want to have a baby.’”

“And then Planned Parenthood is joining Cosmo right there to lead that girl into an abortion,” King added.

Cosmo continues to promote abortion and supports Planned Parenthood, known for covering up child sexual abuse. Today, according to the Media Research Center, Cosmopolitan, which describes itself as a “bible for fun, fearless females,” influencing more than 18 million readers a month, offers plenty to criticize. Newsbusters’ Katie Yoder discussed a Dec. 8, 2014 piece by Jill Filipovic, Cosmopolitan’s senior political writer at that time. Her piece featured Planned Parenthood president Cecile Richards on “where the pro-choice movement is headed next year.” Yoder also noted that “abortion-giant Planned Parenthood bestowed the ‘Excellence in Media Award‘ to the magazine” that same year. 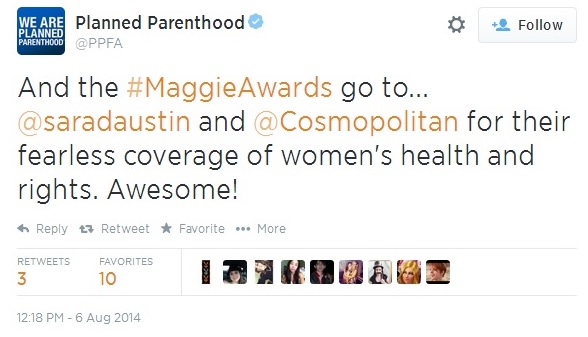 In response, Filipovic tweeted how proud she was to receive the “Maggie Award.” 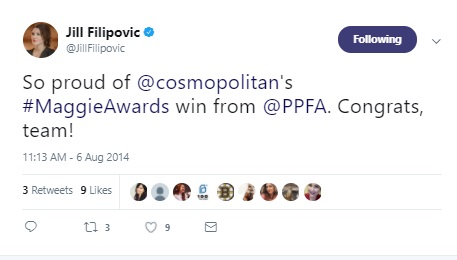 Planned Parenthood’s top award is named after its founder, Margaret Sanger, known for her advocacy for the eugenics movement. Sanger also admitted meeting with the Ku Klux Klan, but that doesn’t seem to bother the abortion corporation or so-called media outlets, like Cosmo, which praise both Sanger and Planned Parenthood.

Cosmo’s newest Editor in Chief, Michele Promaulayko, was announced in 2016. From 2000 to 2008, Promaulayko had previously served as executive editor of Cosmopolitan. She was also the former editor in chief of  Yahoo Health and Women’s Health. Despite Margaret Sanger’s racist history, Promaulayko currently boasts on her LinkedIn page that “in 2013 Women’s Health won the prestigious Maggie Award from Planned Parenthood.” 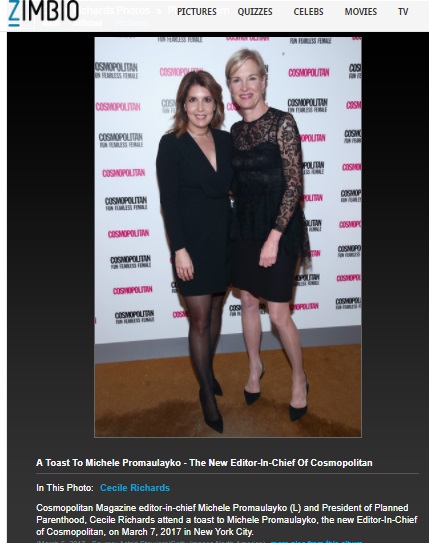 Clearly, Cosmopolitan magazine’s sexual revolution and promotion of abortion continues to this day.