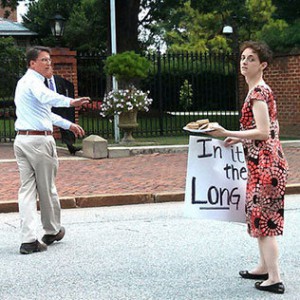 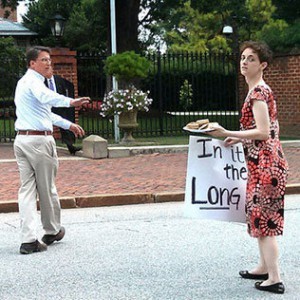 Abortion advocates are mad about a pro-life bill in North Carolina that was just signed into law by Governor Pat McCrory. It hasn’t reached Texas levels of outrage, but pro-aborts have been protesting nevertheless. In fact, they’ve been protesting right in front of the Executive Mansion. Governor McCrory’s response? He served the protestors some cookies.

McCrory was flanked by four security guards as he came out of the mansion gates. Before stepping onto common ground with the protesters – he went as far as the middle of the street between his mansion and the vigil – McCrory pointed directly at Jamie Sohn, a Chapel Hill resident.

“I was like, ‘Me?’ and he nodded,” she said during an interview shortly after.

The security guards stopped incoming traffic. Sohn walked out into the street to meet McCrory.

The protestors were pretty stunned, to say the least. They returned the cookies underneath the mansion’s gate with a note attached that read, “will take women’s health over cookies”, because women’s health is entirely wrapped up in abortion and nothing else — so any limitations on abortion mean that women have no health, or something. They then started a fairly lame chant, and ultimately ended the protest almost eight hours early.

The protestors were, unsurprisingly, furious. Because how dare Governor McCrory do something nice for them? Did he not get the message that political disagreements are supposed to equal sheer hatred?

Amanda Marcotte was among those who were outrageously outraged over CookieGate, because, patriarchy!

But McCrory has a plan to make it all OK: cookies! Yes, the governor came out of his mansion to greet pro-choice protesters, who were dressed in ’50s-era fashions to represent the era that Republicans want to return women to, and gave them a bunch of cookies.

… If McCrory thought the gesture would make him look like a generous sort who reaches out to people who disagree, then it backfired, and not just because he avoided actually meeting with opponents about the law before he signed it. Next to sandwiches, cookies are probably the most potent edible symbol of the belief that women’s role is to shut up, give up their ambitions, and return to the kitchen. While it’s unlikely that McCrory was deliberately trying to tell the protesters to know their place, that’s how the gesture reads. After Rick Perry’s mansplaining tour of Texas, it’s hard to tell anymore if Republican governors have given up even trying to pretend they respect the female members of the opposition. At this rate, the next Republican governor to sign an anti-choice bill is going to greet protestors with a basketful of aprons emblazoned with anti-choice slogans.

Ah, yes. That classic symbol of keeping women down: cookies. It was especially patriarchal how he, a man, served the protestors, mostly women, a plateful of cookies. This makes perfect sense, because cookies are classic symbols of oppression, right? They’re not actually tasty treats enjoyed by most normal human beings.

Of course, when you actually think about it, what did he do that was so offensive? He didn’t ask them to leave. He didn’t make them leave. He said or did nothing rude. He brought them some cookies, said God bless you, and left. He did something nice, which befuddled the pro-aborts so much that they could think of nothing else to do except pack up and leave. Apparently, you really can kill them with kindness.