Pro-choice activists often claim that late-term abortions are done only for the direst of reasons, and that abortions late in the second trimester are only committed due to risks to the mother’s life or a fatal condition in the baby. But an article in the Sacramento News Review, in which a reporter visited an abortion facility and interviewed workers there, reveals otherwise.

According to one abortion worker, Britta (no last name given): “It’s different every day.”

So the abortion workers at this facility have seen women come in for sex selection abortions. Other women have aborted because they didn’t know they were pregnant until late in their pregnancies, or because of changes in life circumstances. In these cases, both mother and baby were perfectly healthy. This is a far cry from the pro-abortion claim that all women who have abortions after 20 weeks are critically ill or pregnant with dying babies.

The article profiled a number of women who were having late-term abortions.

One, a 17-year-old named Leslie, came to the clinic just under the 24-week limit for a D&E abortion. A D&E is the most common method of abortion used in the second trimester. It consists of dilating the woman’s cervix with rods called laminaria which slowly stretch the opening of the uterus overnight. On the second day, the baby is dismembered with forceps and pulled out piece by piece. Dr. Anthony Levatino illustrates this procedure in a video for Live Action.

Here is a picture of the arm and foot of a baby dismembered by D&E at 20 weeks, four weeks younger than Leslie’s baby. 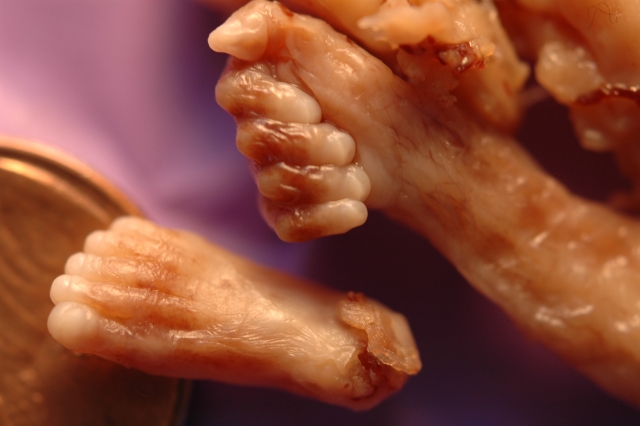 From Citizens for a Pro-Life Society

Although only 17, Leslie did not tell her parents she was pregnant and having an abortion. The author of the article quotes Leslie:

“I didn’t know how they’d respond,” said Leslie, explaining why she kept her pregnancy secret. She is still not sure why she took 23 weeks to make her decision, but her youth finally convinced her to abort. “I can’t take care of it,” she said. “I’m still in high school. Some [friends] told me to keep it, but …” Her voice trailed off.

Despite her seeming ambivalence, Leslie had her abortion. While her baby was being aborted, she held onto a little stuffed tiger for comfort.

The author also wrote about another woman having a second trimester abortion:

Leslie was one of two women getting late-term abortions at the clinic on a Friday in early January. The other was a mild-mannered IV drug user with hepatitis and an abusive boyfriend. She’d gone through counseling at the clinic early in her pregnancy and was so conflicted that she repeatedly canceled appointments and didn’t show up for the procedure until she was 18 weeks along.

This woman also seems ambivalent about having an abortion. She obviously has serious problems in her life, but it is unlikely that an abortion will improve her situation.

Studies have linked abortion with higher rates of substance abuse and depression. Women who have abortions are also more likely to seek psychiatric treatment and to commit suicide.

After committing her abortion, this abortion facility sent the woman struggling with substance abuse home to cope with her abortion on her own. They did not attempt to refer her to a rehab facility or help her with her underlying problems. All they did was kill her baby and send her on her way.

The article then mentions another woman who had an abortion because her child may have had Down syndrome. Her pregnancy had originally been wanted, but the medical risks of having a child with down syndrome convinced her to abort.

The article also profiles Vicki Simpson, who works at Planned Parenthood. In her case, the baby had catastrophic birth defects which would not allow the child to survive. Simpson had the option of carrying to term and giving birth to her baby naturally and spending time with the child before he or she passed away. Instead, she chose to abort by D&E.

The abortionist had offered her the possibility of inducing birth, so that she could hold and say goodbye to the baby. He warned her that with a D&E, “Chances are, you won’t want to see the fetus.” Indeed, seeing the body parts of her dismembered child would have been a traumatic experience.

While Simpson claimed not to regret her abortion, it was not easy for her, according to the article’s author:

Simpson recalls nothing about the procedure but remembers waking up feeling like dead weight and realizing where she was. “I started sobbing,” she said, “hyperventilating.”…

Simpson was depressed for a long time….

As a Planned Parenthood worker, Simpson supports women who have late-term abortions regardless of the reason.

Erin Greenough was another abortion worker who aborted a baby that would’ve had a disability. The article’s author says:

In her own case, Greenough chose to abort because her daughter was found to have a potentially fatal heart condition….

Greenough remembers the first question she was asked by her doctor: How are you with termination? Greenough’s decision was more complex than Simpson’s. Whereas Simpson’s child was fatally disfigured, a series of surgeries and an eventual heart transplant might have saved Greenough’s daughter, though she would have been severely handicapped….

Choosing not to take the chance that the baby would have a disability even if she survived, Greenough had an abortion. Her abortion was done by inducing labor prematurely. She does not regret the abortion, but says she wishes she’d spent more time with her baby’s body in order to say goodbye. She was shocked when she delivered her child.

“No one explained that she would be perfectly formed,” she said.

It’s impossible to know whether the knowledge of her baby’s level of development would’ve changed her mind about the abortion.

Another woman who worked in the abortion clinic, Tammy, also aborted a child diagnosed with a disability. At the time of her pregnancy, Tammy had a strong Christian faith. Her faith caused her to be uncertain about having the abortion.

As committed Christians, it was hard for Tammy and her husband to decide what to do; Tammy knew she had the medical knowledge to care for a disabled child, but she realized she couldn’t bear to go through with the birth of a child that might not survive. After wondering what was fair to the child and wondering if God would hate them, Tammy and her husband chose to terminate.

Her baby had hydrocephalus, a buildup of fluid in the brain. A shunt placed in the child’s brain could have allowed her child to live a normal life. However, there was still the risk of the baby would not survive, and Tammy did not want to put herself through the stress of not knowing.

Perhaps trying to justify her abortion, she now works in the abortion facility, helping other women have abortions. She still claims to be a Christian. According to the author:

Though it might seem surprising to find a dedicated Christian working in an abortion clinic, considering that so much national debate seems to fall along religious lines, Tammy doesn’t mind the incongruity. “Nobody really knows what God thinks,” she said.

“If it wasn’t OK,” said Tammy, “I would never have felt like it was OK. If I wasn’t supposed to be here, I wouldn’t be.”

Yet even healthy babies are killed in second trimester abortions. In Leslie’s case, her baby would have been born without any disabilities. Even though Leslie seemed unsure, the abortion workers committed her abortion and sent her home. Her parents were never made aware of the loss of their grandchild, or of the heavy burden their 17-year-old daughter would carry for the rest of her life.