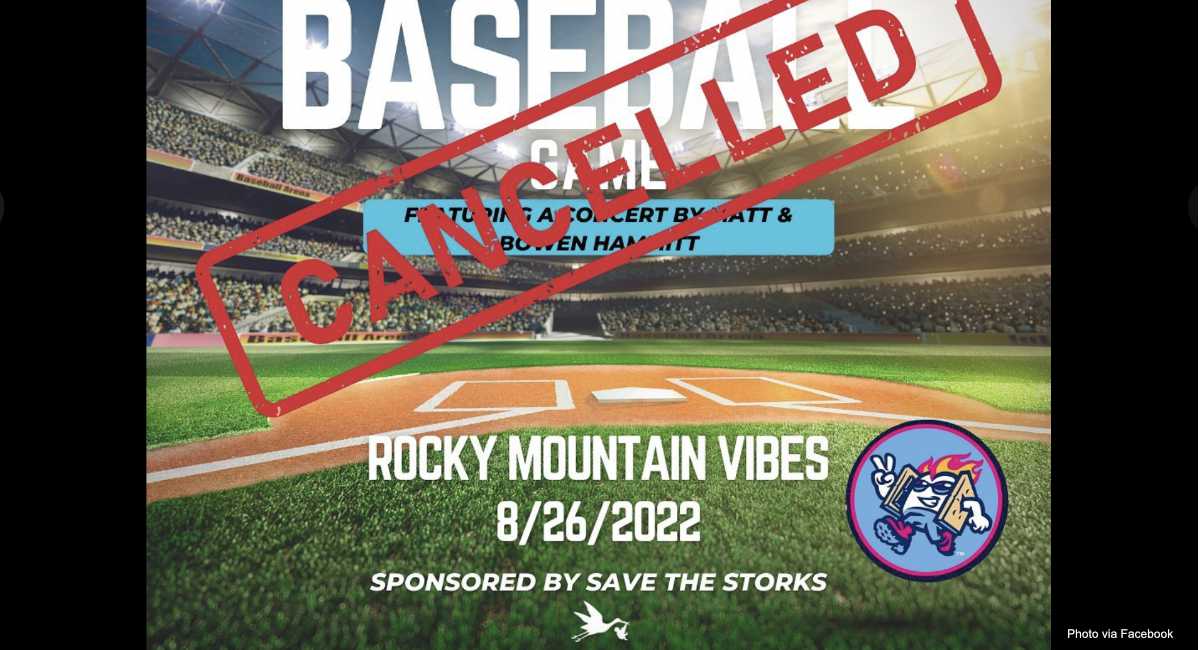 A family night sponsored by two Colorado pro-life organizations for a minor league baseball team was canceled just hours before the game was scheduled to start, and after the organizations had already spent thousands of dollars and expended extra time increasing ticket sales for the event.

The Rocky Mountain Vibes plays in the Pioneer League, which is an MLB Partner League. Save the Storks and Pikes Peak Citizens for Life sponsored a family night at UC Health Park, helping to sell over 3,000 tickets for the game.

According to Diane Ferraro, CEO of Save the Storks, the Vibes reached out to them regarding sponsorship. “So they were very aware of what we do and what we stand for,” she said in an interview with Live Action News. “Normally they’ll have 1,000 people at one of their games, and because we had been helping to promote it, they had over 3,000 tickets sold.”

Yet Ferraro said she was informed that team owners had been receiving calls from people who said they were canceling their season tickets over the pro-life sponsorships, though Ferraro believes there may be other reasons for the event’s cancellation. “We are a very pro-life area in Colorado Springs. Focus on the Family is here, Compassion International is here, there are five military bases here… Colorado Springs is very conservative, though the state is blue,” she said. “UC Health owns the stadium and we’ve heard they were a big part of the decision.”

In an update to their Facebook post, Save the Storks noted that they had been contacted by a UC Health representative “at approximately 4:30pm MST” who “stated that they were not one of the Vibes’ sponsors behind this decision. The information regarding the ‘main sponsor’s request and other sponsors’ was provided to us directly by the Vibes organization, which we believed to be a credible resource as they have been our main point of contact.” Save the Storks added, “We ask that you email jhathaway@vibesbaseball.com or visit the Vibes website to request a full refund. Please show your support of Save the Storks and Pikes Peak Citizens for Life by boycotting tonight’s game.”

Grammy-nominated singer and songwriter Matt Hammitt and his son, Bowen, who recently sang the National Anthem at a Detroit Tigers game, were also scheduled to sing at the event. Their invitations to perform were rescinded as well. Save the Storks’ Community Relations Manger, Luke Vercollone, had been scheduled to throw out the first pitch.

The Rocky Mountain Vibes provided a statement about the situation to Live Action News, saying they stand by their decision to abruptly cancel the event:

The Rocky Mountain Vibes today pulled out of a partnership with an organization that was scheduled to sponsor tonight’s Friday Night Fireworks show. While we value all our sponsors and ticket holders, they do not make decisions regarding the nature of our post game entertainment, or groups that come out to our stadium to raise awareness for their causes.

The Vibes made this decision after seeing the proposed assets from the partner in question because they felt that the partner would hinder the team’s mission in providing fun and affordable family entertainment. Any statement placing blame on any outside party for cancellation of tonight’s events is inaccurate.

The Vibes made this decision internally and stand by their choice.

Had the invitation not been rescinded at the last moment, Save the Storks would have been featured during the game, as well as Pikes Peak Citizens for Life and A Caring Pregnancy Center in Pueblo, which was going to bring their mobile pregnancy center unit so fans could step inside and learn about their mission to help women and children. All of that, was well as the Hammitts’ performance, was abruptly canceled.

“Matt Hammitt and his two sons were flying from Nashville,” said Ferraro. “We invested around $10,000 in [Friday’s] events in terms of giveaways and staff and flying people in. Bowen Hammitt was in tears when his dad had to explain to him why they were disinvited. Hospitals have been so good in saving his life… our hospital network kind of took this dream away from a little boy. He’s 12 years old.”

In April, Colorado Governor Jared Polis signed a bill into law making abortion a constitutional right within the state. Colorado already had no gestational restrictions on abortion, and this legislation further guaranteed that abortion would be legal at any time throughout pregnancy, for any reason.

“We are hoping to raise funds for a medical mobile unit,” Ferraro said. “It’s so hard for pregnancy centers to get traffic and so hard for us to compete with the $25 million donated to Rocky Mountain Planned Parenthood here.” This money was due to a record donation given to Planned Parenthood by Mackenzie Scott, the ex-wife of Amazon founder Jeff Bezos.

“It’s very hard for any pro-life ministry [in Colorado] to provide the services we need to. We’re trying to fight the good fight and let the world know that Colorado should be providing life-affirming services,” Ferraro continued. “Lives are being taken here up until birth, and we need to provide more life affirming options. It’s financially hard to compete with the extraordinary sums coming in to provide abortions. Women need the truth, and now them canceling this event is one more way they’re trying to suppress our mission.”

To help donate money towards a medical mobile unit, you can visit SaveTheStorks.com.

Editor’s Note: This post has been updated since its original publication.