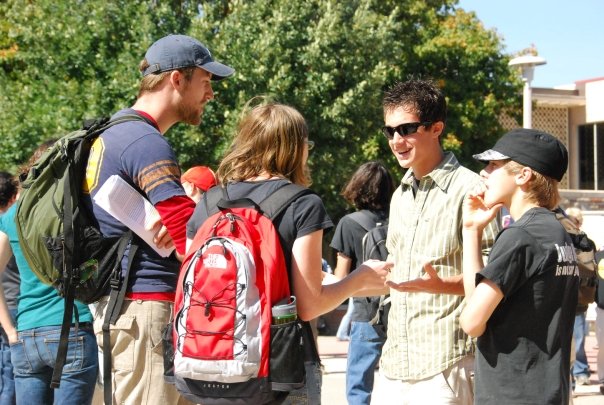 Josh Craddock has crammed a whole lot of life in twenty years.  Going to college and having a “normal” job isn’t enough for him.  While attending college in Manhattan, New York, he currently works for the World Development Coalition as a representative to the United Nations.

At three years old, Josh would set up his stuffed animals and preach to them from behind a make-shift laundry basket podium. Thankfully, he has since moved on from such captive audiences and now prefers to share ideas with people who can actually talk back.

Josh at the United Nations

Yes, Josh Craddock is all about sharing ideas. Not content to bask in the sunshine some find in simply making up their own minds, Josh is out to change the world – and to challenge what you think. He’s out to make it a better place, a safer place – for everyone.

Yes, Josh is a pro-life activist. I met him nearly four years ago, when he was participating in high school speech tournaments, sharpening the skills that would do him justice in the years to come.

So what exactly has Josh done so far in the pro-life movement? Well, he began in middle school by talking to college students on their campuses. He volunteered for Justice For All, an organization that, in his words, “teaches students how to dialogue about the issue of abortion and persuade peers.” Josh describes some of his other work in the movement:

I’ve also gone to home visits of abortionists on Holidays, to let neighbors know what the man next door does for a living and discourage other doctors from considering abortion practice. Since 2008, I’ve been active with the personhood movement by petitioning and campaigning for human life amendments in Florida and Colorado. During the Democratic National Convention, I helped display a world-record size sign on the side of a mountain in Denver that gave a pro-life message. Now I work to promote life and family at the United Nations through an international non-governmental organization in New York. Attending General Assembly debates, meeting with national delegates, partnering with other life organizations, and working together to lobby for life-affirming UN resolutions has shown me how the life-movement transcends national boundaries and is truly a global human rights campaign.

What, you might ask, would fuel the passion in such a young person’s heart? I asked Josh to explain his motivation. Why does he feel the need to speak out about the lives of the innocent instead of just keeping his beliefs personal?

Presenting a speech on pro-life strategy was what transformed my interest into a passion and led me to dedicate myself more fully to the cause. Being able to research the issue and speak to persuade others was not only an opportunity to ground myself in the opinions I developed, but also convinced me that I had a duty to speak out on behalf of the preborn.

In his free time (what may be left of it), Josh enjoys the mountains and health food. He is also all about developing new communication skills so that his message can be received by those around him. Josh isn’t one of those “in-your-face” people, one of those “typical” pro-lifers (who really aren’t typical at all), one of those “my way or the highway” types. No, Josh is committed to finding a way to speak his message in a way that people will receive.

And I’m convinced he wouldn’t call it his message, anyway. It’s the message of millions of tiny voices, crying out for justice and for life.

I asked Josh what his main motivation is for working on this issue as a young person. His response:

I think about what it would have been like if I, one of my siblings, or one of my friends had been aborted. It makes it deeply personal. One-third of my generation isn’t here today because of abortion and I can’t stop thinking about the great human rights tragedy there is before us. That’s why I’m so encouraged that young people my age are growing more and more attuned to the issue of abortion and are getting involved to stop it. It’s an inspiring attitude that shouts: “We’re the survivors and we have a duty to the victims to uphold human rights for all!”

Josh also gave recommendations for other young people – or really, anyone – who are committed to the movement but need advice. How do I act? What can I do? How can I learn? Josh highly recommends reading Why Pro-Life? by Randy Alcorn and Amazing Grace: William Wilberforce and the Heroic Campaign to End Slavery by Eric Metaxas. He also shares his thoughts:

The hardest part about advocacy is the initial impetus to act. Find what kindles your inspiration and then follow through. Giving a speech was my propulsion into heart-driven action, but it can be as simple as having a conversation with a friend or joining Justice For All at a college campus visit or high school training seminar. If there’s a pro-life club in your area, join it! If not, band together with a few friends and start one. Start small. You can begin by volunteering or fundraising for a Crisis Pregnancy Center, praying with 40 Days for Life, leafletting copies of Live Action’s “Advocate” in a public place, or hosting a movie night to show a pro-life film (Bella, October Baby, Maafa 21, and 180 are excellent choices). Whatever you do, you’re part of a movement and there is support for your goals. Seek out the support you need to get your project started and then follow through.

Josh and Ben at Colorado University

Be encouraged by the life of Josh Craddock. Be encouraged that no matter how young or how old you are, you can make a difference exactly where you are if you will only choose to act. Take the responsibility upon yourself. Stop the injustice. Stand up for life. Let one of Josh’s favorite personal experiences inspire you on to action: a three-and-a-half-hour conversation he had with a University of Colorado student. You never know which words you speak will be used to change or save a life! What matters is that you choose to speak them.

We started off talking about the exhibit that Justice For All brought to campus. He was pro-choice, but thought maybe abortion should be limited towards the end of the 2nd Trimester. After talking for a long time about the humanity of the unborn child and whether human rights apply equally to all people, we began to discuss even deeper issues. We talked about where morality comes from and what evidence there was for a Creator who is the author of morality and human rights. Ben was challenged on his most basic assumptions about life and our purpose. Even though I can’t say Ben changed his mind about God or even abortion, he was ready to consider ideas he had previously dismissed. We kept in touch a little bit after that conversation and I sincerely think something began to change in his life that day. I’m not sure where Ben is now, but I hope that our conversation left the same impact on him that it did upon me.