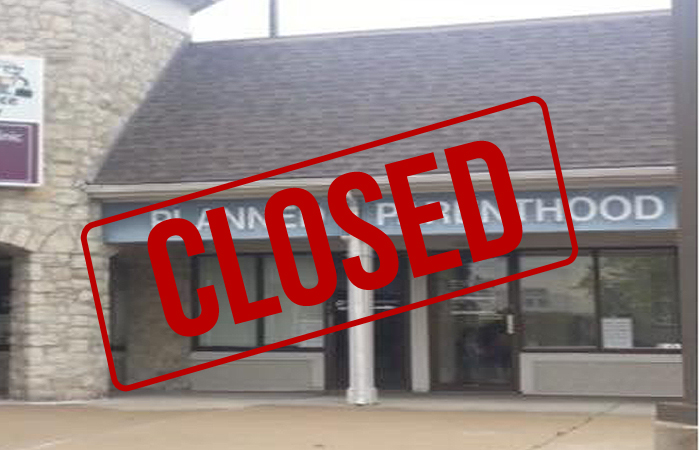 On Sunday, the Women’s Clinic became the only one with an active business, when the Grandview, MO, Planned Parenthood quietly shuttered for good. While the facility did not perform surgical abortions, it was an active feeder facility in the metropolitan Kansas City area that sent woman to its large facility in neighboring Overland Park, KS. It also provided the morning after pill.

CEO and President of Planned Parenthood of Kansas and Mid-Missouri, Laura McQuade, tried to downplay the closure as a small thing, saying, “We had a lot of patient overlap and we felt that by consolidating bricks and mortar – we’re bringing over the clinical staff to Overland Park – we can expand services to other health centers.”

However, local pro-lifers don’t see this closure as miniscule. Nick Stotzer was the leader of the Life Initiatives department at the International House of Prayer in Kansas City (IHOPKC) for the past two years. IHOPKC borders Grandview and has many of its facilities in the city, so the Life Initiatives department works in close partnership with the Women’s Clinic in Grandview. Stozer says:

“The closing of this Planned Parenthood is extremely significant for Grandview and the surrounding area. This particular PP would refer young women to the Kansas PP for surgical abortions, while also providing the morning after pill and other forms of contraceptives to young women.”

Stozer and his team used the common wall as a place of prayer. He says they prayed faithfully for years at both IHOPKC and the Women’s Clinic:

“We would lay hands on the common wall and pray for the PP to turn into a center for LIFE. For a solid year and half we prayed and saw more and more young women come to the Women’s Clinic instead of the Planned Parenthood.”

Stozer says that as time went on, they learned that “the numbers of women increased for the Women’s Clinic and decreased for the Planned Parenthood…It was like they just didn’t want to go in there anymore.”

But Stozer, while rejoicing, isn’t surprised. In addition to the many prayers, they “flooded the Women’s Clinic with volunteers and people to help teach classes.” He adds that “everyone in [the Women’s Clinic] was praying.” The Life Initiatives Department became actively involved with the pregnancy resource center, holding baby showers for the mothers who chose life and providing mentors for them. Their team put feet to their prayers, and Stozer says it made a difference.

“In my two-year tenure there, we helped to save about 2,000 babies with a message of love and hope in Jesus. Now, without that Planned Parenthood in business, it can be thousands more.”

The closing is also significant because of the demographic make up of the south Kansas City community. Grandview, MO, has less than 25,000 people, but 40.8 percent of the population is African-American, a prime market for Planned Parenthood.

Protecting Black Life reports that the, “2010 Census results reveal that Planned Parenthood is targeting minority neighborhoods.” Black Genocide also notes that 78 percent of Planned Parenthood clinics are in minority communities. According to the Guttmacher Institute, the black population accounts for 30 percent of abortions in America, though only accounting for 13.2 percent of the population currently, according to the Center for Disease Control.