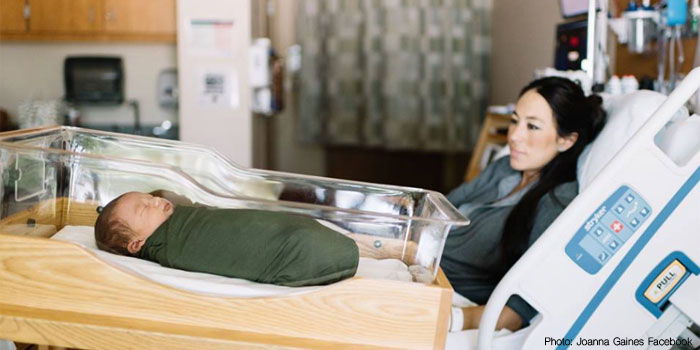 Saturday, Chip and Joanna Gaines, stars of the HGTV show “Fixer Upper,” announced the birth of their baby boy, Crew Gaines. The couple has four other children. In a Facebook post, the happy couple shared their joy with the world. “Our baby boy, Crew Gaines, is here and we couldn’t be more in love,” they wrote. “He made an unexpected (and speedy) entrance into the world two and a half weeks early – which is fitting given he was a sweet surprise from day one. Thank you for all your thoughts and prayers. We are so grateful.”

Photos taken shortly after the delivery of Baby Crew show Joanna with her son swaddled next to her, as well as photos of the family together, beaming and happy.

On Twitter, Joanna showed the excitement her other four children had for their newest sibling, waiting outside the door for their chance to meet the baby boy.

One of my favorite pics a friend showed me after Crew was born. They couldn’t wait to meet their new baby brother ❤️ pic.twitter.com/NvFvOFPK0p

Chip Gaines also gushed at how their family was now “one stronger” and “blessed beyond belief” after Crew made his grand entrance into the world, showing that the family views each baby as a blessing.

And then there were 5.. The Gaines crew is now 1 stronger! 10 beautiful toes and 10 beautiful fingers all accounted for, and big momma is doing great! #blessedBeyondBelief

Earlier this year, the Gaines family got huge attention after announcing their pregnancy on Instagram, with a photo of Joanna with a baby bump, and the caption “party of 7.”

Gaines party of 7.. (If you’re still confused.. WE ARE PREGNANT) @joannagaines

The very next day, the couple shared a video gushing over their preborn baby. On Twitter, Joanna cooed over her son’s “little heartbeat” and swore that Chip could already tell that their preborn baby was a boy (and he was right!). In the video, viewers can see the baby’s rapid heartbeat, as well as tiny arms and legs.

.@chipgaines swears he can already tell it’s a boy. Look at the little heartbeat!! ??❤️❤️ #5 pic.twitter.com/bUwC3T91Cl

It’s insinuated that Crew’s pregnancy may have been a surprise, as the birth announcement says that his surprise delivery two weeks early was fitting, “given he was a sweet surprise from day one.” Yet the couple chose to welcome his life just as they welcomed their four other children, even in the midst of Joanna’s extremely busy and successful career — a star TV show, a design and renovation business, multiple best-selling books.

There are many abortion advocates who would argue that another baby would only slow the family down more, or that it’s irresponsible to have so many children, but the love that flows through the Gaines family is beyond evident, and they have shown that it’s possible to be successful in life while also raising a family — even a larger-than-average one.

As Joanna Gaines so beautifully shows, mothers don’t need to choose between their children and their careers.