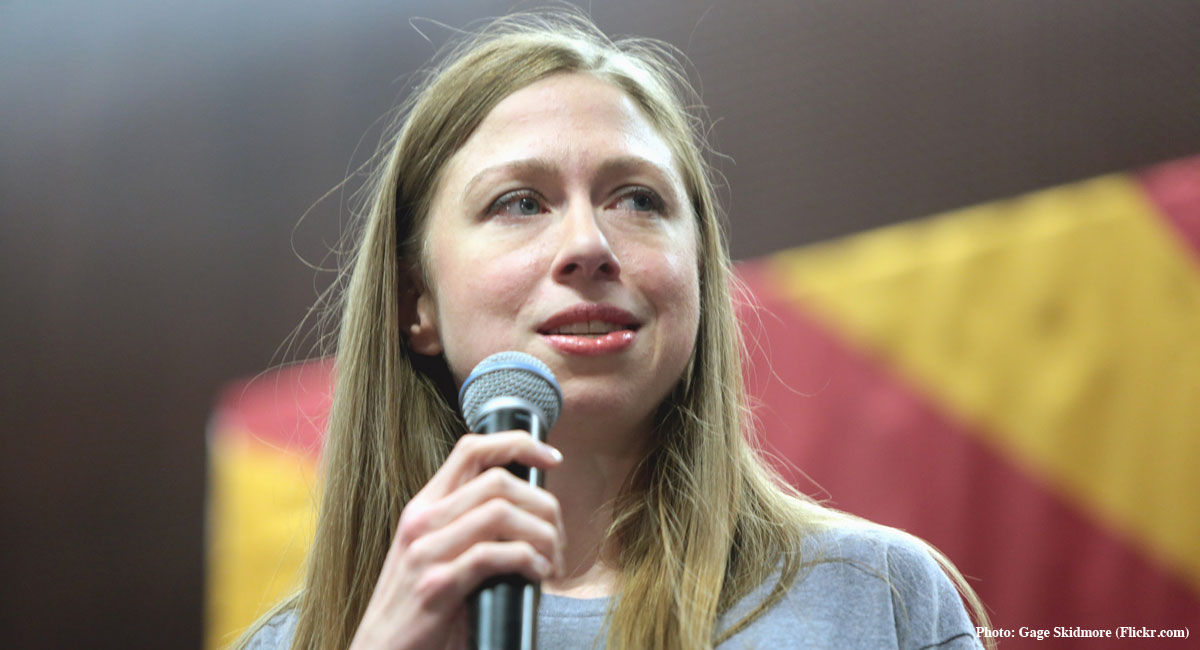 In a speech for a “Rise Up for Roe” event this past weekend, Chelsea Clinton told attendees that the abortion on demand implemented by Roe v. Wade has been a net positive for the U.S. economy. She said:

It is not a disconnected fact…that American women entering the labor force from 1973 to 2009 added three and a half trillion dollars to our economy. Right? The net, new entrance of women – that is not disconnected from the fact that Roe became the law of the land in January of 1973. So, I think, whatever it is that people say they care about, I think that you can connect to this issue.

Clinton never revealed where her three and a half trillion dollar statistic came from, and her claims are on shaky ground. Here’s why:

1. Clinton ignores the loss of human beings from the labor force because of Roe v. Wade.

Clinton’s economic assertions ignore the fact that the work force contributions of 60 million aborted children have been entirely snuffed out since 1973. The lack of necessary contributions by the younger generations is one of the reasons Social Security is in dire straits today. Of course, members of a generation cannot contribute if they are dead.

In a stunning piece of research, Mark A. Olson describes in detail how abortion — at a time when 50 million lives had been lost — had cost the U.S. over $16 trillion in federal revenue. As of April 2018, the public national debt of the U.S. was $15.3 trillion. Olson’s study further shows:

…[T]he figure of 50 million abortions far under-represents the cumulative population loss due to abortion, which [Olson] places at a staggering 126,469,904 as of January 1, 2014.

Based on this number, Olson applies the per capita individual tax burden to the lost population number for each year, a method which he says controls for other demographic variables. His finding: as of January 1, 2014, $15,734,000,000 in federal revenue has been lost due to abortion.

A press release… by Olson stated, ‘Basic macroeconomics says that any such loss in population will result in a collapse of the necessary aggregate supply and demand to sustain long term national economic growth. The population loss due to abortion would have the same negative economic impact as any population loss due to war, epidemic, or natural disaster.’

2. Clinton is completely wrong about abortion and the history of women in the work force.

Beyond the 60 million human beings Clinton ignores, she also misrepresents women in the workplace. Abortion on demand did not suddenly open up the work force to women. Chelsea Clinton forgets the contributions of women who worked hard to fight sexual discrimination in the workplace, the women who fought to open management positions to more women, and the women who decided that higher education was created not only for men, but also for women. These women did not open the doors of opportunity to their fellow women because Roe v. Wade brought abortion on demand, but instead, because they resisted inequality — many of them as wives and mothers.

Clinton attempts to oversimplify an equation she invents in her own mind: abortion on demand equals more women go to work. In 1986, “The Atlantic” published a scholarly article by George Guilder entitled, “Women in the Work Force.” Through research and cited statistics, Guilder described how women have, in fact, always worked — well before Roe v. Wade — and that the sexual revolution (which includes abortion on demand) falsely claims the Industrial Revolution’s statistics:

Many of the statistics that have been cited in the stories of sexual revolution are reflections instead of the Industrial Revolution. The entrance of women into the work force has accompanied, at a slower pace, their departure from farms. As recently as eighty years ago 36 percent of American families were engaged in agriculture; today fewer than three percent are. This shift is truly a revolution, and it has transformed the official labor statistics for women. Although these statistics show women entering the work force in record numbers, the fact is that women have always worked. Their labor on farms, however—in an array of arduous jobs beyond the hearth and cribside—;was never monitored by statisticians.

Even a brief look at history shows that women entered the work force in record numbers during and after World War II, decades prior to Roe and abortion on demand. Statistics also show that a huge proportion of these women were mothers. Even the U.S. Labor Department identifies World War II as the turning point for women’s increased employment outside the home.

Crediting Roe and abortion for women’s career and educational success is actually a slight to the women who put in the real effort to open new fields, more jobs, and better education for their fellow women.

Not only does Chelsea Clinton entirely ignore the potential economic contributions of 60 million people who were instead discarded — a number that is nearly 20 percent of the current U.S. population — but she also grossly misrepresents the real history of women’s rights and forgets the true heroines who fought to give women a new place in society.